Bank Street: Where do you even start?

Tomorrow night there's a public consultation on the plans for Bank Street between Riverside and Ledbury. The street is up - nay, far overdue - for "renewal," and I'm really hoping something actually comes of these consultations. In my fevered hopeful dreams, the whole street gets dug out, gutted, and replaced with something that isn't a nightmarish hellscape.

You'd think I was kidding, if you hadn't ridden down it lately.


Among the features of Bank Street which should die in an ALL-CONSUMING, PURIFYING FLAME are such elements as:
1) narrow sidewalks immediately abutting the roadway or separated only by barren asphalt kill strips;
2) broken pavement, potholes, and sunken drainage gratings;
3) lane widths that allow - nay, encourage - drivers to average about 75 km/h;
4) heavy truck traffic;
5) wide parking lot entrances crossing the sidewalk;
6) major intersections with those damn "eyebrows" allowing faster and more careless right turns and requiring pedestrians and cyclists going straight to cross three stretches of hostile pavement instead of just one;
7) drivers who are so pressured by the fast, heavy traffic to get through their turns into parking lots quickly that they cut off and endanger pedestrians;
8) a complete lack of reasonable lighting;
9) hydro poles and other utilities blocking entire sections of sidewalk; and
10) a sidewalk across the bridge to South Keys that is so narrow two people can't actually pass each other going opposite directions.

It's also just plain fugly, but I guess you could argue that ugly never killed anyone. But then, maybe it does. Maybe it's part of the reason the whole street feels so antagonistic, for everyone. It's not pleasant to drive on, it's downright unpleasant to walk on, and it's scary enough to bike on that most of my friends who live in my neighbourhood, and who have expressed an interest in riding, don't ride - like, at all - because there's no sensible way to avoid Bank Street.

So. There is a consultation tomorrow, at Jim Durrell Recreation Centre, from 6:00 to 8:30. I'm so there. And in advance, I'm reading through the presentation given back in June about this.

This street has been in discussion for about ten years, and there have been a few studies so far to look at what is falling apart (the pavement, underground utilities) and what the future needs of the area are going to be. Really, the main issue with Bank Street is that it is a) an arterial route for cars, b) a key transit route, and c) a spine route on the cycling network. And all of that is because it's the only road that crosses all three of the main barriers in this part of the city - the CPR rail line, the Rideau River, and the Rideau Canal. There is really no other practical way for people from South Keys to get to Old Ottawa South, the Glebe, or downtown. Or vice versa. By any means.

So, it needs to be able to accommodate more than just cars. It needs to be - dun dun DUN!!! - a Complete Street.

Which is something the City (theoretically) decided on back in 2013. A complete street has to balance the needs of different modes of travel and hopefully come up with something that is safest for all. When they developed the complete streets model, they also adopted Multimodal Level of Service (MMLOS) guidelines.

These guidelines are a newish thing in Ottawa, and encouraging to see. They basically force you to assess trade-offs in comfort and safety across modes. The grades in the chart below go from A (convenient, comfortable, safe) to F (long delays, high stress, unsafe). 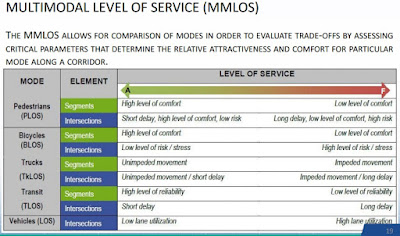 And they've done an analysis of Bank Street as it stands now, and the targets they want to hit. It's extremely telling. 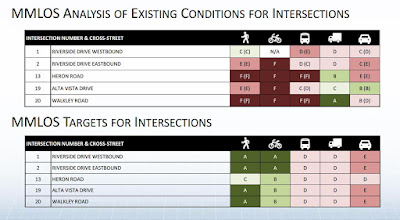 This is the analysis of five intersections with Bank: Riverside westbound and eastbound, Heron Road, Alta Vista Drive, and Walkley Road. If you can't read it, the dark burgundy represents an "F." Dark green is an "A." The shades in between go from E/F (rose) through B (light green).

I have, in fact, made left turns at this intersection on a bike, in the traffic lanes. But I have since found ways to avoid going anywhere near it so I don't ever, ever have to. So I encounter this intersection on foot, mostly. And it's nasty. Not only are the signal intervals uncomfortably long while you huddle on the islands after having scuttled across those right turn lanes, but sometimes the crosswalk lights don't actually work on one side of Walkley and you wait through a cycle or two before figuring it out. People frequently do that thing where you cross half of the intersection while the advance-left is on, so there's time to finish crossing when you actually get the light.

Anyway. Back to MMLOS. This is the same two charts - existing conditions and targets - for segments of the road rather than intersections. 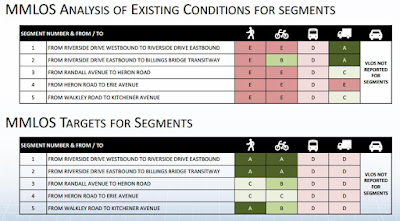 That lone, floating "B" grade for bikes, in the top chart, represents the section of the street that runs past Billings Bridge Mall, where there is a bike lane, coated in bright green thermoplast wherever it crosses a merge lane or intersection. And yes, that bike lane is a huge improvement on the street. I'm lots more comfortable on it, even if traffic zips past me at high speed. It vanishes, however, south of about Ohio. And you will note that the whole stretch is universally bad for pedestrians. The only A grades? For trucks, at the north end of the street, starting at Riverside westbound (at which intersection Meg Dussault, of #megsbike, was killed three and a half years ago. By a truck.)

The targets are much more hopeful, looking toward better pedestrian and bike experiences, particularly around Billings Bridge Mall (currently a hotspot on the map of reported collisions involving cyclists and pedestrians) and from Walkley to Kitchener. I can see why those areas are priorities. Across from Billings Bridge there is a cluster of high rise apartment buildings. People are constantly ducking across the street to get to the mall and to the Transitway station. Between Walkley and Kitchener there is the local MP's office, a Shoppers Drug Mart, the Beer Store and LCBO, an optician, a consignment store, a couple of auto body shops, a mini mall with all sorts of services, a few restaurants, the Home Depot. When I walk in my neighbourhood it's usually in that area, to get to the shops. And it's the worst area to walk.

So how do we fix this car-centric pavement-veldt where the strongest, fastest and heaviest prevail?

The initial design plans I've seen involve narrowing the car lanes a bit, carving out a bike lane on either side of the street, and adding a bit of boulevard space between the curb and sidewalk. Not a huge change, really, but if the lanes in front of Billings Bridge are any indication, they do make a difference. Paint may not really protect you from anything, but it does help to nudge the position of drivers on the road so you get a bit more space. And the green paint makes the intersections along that stretch feel just a little less hazardous.

It's always seemed clear to me that you could hack out a bike lane from the existing roadway on Bank Street and never have to move a curb. The current roadway is, in one studied stretch, 20.8m wide, for four lanes of car traffic (broken down, that's more than 5 metres of space per car. Allow my eyes to roll at the type of giant baby that can't handle a car in less than 15 feet of space).

The outside lanes are 4.5m wide, the inner lanes 3.25, with a median between them that's 4.5 m wide as well. If you just took the outside car lanes down to 3.25, which is clearly a completely reasonable width, because one lane is already that wide (and well within lane width targets if I read the charts right), you'd gain 1.25 m for a bike lane. And that's without touching the vast median.

Big wide medians that keep cars going in opposite directions from getting anywhere near each other do one thing: they allow drivers to feel nice and safe going at speeds well above the speed limit. Like 30 to 40 km/h faster. Which they do. It's really not uncommon or shocking to find someone going 80 or 90 along Bank between Billings and Walkley, where the limit is 50. Narrow or get ride of the median, the drivers slow down, and you've gained even more real estate for your bike lanes.

Maybe even enough to make them separated and protected. A raised, quieter, safer buffer between the pedestrians on the sidewalk and the motor traffic. 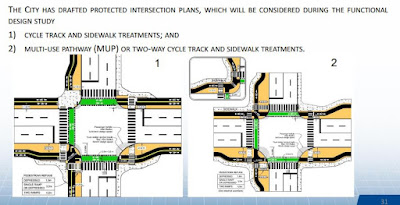 A raised cycle track on Bank. I could only dream. Oh, wait. I spotted, and made some noise about converting, those paved kill strips a year or so ago, didn't I? If we're already digging up the street we could move the hydro poles and voila, a cycle track. (I think any recommendations about burying the lines have been shelved, alas, but we'll see at the consultation).

I expect that the bike lanes won't come up against the usual business-owner objections about parking, because there is no parking on Bank. . . but I can already hear the furor over having them cross the entrances to parking lots. Especially ones like the Beer Store, where most of the length of the store's property is made up of access to the road, and the LCBO just down the street, which has three different accesses to its parking lot and already has its fair share of accidents because people don't know which to treat as an entrance and which as an exit.

Still, the objections, I imagine, will be about safety and logistics, and not about bike lanes driving away parking customers. At least, I can hope not.

Sharper right turns (i.e., not rounding off the intersections and allowing right-turning cars to have their own mini merge lane) will probably piss off some drivers too, particularly truck drivers (and I'm not sure how you accommodate transport trucks in this design. Which you probably have to, since Walkley and Bank both have highway ramps on them and there are so many large stores along the street...)

But regular car drivers would just have to suck it up and make more careful turns, and that will anger some of them. I've heard that complaint about the O'Connor lane already from some drivers. "The turns are so sharp and they've got these big curbs so if you don't stop and go through the turn really slowly, you could scrape your car!" one co-worker said to me.

Anyway, so far all I've got to go on is this summer's presentation. I'll know more tomorrow night. I'm trying to get straight in my head what I think would work and what's actually likely to happen (this city can talk a good game in the planning stages and then somehow totally lose the plot until you have Booth Street on your hands, after all). It's a great big complicated bunch of tradeoffs, but it's always been clear to me that there has always been the space for a complete street on Bank. The real estate is there. It's just the will to reallocate it. And the improvement could be so huge. I'll keep my hopes up: I might as well.