So, some nice folks in France have sort of achieved the Better Mousetrap of cycling: a folding helmet. It doesn't pack down as tiny as, say, the Hövding, a collar-mounted inflatable 'airbag' helmet. But, to be honest, even having seen all the crash test footage, I'm not sure I would totally trust the Hövding. Plus, this foldable number looks pretty cool. 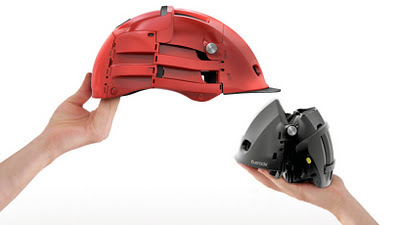 What also interests me is that in both cases, one of the first things people note as an advantage is the bike share scenario. People using bike share programs don't necessarily plan ahead for it, or want to carry helmets around with them. Hell, I don't particularly enjoy it: finding a place at the restaurant to discreetly stash my helmet (and gloves, and removable headlights); clipping the chin strap to the back of my backpack and having it bounce about back there; dropping the helmet in my shopping basket and then having to stack my groceries in around it. No, it's not a massive problem, but it's an inconvenience. This helmet actually packs down small enough that if I put it in my bag, there would also be room for, gasp, other things. Want one.
Posted by Kate (and Mike) at 7:44 AM No comments:

I blew a tire, some days ago. (So badly, not even The Goop could save it: in fact, The Goop oozed unpleasantly out through the gap at the base of the valve when I did change the tire.) And between not really finding the time to fix it and the hideous set of winter storms that descended on Ottawa, turning the streets into, alternately, epic giant Slushies or treacherous ice rinks, I spent a few days taking the bus.

And I was reminded, a couple of times, why I decided not to go back to riding the bus, three winters ago. Once, when I accidentally caught a 144 instead of a 114 and wound up in the furthermost bowels of southern suburban Ottawa, ending up about two hours late for a party. Once, when I was running a little late for my radio show, the bus I was hoping to catch didn't appear, and I spent a quite unpleasant thirty minutes playing the guessing game about whether to get off the bus and take my chances with finding a taxi, or to risk not making the next connection. Which bus to take, and what route my chances would be better with. Once, on Saturday night around midnight, when my feet were killing me after helping to run a fundraiser for about 7 hours, and my iPhone was telling me I'd missed the last direct bus home and would have to walk another 20 minutes or half an hour from Walkley Station, carrying a ballot box, in bad shoes. (I didn't miss the bus: turns out the OC Transpo website is no help for figuring out when the last buses are. Trust the posters in the stations. The posters are more or less accurate.)

But yesterday evening I replaced the tire. And today, I was reminded, not of why I stopped taking the bus, but why I didn't stop riding, three winters ago. I rolled the bike across the caked ice on my building's front step. I put it on the pavement in the driveway. I swung a leg up over, and pedaled off into the street.

What a wonderful feeling biking is. It becomes sort of second nature, so you don't really realize it, but when you stop to think about it, it's pretty damn cool. I've been running three days a week lately, and maybe that's also part of why it felt so good to get on the bike. When you run, there's that jolt as your feet hit the ground. You move forward only as fast as your legs can take you. I, personally, feel most of the time as though I'm lurching along when I run. On the bike, I could feel the amplification of the force from my legs driving the back wheel, floating me along. That comfortable circle of my feet on the pedals. Going faster than my feet could take me. I think I felt for a moment what the first 'wheelers' would have felt like: this machine is sheer magic.
Posted by Kate (and Mike) at 8:12 PM No comments:

Bikeverse forgive me, for I have sinned.

It's been at least a season since my last confession. Today, I rode on the sidewalk all the way home from work. To be fair, it was dark, and my taillight had burnt out, and I figured I was probably better off riding illegally on the sidewalk than invisibly on the icy street. I did stop whenever it looked like I was even close to making a pedestrian step aside, and I called out "Passing on the left!" whenever I needed to. I waited at the crosswalks, and yielded to cars. But the sin still stands: I rode on the sidewalk.

I let my taillight burn out. I know, I shouldn't have. I have batteries in the kitchen drawer, I swear I do.

I have also, at times, ridden through stop signs, only slowing up a little and looking to left and right along the intersection. I know it's wrong. But acceleration takes a long time, and I worry that while I'm stopped a car will arrive and then no one will know what to do exactly and there will be that moment of "you go; no, you go; no, it's your right of way;" which is confusing for both sides... so if there are no cars coming, well, I ride through the stop sign.

Sometimes, just sometimes, I've even run red lights - but only at T intersections when there are no cars coming and I'm not turning. Or at lights that signal only pedestrian crossings, when there are no pedestrians. I always feel bad immediately, though, if that helps.

Bikeverse, forgive me; once or twice I hopped onto the sidewalk to pass stopped traffic on Main Street at rush hour, when there were cars sitting idling with their sidewalls six inches from the curb. I didn't wait, like a virtuous member of traffic, in the clouds of exhaust, behind them. I tried hard not to do it for long, and I always dropped back onto the street when there was room, but I did pass on the sidewalk. I also tried not to draw attention to the fact that I was moving and they weren't, because I know, Bikeverse, that smugness is also a sin, and makes drivers hate us and call us "self-righteous elites."

I also jumped on and off the sidewalk one summer day when I was putting up posters downtown. It was wrong of me. I know that. But it was a beautiful day and I was feeling free.

I have used the pedestrian crosswalk to make a left. The cars were just too many, and too fast, and merging left across two or three lanes gave me the willies. I've even, I have to confess, thought to myself that the rule ought to be that bikes do that all the time to make lefts: as they do where there are "bike boxes."

I usually cut through the parking lot at Cambridge and Somerset, beneath the Chinatown Gate, to go to a friend's house. It probably isn't even any shorter. And I don't always signal right turns. Sometimes you want both hands on the handlebars, and right turns are really less of a shock to motorists than left turns, right? I do always signal lefts. (When I don't use the crosswalk, that is.)

And sometimes I don't take my lane: sometimes I let the cars crowd me nearly into the curb. I am heartily sorry, but some days are bolder than others. I hope you can understand this, Bikeverse. I don't mean to do these things (mostly.) I just wanted to get it off my chest, because all these things ran through my head, today, as I rode home on the sidewalk, wanting to stop and explain to everyone who saw me that it was really, honestly, because my taillight was out, and I'm not normally like this.

So I just thought you ought to know. I've got a bike chain I could use as a rosary if you want to assign me penance. But you know we do all do this stuff, right? I just wanted to come clean. I feel better now.

What am I thinking?

"What am I thinking?" I asked myself yesterday, as I trudged across campus in the freezing wind with the tears that were being squeezed from my eyes crystallizing and sticking my eyelids together. I wasn't on my bike because I'd only just flown back from New Brunswick that morning, and I needed to be at work right after arrival, so had cabbed over from the airport. And I was thinking about the fact that I'd just told my coworkers that I'd be riding in to work the next morning.

But it was cold. Really cold. -29C with the wind chill then, and people were telling me it would be even colder the next day. I stopped on the way home to buy windproof gloves, knowing I'd want them in the morning, and asked myself again, "What am I thinking?"

Up before dawn this morning, I listened to the radio people telling me that it was around -27C out there. I dug my Icebreaker tights out of the dresser, asking myself again just what the hell I was thinking, and pulled on tights, merino shirt, pants, sweater, and coat. Hat for under the helmet, and a huge scarf a friend made for me tied around my neck. Overheating and clumsy with all my layers on, I pulled the bike out though the door. What the hell . . . I thought again, and, sweating, went downstairs.

I set my bike on the road and realized my tires were a bit squishy - good for traction on the icy roads but not so great for speed. I tried to look behind me to merge left, and the hat, scarf, jacket, sweater and everything else made it look a bit like Michael Keaton's Batman trying to look behind himself. Full upper-torso twist. The sides of the road were icy and the traffic didn't seem to slow up much, and my breath froze on my glasses till I got up speed enough that my breath blew behind me, where it formed a white rime on the scarf.

I got to the left turn off Bank onto Cameron, which is usually a separated lane for a few feet. The separated lane did not exist. I made the left and found myself on the plowed sidewalk instead. At the nearest opportunity I got back into the road, planning my "yes, officer, I know but..." explanation for why I was going the wrong way down the cars' side of the road (the contra-flow bike lane was buried.) What was I thinking, when all the bike lanes are buried in snow?

And then I was on the iced-over path through Brewer Park heading for Carleton, and I saw the only other cyclist I'd seen that morning, coming along the path toward me, face half hidden in a black scarf, crunching over the frozen snow. I waved as he got close: he raised his fist in a "right on!" sort of gesture.

And I grinned all the rest of the way to work. That's what I'd been thinking.
Posted by Kate (and Mike) at 3:48 PM 2 comments: