I got home tonight, switched on my computer, and spotted the following two posts on Twitter, both by someone named @taybridge:

Tweet the First: "#ottbike - Dear bonehead. Passing on the shared path with inches to spare and almost clipping me and a runner is stupid. Smarten up."

Okay, fair enough, can't argue with sharing the multi-use paths. But then he follows it up, literally less than a minute later, with:

Tweet the Second: "#ottbike - One more thing about the path. The parkway has two paths. Why, during rush hour, stupid cyclist, are you riding on the road? Argh"

Well, I didn't answer either one (although I almost answered the second. But 140 characters isn't enough time to explain that sometimes you wind up on the parkway because the path isn't going where you need to go, etc. etc.) I'd like to mention, though, that these two comments, hard on each other's heels, are a bit depressing to me. To this guy, bikes shouldn't be on the path, because they're dangerous to joggers and walkers, and shouldn't be on the road, because they should be on the path.

Circular much? What you're telling me, @taybridge, is that bikes don't belong anywhere. And that's why I'm not getting into it with you.
Posted by Kate (and Mike) at 7:19 PM 3 comments:

I mean, of course, the comments on any article about cycling, or bike lanes, or sharing the road. I know I shouldn't look, because I'm just going to run into an ugly stream of vitriol, anger, and threats of violence. On both sides. Cyclists will be accused of being smug and self-righteous, and the cyclists in turn will proceed to prove those accusations right by telling drivers that they're fat, lazy, and polluting the planet.

But then, I came across a comment thread that was getting the full back-and-forth flame treatment (you've all seen the kind of thing that gets said by anonymous jackasses) and someone, bless him, said something along the lines of, "Alright, I submit here the only possible response, for your reading pleasure," with a link to this archive.

It was just what I needed. Hilariously overblown Mad Max ultraviolence. A little fantasy fulfilment that takes the whole us-and-them hyperbole that always erupts in these comments, and extrapolates it. Here's your 'war on bikes,' and your 'war on cars.' Besides, it has a wry sense of humour that really endears it to me somehow. It catches the lunatic feel of 80's road warrior movies, and just in case you've ever fumed silently and helplessly as some jerk cut you off or buzzed you or hollered out their window trying to startle you into falling... this is guaranteed to be way more violent than anything you might have pictured yourself doing. And it's funny.

The paragraph that won me over:

A bike kennel in Fredericton

My dad sent me this picture a couple of days ago: secure bike parking in my home town, Fredericton, NB. 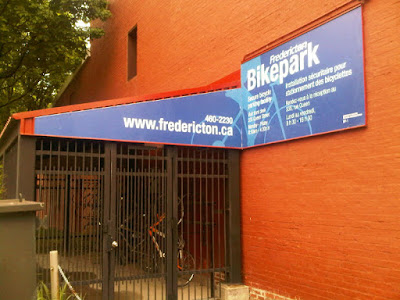 I don't know for sure how it works (do you need a key to the 'kennel', or is there staff, or what?) but it struck me that I don't see these in Ottawa, which is arguably a more bike-friendly town (and probably has a higher rate of bike theft too). Not that Fredericton is huge, or hostile to bikes, but I don't remember ever seeing a bike lane there, and it is built on a great huge hill, which was definitely a deterrent to me as a kid, when I entertained the notion of bringing my bike in to town to get around on. But, lookee here, public bike parking. Which I would love to have access to in Ottawa (when I got a job recently on Elgin Street, about the third thing I asked my new boss was if it would be okay for me to bring my bike into the store and stash it in the staffroom. I've had too many headlights stolen to feel safe leaving him outside at night...)
Posted by Kate (and Mike) at 4:37 PM 4 comments:

I was walking down Elgin this afternoon and I spotted this headline in the Ottawa Sun box. I had to stop and take the picture. 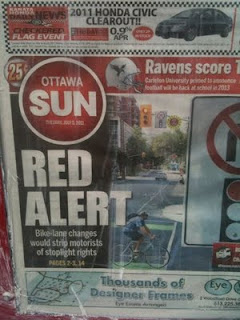 "Bike-lane changes would strip motorists of stoplight rights!" it says, there, underneath the screaming "RED ALERT."

I had to laugh. And get annoyed. And shake my head. All in one. Which made me look very silly, I'm sure, standing there on the sidewalk. Actually, crouching so I could snap the photo of the box. Anyway, I posted the picture to Twitter, with a comment along the lines of "Seriously, Ottawa Sun? Those nasty bikes are going to take away our god-given right to turn right on red? OH NOES!"

I appear to have struck a nerve, anyway - quite a few retweets, most in agreement. One, apparently in favour of the headline, pointing out that the bike lanes are inside all right turns regardless of whether the light is red or green. (I still don't see the problem, as bikes have to stop on red too, but hey.) What really amazes me about this, and about the headline from yesterday saying that the new Laurier lanes are going to impede emergency vehicles (I also tweeted about that, with a similar amount of scoff) is that it's got to be a slow news week or something if the media is having to invent controversy over the lanes. Which open Sunday, and with luck these stories will fade into history once they do.

Please note: I'm not expecting the earth to move, the sun to go dark, or cars everywhere to raise their mechanical little voices in despairing screams on Sunday, either. I just expect to see more bikes inside the concrete barrier, once they remove the pylons.
Posted by Kate (and Mike) at 7:24 PM 4 comments: