In the early morning rain 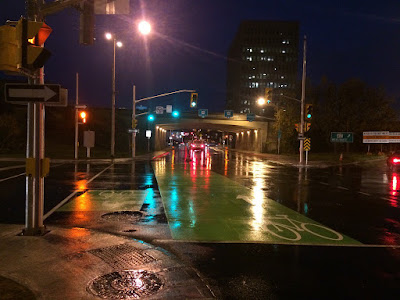 It was still raining when my alarm went off at a quarter to six this morning. But then, I'd expected as much. It's apparently going to rain for about four days. It's October. These things happen.

It's also really dark that early in the morning. But at about 6:15, when I left the house, traffic was blessedly quiet, which was good, because I was out in the middle of the lane on Heron to avoid the puddles (you never know what's under the water, and the potholes on Heron are epic). 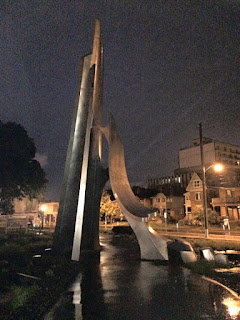 I took Bank past Lansdowne and only jumped onto the convenient shared sidewalk once, to skip past a bus picking up passengers. Then it was off to the corner of Catherine and O'Connor to meet up with Hallie Cotnam, from CBC Ottawa Morning, and JP (better known to Twitter as @MrOneWheelDrive).

I got there early, so I got to go a little further up along the lane, and then go hide out underneath the Museum of Nature's iceberg sculpture. I hadn't really been up close to it before: it's a beautiful piece. And it provided a little shelter from the chilly rain. I also pedaled around the new Museum gardens and read a couple of the information panels by the light of my headlamp.

One of the cool things about going places by bike: you can stop and poke around. Even if it's 6:45 in the morning, still dark, and raining.

After a bit, I headed back to the corner, propped my bike up against a wall, and then spotted JP rolling along O'Connor in my direction. We said hi, waited a little bit, and then Hallie appeared, toting the CBC field kit - a briefcase packed with all kinds of telecommunications stuff - and a transparent plastic umbrella.

We talked a bit about the lane while we waited for the green light from the station, and Hallie got a photo of the two of us to post on Twitter. 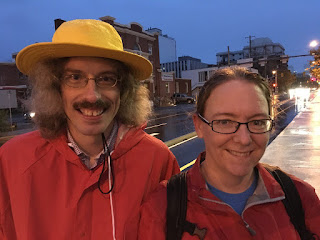 One kind of funny thing was that we all more or less knew each other from Twitter (well, and we knew Hallie from listening to her on the radio) but I'm not sure I had ever really been introduced to JP. Still, we all knew each other from #ottbike, so it wasn't like we were strangers. 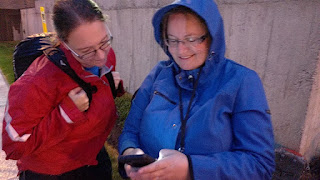 We got a couple of other photos and tweeted them out before the interview actually kicked off. Then Hallie got the headphones out, and we all huddled under the plastic umbrella (which I was sort of holding over the field kit, although it wasn't raining hard at that point) and had a chat about the lane.

It's hard to know for sure yet where the problem points will be, and I'm sure there may be some. But for now, O'Connor actually feels safer than Laurier - mostly because there are fewer driveways and turnings but also, since O'Connor is one-way for cars, the cars aren't crossing the bike lane from all possible directions. It's less busy as well, with fewer pedestrians ducking across and fewer cars turning at the entrances to loading docks and parking garages.

And the advance lights for bikes actually made me giggle as I crossed Isabella and went from two-way South O'Connor to one-way North O'Connor, across the highway ramp. I honestly felt as though I was getting away with something.

After the interview, we talked a little longer and then I headed off northward in search of breakfast and coffee. On the way, I passed someone in a yellow vest who waved at me as I passed. I grinned and waved back, then stopped, turned, and circled back to ask what was up (seriously you guys not enough has been said about the fact that you can just change directions on the O'Connor lane and you don't have to use a crosswalk or wait for a light or anything you can just double back).

It was Kathleen Wilker, who I know through Citizens for Safe Cycling, but who was there with EnviroCentre. They had people stationed at the intersection to wave and welcome cyclists to the new lane, and also to explain the bike boxes, installed so you can make left turns, in case anyone didn't know how to use them. I think she said they'd be out handing out coffee the next morning, as well. Even in the chilly rain, she was still pretty cheerful.

Then I rode on to the intersection with Laurier, turned left and dropped my bike off at the Centretown BUZZ office, and went over to Minto Place in search of a hot breakfast and a very large coffee.
Posted by Kathryn Hunt at 7:07 PM