Checking out the new lights on O'Connor. . .

I was running down O'Connor this evening and I passed the new "smart bollards" at Waverley. I'd seen in passing that they'd been launched today, but hadn't given it much thought, till suddenly they lit up as I got close to Waverley and flashed as I crossed the intersection.

It was neat to see them. I talked about these with someone from the City at the Winter Bike Parade event last winter, and the idea sounded cool. The bollards, which are provided by a local company called SmartCone, use heat and motion detectors, so they're not triggered by cars, but they are triggered by cyclists, skateboarders, and people in wheelchairs, all of whom use the O'Connor lane. As you approach, they light up and flash, to give drivers that extra alert to your presence, which is probably even more reassuring after dark.

What the hell, Heron?

I have wanted so much to be happy about the small gains of the Heron Road cycle track. Despite the fact that it's only on one side of the road, it's only 800 metres long, and it connects the Heron Gate Mall to precisely nothing (well, okay, to the MUP through the greenspace between Finn Court and the community centre, I suppose). It is low hanging fruit, I get that. It was half built already, but then we knew this, because I and others pointed it out last year, and that's why anything at all has been put in. It's something, at least, on a terrible, unbearably hostile bit of road.

What. Seriously. Was. The. Rationale. This not only makes it dangerous for cyclists and for drivers, it also throws a wrench into any opportunity to extend this lane a little further west to Alta Vista, which is the obvious next cycling connection point.

I drove past it today. If anything, it's worse from the point of view of a driver. Don't just take it from me: there's a whole conversation on reddit about how messed up this is. My favorite comment:


That stretch is rather funny now.
Some people in the left lane don't realize that the lane bends over a little bit because of the curb so they think people in the right lane are attempting a lane change/cutting them off; many honks to be heard. Some people in the right lane don't notice the curb until its too late and make an erratic move to avoid it and I've seen people bump right over it.
Then at the Baycrest, Sandlewood, Herongate intersections with Heron, its not immediately clear that its a bike lane they've created because they haven't painted the appropriate lines or placed signage and so some drivers seem to think its a right turn lane to turn onto the streets/into Herongate Mall and I've seen bikers get cutoff quite often.

This is seriously dangerous.

And it definitely didn't look like that in the designs posted by the City: 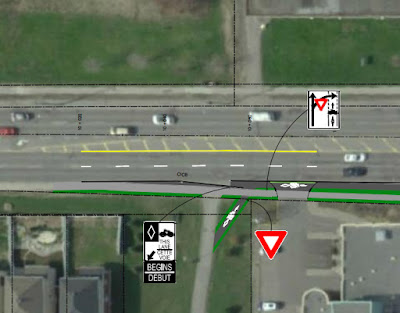 The bike lane descending to grade just before the intersections is another confusing detail. Without paint (I assume the paint and signage are yet to come) it really is unclear what that is. It does look like a right turn lane. Albeit a narrow one, shared with bikes. In fact:


My brother commented on that. Driver passed him on right to make right turn while he was stopped at a red light. There never was a right 1/
— Bicycle Seen (@frpaul1) October 9, 2017

So the bike lane turns into a right-turn lane, but one that happens to also have bikes going straight on it. I can hear the explanation: drivers are meant to yield to cyclists, who will then take the lane. Except we know what will happen is that drivers will be honking their horns behind cyclists at red lights trying to get them to move out of "their way" so they can turn right, or they will be trying to pass cyclists and other cars on the right. This is infrastructure based on the "if everyone just" model. And as a wise person recently said on Twitter, everyone does not just. Everyone has never just. You should never build road designs based on everyone behaving properly. You should always assume that people are stupid, or ignorant, or distracted, and make mistakes.

And it wasn't like that before. Before, the intersections had plain old, ordinary right turns on them.


turning lane there before. Compare a screen grab of Kate's video and Google Street view at Heron/Sandlewood. Diagram shows this will have 2/ pic.twitter.com/R4xyIbQgYr
— Bicycle Seen (@frpaul1) October 9, 2017

And then the bike lane comes to an end well before the entrance to the mall, dropping cyclists into the right turn lane to share with car traffic. If the cyclist's eventual destination is not the mall - say, they're trying to get a block or so east to Conroy, where there's a painted bike lane - they have to merge across that lane and join the traffic on the other side of the turn lane.


Like I said, I wanted to be happy about this lane. I've been pulling for it. But I can't see that it improves Heron much at all. If anything, I think it creates more potential for conflict than just riding in the narrow (scary) traffic lanes. Especially since most cyclists (I predict) will still be riding on the sidewalk in both directions, with a few taking the bike lane and some staying in the road, which will make them even less easy to predict.

What I pictured, when we first started talking about repurposing those paved stretches at the side of the road, was a separated track, on both sides of the road, with protected intersections, which connected the bike lanes on Alta Vista and Conroy and gave people a reasonable link to some of the MUP connections to Pleasant Park and the rest of Guildwood. What we got was this, because of budget and design area boundaries (and whoever signed off on building that curb out into an arterial street).

It's discouraging.
Posted by Kathryn Hunt at 6:46 PM 1 comment: