I don't believe it.

I just spotted this article in the Seattle Times: Black Hawk, Colorado has banned bicycles.

Why? Because the streets are narrow, and the town is full of casinos and therefore overrun with tour buses in the summer months. (Never mind that it's also on a very popular touring route, and cycling is a big thing in Colorado. I understand that gambling dollars trump whatever money you can squeeze out of banana-packing, camelbak-wearing Lycra-clad cyclists.) They claim that "...the [State] Legislature, at the prodding of cycling groups, passed a law in 2009 requiring that motorists give bikes 3 feet of space if passing. That would force traffic in parts of Black Hawk to veer into the wrong side of the road..."

Oh nos! Three feet of space! The wrong side of the road! Wait, when I'm driving and passing a cyclist, I pull out into the oncoming lane (given there's no oncoming cars in said lane) pretty much any time I can. So do many other motorists I know. Oh, and wait, I just spent a couple of weeks this summer in Scotland, where if you get outside the towns, most roads are only one lane - and a narrow lane at that, almost too narrow for an American SUV, with virtually no shoulder. What do Scottish motorists do when there are bikes using the roads? They slow down, treat the bike like any other vehicle, and wait until they get to one of the widened "passing places" before pulling out past the bike and moving on. And - get this - none of them suffers convulsive head implosion from the enforced deceleration.

Now, the town of Black Hawk apparently has a population of a little over 100, but enough casinos to warrant being very, very nice to the tour buses. If the town is that size, couldn't the tour buses park on the outskirts, and the gaggles of happy gamblers walk to their casinos of choice? Or take the free tram line that is already in place? Or maybe, since Colorado is a cyclists' paradise, maybe Bixi or some other bike share company could set up a rack of share bikes in the parking lots. The gamblers could get a taste of life in Colorado, and a little fresh air before setting up shop in front of the slot machines. Black Hawk could even put in a water bar where at the end of their grueling half-mile journey, they could get designer water and hand-picked bananas or locally-formed energy bars. It's a win-win.
Posted by Kate (and Mike) at 8:48 AM No comments:

What word better sums up the image of a happy and contented Ottawa than that? Really! The sun is shining, it's late summer, there's a looming but yet still oddly distant mayoral race coming on, and someone, somewhere, is having a public consultation. All's well in the nation's capital.

But sarcasm aside, I did go and fill out this survey, on the City of Ottawa website. If you live here, you should too. They're looking for input from cyclists for an evaluation of cycling safety in the city. Really, I don't actually have that many complaints: not anything that the City can do much about, at any rate. But I did go, and sign in, and include my $0.02 (mostly about the Queen Elizabeth/Colonel By pedestrian and cyclist crossings). If nothing else, the number of people that fill in this survey will give the city a better idea of how many of us are out there.

Good news, too: they're aware of Ottawa Biking Problems, which is a well-nigh overwhelming compendium of cyclists' trouble spots, as well as being a discussion forum. So when you've filled in your survey, cruise on over there and see if you can add to the brainstorming.
Posted by Kate (and Mike) at 12:08 PM 1 comment:

Yup, I'm in Scotland. I had to share this: I was walking around near the University of Aberdeen (in the north end of the city) and I found BeCyCle! I had mentioned this place before on this blog - a bike co-operative that a student of my sister's had been involved with, who, among other things, collect abandoned bikes, refurbish them, then lend them out for free. Anyway, after a really nice walk along the River Don, my sister and I were heading back toward campus (in search of a pint at the local) and stumbled upon it! Here it is, in situ (you can't quite see the hand-lettered wooden sign with the website written on it, by that open doorway. I didn't see any folks around, but I could spot some bike bits inside!): 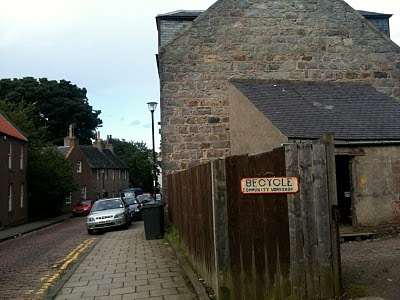 Another note: given my one day of experience in Scotland, I do have to say that cobblestones look fairly uncomfortable to ride on: and having walked along one of the bike paths today, the 'rules' seem to also be kind of haphazard. I'm used to some pretty strict "keep right" rules on the rec paths in Ottawa: those rules don't really seem to get applied here. It doesn't help, I suppose, that on hearing a bike bell 'ting' behind me, I jumped to the right, not the left, to get out of the way. I felt bad, and silly, and foreign, for about thirty seconds - until I realized that no one on the path seemed to be keeping to any side at all. Ah. So that's how it's gonna be. I feel less like a clod.
Posted by Kate (and Mike) at 3:36 PM 3 comments:

Words of Advice for TO, Mukluks, and Scotland

I came across this article a few days ago: kind words of advice from a Montrealer to Torontonians who are about to encounter Bixi. I thought it was cute. Plus, hooray for Toronto for getting Bixi. It's a town that does lend itself to getting around by bike, as my brother found when he was living there: you can use side streets and paths to get almost anywhere (unlike Ottawa, where outside of the downtown core the side streets don't cross the waterways that run through the city, so you're forced onto bigger streets.)

On a completely different note, Salsa Cycles just introduced a snow bike that looks really cool for all kinds of terrain, not just snow: the Mukluk. Check it out here: I know it's hard to think about snow at the beginning of August (even if the cicadas have started buzzing and the nights have started getting cooler) but think about what this bike might do on sand, dirt, debris, gravel. If I was rich, I'd be looking at a bike like this for the winter, and then once I had it, I'd start itching to do some massive offroading. (Once, last summer, I decided to try one of the ski paths at Mer Bleue Bog, which are nominally hiking trails but actually sit under about six inches of water and muck for most of the trail, and are knee-high in grasses and weeds. I was dragged to a slogging halt, and finally gave up halfway to bushwhack my way back to the road, spattered with mud to the shoulders. Now with one of these bikes, I'd totally give that trail another shot.... on a day when I didn't mind getting really dirty.)

And this might be my last post for a little while: I'm heading to Scotland for a couple of weeks to visit my sister and her husband! I can't say that I won't be posting (apparently there are some great bike routes in Scotland) but I make no promises. I may be way too busy having fun!
Posted by Kate (and Mike) at 6:05 PM 1 comment: