27 miles in the rain

... that's how much I racked up in a day of doing stuff on my bike. Normally, I don't even think about how much ground I cover, but I was curious today, because it was a fairly busy day... so I plugged my route into MapMyRide, and that's what came up: 27 miles, give or take. The distance can really add up when you have a bunch of stuff to do. If I were to set out to do a 27-mile ride, I'd feel like I was taking on something major. But when I left the house this morning, I didn't give it a second thought. (Although I admit that since it was sullenly raining and looked like it would keep raining most of the day, I had fleeting thoughts about taking the car. But no: I had no real reason to take the car, and many reasons to ride.)

Where does all the mileage come from? I wondered... well, that 27 miles included:

1. A run out to Hawthorne (in the hellish wilds of the southern industrial parks) to pick up a package from the CanPar depot, which turned out to be a press release. Really. A press release, and a CD, from TVO (who knew TVO even still existed?) about a new drama series. I mean, who does that? Besides, the run out to Hawthorne is hellish even when it's not raining. I hate industrial parks. Transport and heavy cargo trucks, a highway exit, two main artery roads, magically appearing and disappearing bike lanes, and appalling pavement. I actually just shouted for a couple hundred metres just to get it out of my system on the way down Russell Road (which has a thick edge of asphalt and a broken, gravel shoulder.)
2. From Hawthorne, along St Laurent, Smyth and Main, and downtown to meet friends for lunch: a decent spin down Smyth, and then the narrow and pothole-riddled stretch of Main. On the Pretoria Bridge, I encountered a pedestrian who had decided that since the sidewalk had too many people on it, he'd rather walk in the bike lane. I rang my bell continuously, until I had to pull out into the car lane to pass him, and said, "Hey, this is a bike lane," at him as I did. It was strange adjusting to city traffic when I hit Elgin: after an hour and a half on arteries I was in a whole different headspace. (Incidentally, the burgers at Manhattans, in the food court on Slater between Kent & Lyon, are pretty damn tasty. Especially when you're wet, chilly, grimy, and have just spent an hour on a bike in the rain.)

3. A run along side streets (ah, Percy, and Bay) from my office on Gloucester to Carleton U and the CKCU studio for my radio show. Diverted traffic from the Bronson construction has really congested Bay Street at rush hour: but people seem patient enough with it. The puddles really soaked my shoes though. I love the bike lane down Bay that gets you to the Glebe, and the little deke over that takes you the rest of the way to Queen Elizabeth: but riding on Queen Elizabeth is always a little sketchy because you know the canal path is just over there but there's not many obvious ways to get to it.


4. A chilly but speedy ride along the canal path to 8 Locks' Flat, which is on the canal just by U of O. There had been some talk on Twitter about meeting up for drinks with a bunch of other #ottbike people, and that was the last place I'd heard it was going to be. Not realizing that it was a temporary patio which, um, closes when it rains, I biked there, found the place, and learned my sad lesson (and, apparently, missed the memo on where people were actually meeting. So now I'm the Snuffalupagus of the #ottbike crowd). Anyway, having packed another few miles onto the tally for the day, I turned around and rode back down the canal over to Main Street, and from there back onto Smyth and Alta Vista, and so to my apartment.

There is something about the lines painted on the road, isn't there? I catch myself doing it about as often as I catch myself being annoyed with someone else for doing it: treating those lines painted on the road like they're magic, inviolable force fields, like the line you drew down the middle of the back seat on long car trips - this is MY side and that's YOUR side, and . . . Moooooooommm!

Take the white line that marks the bike lane off from the rest of the road. I'll be rolling along, and notice a car, maybe thirty feet in front of me, with a wheel just edging over the line as it takes a curve. "Get the heck out of the bike lane," I think grumpily, before remembering that it doesn't matter to me anyway, the car's miles off and not in anyone's way. But my magic white line's been crossed; the bike lane is my safe space, it's not for cars. It's the same when there's debris in the lane or a set of potholes - it actually takes a little extra act of will to cross the line into the car lane.

It must work the other way too, since very often I'll be on a four-lane road and a car will pass me a little closer than I would like, having scootched over enough to give me clearance but apparently unable to cross into the leftmost lane, even when it's wide open. (Being a cyclist means that when I'm driving I actually do move over into that lane to give other cyclists as wide a berth as possible, because I remember the number of times I've grumbled to myself, "you had a whole other lane you could have been in, did you have to pass me so close?"

It's one of the reasons, I think, that I've found it so much more comfortable to take up more of the lane. Once a driver has moved far enough over that the tires cross that magic line, the spell is broken. In for a penny, in for a pound. Often once the line's been breached, it seems to me, drivers don't have as much of a problem moving all the way over. And so when the side of the road is really broken up, or potholed, or the drain covers are really sunken and hard to ride over, I move far enough out that they just can't get past me without crossing the line. And miraculously, cars start changing lanes to pass me instead of trying to squeeze between me and "the magic line that must never ever ever be crossed."
Posted by Kate (and Mike) at 8:48 PM No comments:

I headed to City Hall to catch Capital Vélo Fest on Saturday afternoon. It's the festival's third year, and although I couldn't make it to the Tour La Nuit in the evening (and I'm betting it was rained on rather heavily) the afternoon was fun too.

On the pavement on the way in someone had drawn a line and written "Do you know how far you should be from parked cars and the curb?" and there was also a car parked on the pavement with the door open and a sign inviting drivers to come in and test their bike-wise-ness. Citizens for Safe Cycling had a space right by the door, there was a helmet-fitting table and a ton of information for cyclists and drivers.

As expected, there were a bunch of cool bikes there, being ridden and on display: 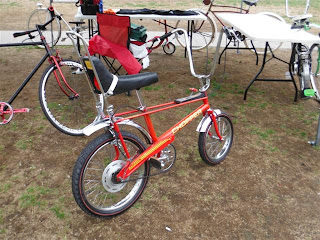 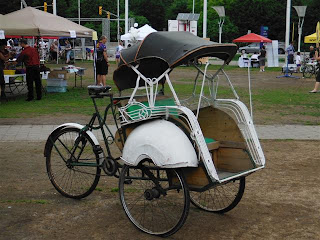 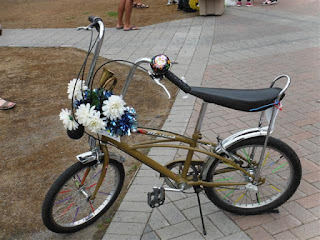 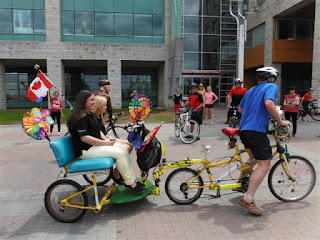 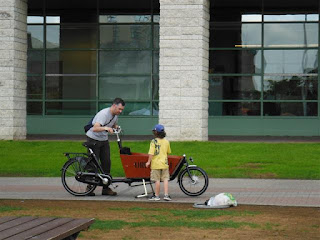 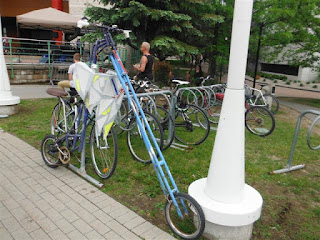 CKCU-FM was there, playing tunes, and there was a game of bike polo going on, on a temporary playing field: 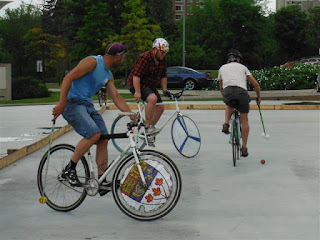 Not to mention the water-balloon fight that started up with a bunch of kids, the free bike taxis circling the plaza honking their horns, and all the stands set up by sports stores, entrepreneurs, cycling groups, and Ottawa Public Health. I roamed for a bit. At the Citizens for Safe Cycling table I stopped and grabbed a "safe cycling guide" and a copy of their newsletter, and then bumped into Hans Moor, the president, who I know from the online community only. But, seeing a tall guy walk up and hearing a Dutch accent, I said, "You must be Hans," and then added, "I'm Kathryn Hunt, I'm on Twitter and I've got a blog..." He recognized me, and since my dad had let me know that Hans had just done a presentation in Fredericton, we talked for a while about the nascent cycling community in Fredericton and the problems and possibilities there. It was nice to finally have a face to put to the name.

I checked out some of the other tables too: there was a woman named Jenny-Lynn Manzo who makes jewelry out of recycled inner tubes. 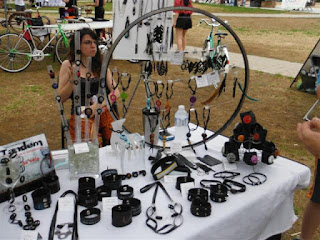 There was also a young guy with a stand, doing quick tuneups and adjustments for free: 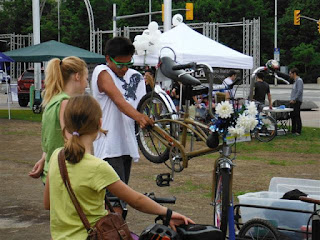 I was checking out a table surrounded by vintage and custom bikes and ran into a guy named Michael who was riding a fat bike he'd built himself out of a $200 Wal-Mart cruiser frame and a pair of absolutely enormous rims he bought/built. The tires were 3.75" in the front and 4" in the back, and super squooshy. He said you could ride over just about anything on them. . . and he let me, and a couple of other people, have a go. 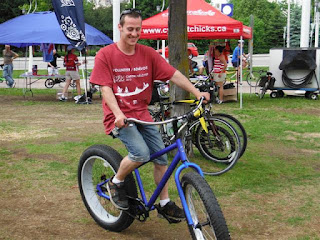 But the real surprise for me was that Governor General David Johnston was there. All set in a Canadian Army Spandex shirt and a pair of shorts, and good-naturedly taking on a couple of events in the "bike rodeo" they had set up.

He and his wife also headed to the stand where you could blend up your own smoothie (a "SMOOCH") with a bike-powered blender. 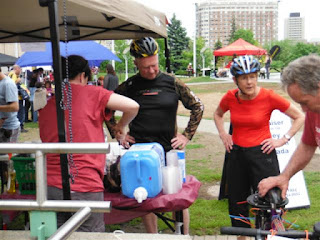 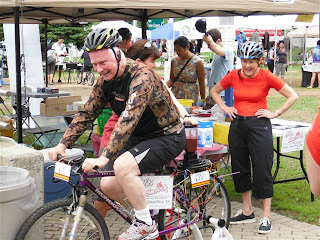 And chatted to a bunch of people afterward. 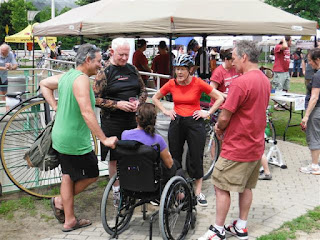 As the afternoon wore on, I bought a couple of tire valve lights - blue and purple - that I haven't had a chance to try out yet, because I couldn't be at Tour La Nuit, and found myself standing next to a guy at the table who was asking what was going on. He was up from Georgia on a business trip, saw all the bikes, and decided to check it out. When I left the table he was talking to a couple of the volunteers about the possibility of renting a bike - or checking out a Bixi - so he could come along.

I also got a free T-shirt and a random conversation with a couple of older folks - in their 70s I'd say - who publish a bike touring guide of Ontario and had some great stories about long-distance bike touring through the back roads that got me thinking, again, about taking some time out and going for some really long rides.

All in all - a great afternoon, and a really diverse bunch of people, from bike hackers and mechanics to commuters and road bikers. There was Spandex and blue jeans, young and old, clunkers and $2,000 road bikes. Definitely a "biking is for everyone" vibe. I was glad I made it out. 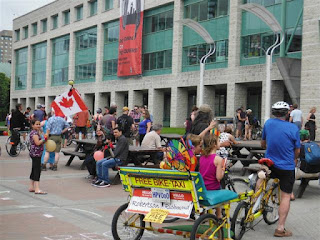