Near miss with a motorcycle

"Dear Momentum Magazine: I never thought it would happen to me . . . "

In something like ten years of riding, I don't think I've ever really had one of these. An all-out confrontation with someone else who did something incredibly dangerous. And, improbably, I actually had my GoPro running. It was a classic "YouTube bike moment."

Here's the setup: I was on my way to the office and taking my Cycle In route in order to get it on camera (I missed filming it on the actual day), which meant I had to take the construction detour from Main Street over to Echo Drive. The signed detour route takes you along Mutchmor, a wide, very quiet residential street. Detached houses with good-sized lawns, a school zone. Super quiet.

As you can see below, there's a Y intersection at the west end: bikes stay left, and in a block you're on Echo and can turn right and head for the new, lovely, bike-signal intersection to get you across Colonel By Drive and onto the Rideau Canal path.

I have never once conflicted with another vehicle on Mutchmor. I don't think I've even encountered anything but bikes.

I sort of wish I'd thought to walk up to him, because shouting across a huge intersection did nothing but disturb the neighbours. Once you're yelling, you can't talk sense to anyone. He wasn't listening anyway, he just wanted to yell at me that it was my fault. (Because he was going under the speed limit. Still working on the logic behind that one.)

If I give him the benefit of the doubt, maybe he assumed I was going right (though you can see the detour signs in the video, directing bikes left). I didn't signal: but that's because I didn't hear him coming and had no idea he was even there until suddenly he was in front of me. And did I mention it was a super quiet street?

Or maybe he pulled this dumbass move and realized a fraction of a second later how stupid it was - and that if he'd hit me he would have taken himself out too. Then, out of defensiveness and adrenaline, he decided to blame me and scream that it was all my fault. At the time, I thought maybe I had been way out in the road - but looking at the video, I wasn't really. I had just started through the intersection on the way to the left-hand street.

A friend who rides motorcycles said that an inexperienced rider can't brake quickly without spilling, so maybe that's why he cut me off rather than turning behind me. But if he was going "20 km/h under the speed limit" like he claims, I'd think even a novice would have had time to see me, slow down, and go through the intersection behind me.

I'll try and go through the video later and see if I can pull anything else to ID the guy, and I've reported the incident, but it's not like I expect the police to do anything.


@k8thek8 @seiliia Video evidence can be used as an investigative tool. There are many things that must be in place for charges to be laid.
— Ottawa Police (@OttawaPolice) September 16, 2015

Save me from the Good Samaritan left turn.

Suddenly, the driver of the Dodge slammed on the brakes. Startled, I swerved so as not to run into it, then continued my climb, filtering past it. As I got to the nose of the van, I realized the driver had stopped to let someone turn left across their path, mid-block. I hit the brakes myself, because there was a car about to turn left into me, and the driver of the car waved her hand at me in a "go ahead" gesture. So I did, while the left-turning car and the waiting Dodge held up traffic.

I get that the driver of the Dodge saw the woman waiting to turn and decided let her go ahead. And I get that I probably wasn't all that visible, behind the van, to the driver (though the van had passed me earlier, and so should have been aware of my presence), and filtering is a weird, liminal sort of space for cyclists to be in, albeit one they're in a lot. And maybe everything was going slow enough that slamming on the brakes mid-block wouldn't cause the car behind to hit the van. But come on - use your rear-view. People so often don't think about what's behind them in traffic - they react to what's in front of them.

I've seen people do the same thing in four-lane traffic: stopping to let someone turn without thinking about the traffic coming up in the left lane who won't know why you're stopped. It happens all the time further south on Bank Street, where people stop in rush hour congestion to let others turn across two lanes to get into the Farm Boy parking lot. I'll be cranking up the hill, passing the slower car traffic, and at the entrance to the parking lot I regularly see someone nosing through traffic to turn left. Often, by the time they get across to the section of the street where the cyclists are riding, they've decided "all clear" and hit the gas to get out of the street and stop holding everyone else up - and if there's suddenly a bike in the way. . .

Basically, those Good Samaritan lefts are dangerous for everyone, not just cyclists.

(I know some people will tell me that I shouldn't filter. But filtering is actually a bit of a grey area in Ontario law, and my rule is, if there's room and traffic's slow or stopped, I will filter until the last few cars before the light. If any of those cars have right turn signals on, I stop behind them. If not, I ride up right beside the first car so I'm in the driver's peripheral vision when the light turns green.)
Posted by Kathryn Hunt at 8:53 AM 8 comments:

. . . or, not so happy. Since a lot of the coverage I've seen indicates that the police blitz, intended to inform drivers about the distracted driving laws, is actually serving to inform the police just how many people are driving distracted. All the time. And how little they care about it.

And the blitz may not actually be stopping anyone. Apparently, the phone is so addictive, even getting hit with a $500 fine doesn't deter some people. In the Ottawa Citizen this morning, an officer reported that he pulled a guy over who claimed he couldn't be fined, because he'd just been fined for the same thing. Ten minutes earlier. So, apparently, the deterrent factor lasts less than ten minutes. (They didn't say whether his ass got slapped with a second fine: I sure hope so.)

What the hell is so important that it can't wait till you're stopped? 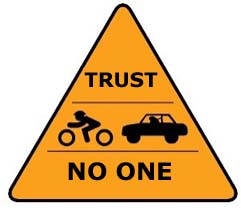