Putting the ghost bikes back

This morning, on my way to work, I saw that someone had finally done something I'd wanted to do. They'd gone and put Meg Dussault's ghost bike (at Bank and Riverside) back, in some form at least. 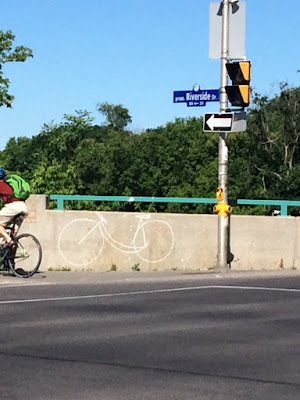 Hail to this person. When I heard the city was going to start taking down ghost bikes, I was saddened and I was angry. Particularly on the first day I rode past Meg's bike's spot and it was no longer there. It had been the best-kept ghost bike in the city: flowers replaced regularly, decorated for holidays, kept clean and spruced by her husband Paddy, who didn't put it there, but went regularly to maintain it once he discovered its existence. I saw him there one morning, sweeping around it and changing the pots of hardy mums placed under the frame. Every time I went by that intersection, on my bike or in my car, I gave it a little salute. Meg was remembered.

She was killed at that intersection by a truck on July 30, 2013. The ghost bike went up soon after, with laminated news articles and a copy of her obituary in the basket, so people would know who she was. Later, a laminated picture and a brief bio was wheat-pasted to the concrete next to the bike. It never got cluttered with faded tributes, it didn't rust or fall apart. It was clean and bright. I started to think of it almost as a silent friend. More cyclists than just me grew attached to it. My friend Ania said, "I pass there on my way to and from work...got used to seeing it there...On top of being what I think is a very lovely and appropriate memorial, I think it reminded drivers and cyclists to be mindful of that intersection."

There have only been a handful of complaints to the city about ghost bikes - seven over nearly two years, according to an access to information request filed by Ottawa Metro. But last fall the City decided to bring in a bylaw stating that "spontaneous memorials" needed to come down after 90 days, because of "public safety." It was fought over, and eventually extended to six months. And then they took them all down, a month or so ago.

At that point, Meg's bike had been there for nearly three years.

In those three years, nothing was done about the intersection. The bridge over the river is as narrow and frightening as ever, and the only concession to bikes is still the sharrows that were painted shortly before Meg was killed, which are still generally ignored. I am often crowded to the right, toward the iron girders at the side of the lane, by aggressive drivers. Heavy trucks are still frequent. The bike path still crosses Bank. Cars still turn right across the path of cyclists crossing Riverside. The signals are the same. Nothing. Has. Changed.

And now the City has decided we've remembered Meg for long enough, and ghost bikes are too depressing. They bring people down when all they want to do is have a nice drive around the city. Also, they're a visual distraction and they clutter up the sidewalk. It's a matter of public safety.

For all those reasons, when I went by this morning and I saw that chalk bike drawn on the wall, with its small pink heart on the back wheel, I was happy. And when I posted the picture on Twitter, it was retweeted and favorited 57 times in a day - way more than anything I've ever posted before.

That chalk bike isn't "erecting a monument on public property." It isn't "taking up space on the sidewalk." It would be a joke to suggest it was "a visual distraction." And it says, silently, that people loved that bike. That it was important to the people who passed it every day and gave it a little mental wave, like I did. It had become part of our community. And that we aren't just going to stand for having our reminders of the danger of car-centric design being just swept away after an appropriate six-month mourning period. That bike stood there as a silent accusation to the city, as the years went on and Paddy Dussault kept tending to it, and nothing - nothing - was done about the bridge or the intersection. And after it was cleared away, someone went and got some chalk and put it right back where it belongs. Maybe it was a family member: apparently they didn't know anything about ghost bikes until it appeared, but they certainly took it into their hearts and found comfort in it. Maybe it was just another cyclist or another member of the community who had loved the bike and missed it.

I think I'm going to get some sidewalk chalk and have it ready. I think we need to keep refreshing that ghost of a ghost. They can't tell us it's in the way. They can't tell us not to use chalk on concrete. We should do this all over the city. We should just put the ghost bikes back.
Posted by Kathryn Hunt at 8:36 PM 3 comments: