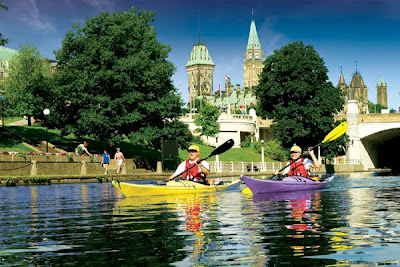 I just came across this (thanks to the Ottawa Festivals Twitter feed): The Rideau Canal Festival is this weekend, celebrating the canal as a UNESCO World Heritage Site - and a great way to get from one end of town to the other, I might add.

I love the canal. It's one of my favorite things about Ottawa. During the Spring Edition of the Writers Festival, this April, I made a point of shuttling authors from the Lord Elgin Hotel (our hotel) to the Mayfair Theatre (our venue) by way of Queen Elizabeth Drive, so they would get the really scenic route. The canal didn't let me down, with trees blossoming away and pedestrians and joggers and cyclists making the rec paths look so darn idyllic.

In the winter, the canal is the only bike path I've found that stays cleared, and it becomes my main artery from south to north, giving me a way to get around without having to worry about ice sending me sliding into the path of an oncoming car. And at night, I'll usually opt to take the canal rather than Bank Street home from the Market or Ottawa U, again to avoid cars.

The Festival is partnering with Bicycles for Humanity Ottawa this year: there will be bike parking onsite, and bikes for rent so you can tour the canal on two wheels.

Plus, if you adopt a metre of the canal, you can opt to have half your adoption fee go to support Bicycles for Humanity. Which is pretty awesome. (B4H collects unwanted bikes and ships them to communities that need them around the world.)
Posted by Kate (and Mike) at 9:57 AM No comments:

I was on my way to work this morning, enjoying the dip in temperatures from the 35+ of most of this month to a more manageable, breezy 23 or so, and went over this spot in the bike lane on Alta Vista. 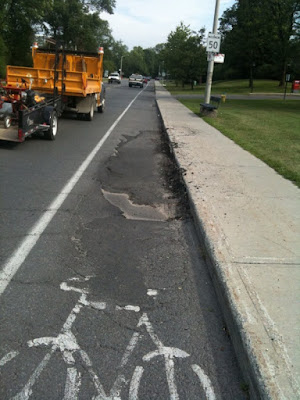 Now, I go over this spot every morning, pretty much, and most of the time I just swerve out around it and keep on going. But this morning, I happened to be going over it with a great stinking OC Transpo bus passing me, so I couldn't avoid it, and jarred my way over it.

And it occurred to me that not only is this piece of pavement egregiously bad, but it's a patch job over something that was, ostensibly, worse. I vaguely remember this stretch before the half-assed asphalt-slather happened, and I can't really say this is much of an improvement. Look at the bit where the slapped-on asphalt misses filling in the hole by a good eight inches! Look at the sloshes of black tar and grit that sort of got squooshed up against the curb! Check out the scooped ridges just before the white line! It's like this was deliberately indended to be terrible. What is this, some kind of work-to-rule thing on the part of the road crew? Did they have to leave off suddenly and never come back to finish the job? Is this the Mary Celeste of roadwork?
Posted by Kate (and Mike) at 12:48 PM 3 comments:

I have no words.

Thanks to Bike Snob NYC, I stumble across this.

I really have no idea what to say about it. Commissioned promo? Actual song? Where AutoTune goes to die? Joke? Serious? I do not know.

And yes. There's a guy in the band called "Future Shark." 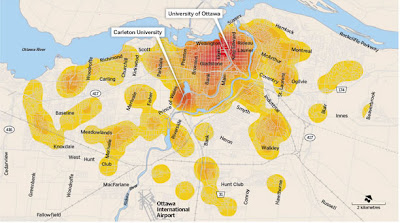 The Citizen just ran an article, with this map, on bike thefts in Ottawa. Not sure, though, how useful the map is, since it just tells you how many bikes were stolen in an area, and doesn't really take into account bike (or population) density. But the article has some specific streets named that seem to be more risky than others, which is cool: at least it gives you an idea where you might want to be packing an extra lock.

It seems only natural to me that these hot zones are also high bike-density zones. Downtown, and Carleton University. Downtown being home to all those spandex-tribe commuters in the downtown offices, whose bikes are expensive, as well as to the University of Ottawa; and Carleton University being, well, a university. In residential areas? Well, people bring their bikes inside or lock them up in sheds. My area looks pretty clean on this map... but then, there are no bike racks outside my building. I have to bring the bike into my apartment. Where I work, in Vanier? I bring the bike into the office. Where do I leave him out in the open? Downtown: outside restaurants, pubs, clubs, stores, banks, the library, at the university.

Also, it seems to me that bikes are more likely to be reported stolen if they're expensive. And there are more high-end bikes parked downtown (the spandex folks again.) In the article, the two victims interviewed both had expensive or unique bikes. It makes me quite happy that there's nothing remarkable about Mike at all: he's just a banged-up, hard-working little clunker with virtually no resale value. I am, though, increasingly uncomfortable locking him up with a cable lock. Must go find me a chain or U-lock again.

And from the comments on the article I am led to this (Ottawa-based) website: They Stole My Bike. A place to report and try to track stolen bikes, or check to see if the used bike you want to buy might have been stolen.
Posted by Kate (and Mike) at 8:10 AM 2 comments:

It's 32 or 33 degrees out there, and feels like 42 or 43 because of the more than 90% humidity (that's about 107 Fahrenheit for anyone not working in metric.) And for some reason it seems to me that heat like this makes people stupid. Yesterday, I was driving, and had to swing out to avoid a cyclist coming down the wrong side of the street toward me. Of course, I also spotted a matched set of bike cops, black uniform shorts and matching bikes and all, heading across the grass from the sidewalk to wait at the edge of the road, then (illegally) cross Saint Patrick, nowhere near a crossing or intersection or light, up and over the grass median, and then across the other side, forcing traffic to stop for them while they got onto the sidewalk on the far side.

Ah, hypocrisy. But let that be.

When it's this hot out, though, and I'm slogging up a hill (and I really do need to get my gears fixed) and a driver skims too close to me, or pulls out of his driveway into the road without looking for me, or cuts me off on a right turn, or has somehow gotten her front tires actually onto the sidewalk at the edge of the road, blocking my way, for no discernible reason, or whatever else, I just wish I actually had the stickers referenced in this little excerpt from Neal Stephenson's Snow Crash. Oh, and the balls that the Kourier (her name is Y.T. and she's a protagonist) has in the first place...

Someone is shadowing him. Right off his left flank. A person on a skateboard, rolling down the highway right behind him, just as he is laying in his approach vectors to Heritage Boulevard.

The Deliverator, in his distracted state, has allowed himself to get pooned. As in harpooned. It is a big round padded electromagnet on the end of an arachnofiber cable. It has just thunked onto the back of the Deliverator's car, and stuck. Ten feet behind him, the owner of this cursed device is surfing, taking him for a ride, skateboarding along like a water skier behind a boat.

In the rearview, flashes of orange and blue. The parasite is not just a punk out having a good time. It is a businessman making money. The orange and blue coverall, bulging all over with sintered armorgel padding, is the uniform of a Kourier. A Kourier from RadiKS, Radikal Kourier Systems. Like a bicycle messenger, but a hundred times more irritating because they don't pedal under their own power -- they just latch on and slow you down.

Naturally. The Deliverator was in a hurry, flashing his lights, squealing his contact patches. The fastest thing on the road. Naturally, the Kourier would choose him to latch onto.

No need to get rattled. ... He passes a slower car in the middle lane, then cuts right in front of him. The Kourier will have to unpoon or else be slammed sideways into the slower vehicle.

Done. The Kourier isn't ten feet behind him anymore -- he is right there, peering in the rear window. Anticipating the maneuver, the Kourier reeled in his cord, which is attached to a handle with a power reel in it, and is now right on top of the pizza mobile, the front wheel of his skateboard actually underneath the Deliverator's rear bumper.

An orange-and-blue-gloved hand reaches forward, a transparent sheet of plastic draped over it, and slaps his driver's side window. The Deliverator has just been stickered. The sticker is a foot across and reads, in big orange block letters, printed backward so that he can read it from the inside.

He almost misses the turnoff for The Mews at Windsor Heights. He has to jam the brakes, let traffic clear, cut across the curb lane to enter the Burbclave. The border post is well lighted, the customs agents ready to frisk all comers -- cavity-search them if they are the wrong kind of people -- but the gate flies open as if by magic as the security system senses that this is a CosaNostra Pizza vehicle, just making a delivery, sir. And as he goes through, the Kourier -- that tick on his ass -- waves to the border police! What a prick! Like he comes in here all the time!

He probably does come in here all the time. Picking up important shit for important TMAWH people, delivering it to other FOQNEs, Franchise-Organized Quasi-National Entities, getting it through customs. That's what Kouriers do. Still.

He's going too slow, lost all his momentum, his timing is off. Where's the Kourier? Ah, reeled out some line, is following behind again. The Deliverator knows that this jerk is in for a big surprise. Can he stay on his fucking skateboard while he's being hauled over the flattened remains of some kid's plastic tricycle at a hundred kilometers? We're going to find out.

The Kourier leans back -- the Deliverator can't help watching in the rearview -- leans back like a water skier, pushes off against his board, and swings around beside him, now traveling abreast with him up Heritage Boulevard and slap another sticker goes up, this one on the windshield! It says

The Deliverator has heard of these stickers. It takes hours to get them off. Have to take the car into a detailing place, pay trillions of dollars. The Deliverator has two things on his agenda now: He is going to shake this street scum, whatever it takes, and deliver the fucking pizza all in the space of ... the next five minutes and thirty-seven seconds.


What can I say? It beats the other dream-weapon my brother once suggested: a quick-release, handlebar-mounted ballpeen hammer. Because in the interest of not perpetuating the cycle of violence, I don't actually advocate damaging the cars of sloppy drivers.