Little things happen every day. Little things that remind you that to many drivers, a person on a bike is not to be taken seriously. Not really part of road traffic. Peripheral, like fire hydrants and sandwich boards

Take this afternoon, when I was on my way to the mall for garam masala and toilet paper. I take Kilborn now, if I can help it, rather than Heron: it's an eastbound route to Bank Street that cuts out most of the hair-raising crap near my apartment. But Kilborn, where it crosses Alta Vista, is really pretty narrow. 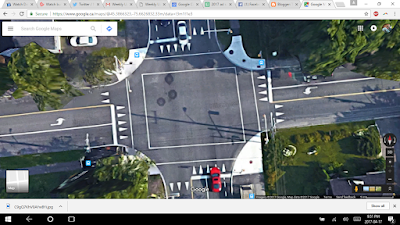 This is a signalized intersection without advance lefts. You've got a through lane and a turn lane heading each direction, and the turn lanes are super narrow. In fact, so are the through lanes: definitely not wide enough to let a car pass a bike with a metre of space.

Partly because I started riding this route in the winter when the snowbanks covered half the through lanes, and partly because it is so narrow, and partly because on the west side of this intersection the pavement is severely potholed and broken, so that I need to be in the middle of the lane anyway . . . for all those reasons, I habitually take the lane before I reach this intersection when I'm westbound. There's a red light, usually. And Alta Vista being a major corridor, people often want to turn right onto it.

And today, as I was waiting for the light, I became aware of something large moving up beside me, and looked over to see a big black Volvo SUV pulling into the left-turn lane, then up to the intersection, and making the right turn around me as I gestured in exasperation, and shouted, "Hello, that's illegal, what the fuck, buddy!"

No, it wasn't particularly dangerous. I was stopped. The driver was moving fairly slowly. But it was . . . insulting. Demeaning. And frustratingly typical, If that driver had been stuck behind a car waiting for the green light, he would have waited: without even giving it a second thought. It wouldn't have occurred to him to try to queue-jump around a car. But a cyclist? I was supposed to be over at the side of the road. In the gutter, where cyclists are supposed to be. Out of the way. And if I wasn't going to "share the road" (in driverthink, that means "be somewhere not here") then he couldn't be expected just to wait behind me: I'm not a legitimate vehicle. It wasn't even like he was mad at me for taking the lane: I'm willing to bet he honestly didn't see that that was what I was doing. A cyclist taking the lane, in this driver's mind, was just a cyclist who was further from the curb than she should be, but still essentially at the side of the road where cyclists go, and so there was no reason not to make the right turn.

And sometimes I get really sick of not being a "real" road user. Of the constant reminders that I don't get the respect that would be given someone in a car. Not out of open hostility. Just the way things are.

A month or two ago, an elderly man yelled "You're not a car," out his window at me after waiting at the light, in the same spot, for me to go straight and him to turn right. And it wasn't even anger: what I heard in his voice was the sort of resigned irritation that told me he actually knew I had the right to wait in the middle of the lane, but didn't feel I should have it. That someone had told him he was supposed to treat cyclists like cars, and he resented it, because he didn't think he should have to, and the dadgum government was being stupid, catering to us pompous bike riders who think we should get special rights over (read: have the same rights as) real, job-having, tax-paying folks in cars. (I know, it's a lot to get out of the tone of voice of a crotchety man in the rain, but it's the impression I got.)

I get tired of it. But it doesn't mean I'm going to stop taking the lane when I need to. Grumpy Man and Queue-Jumping Volvo Guy can just deal with it.
Posted by Kathryn Hunt at 8:11 PM No comments:

Join me, as I liveblog the City's online consultation about this project. . . The Heron Eastbound Cycle Track from Colbert Crescent Multi-Use Pathway to Jefferson Street!

First things first. . . eastbound only? Hm.
Next - Colbert Crescent what? To where? Let me figure out where that is. Oh wait, there's a map. . . 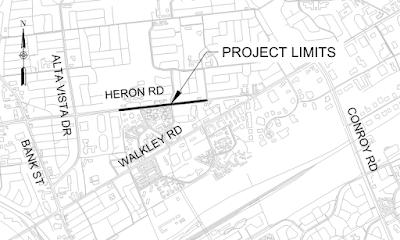 It doesn't even connect up with Alta Vista, which has a bike lane already and would be a natural connection point. Oh, and which has a metric ass-ton of schools on it, the students at which would probably love to have some extra bike connectivity.

Okay, on with the consultation.

We get a description of Heron. . . "a four lane divided urban arterial road with a posted speed of 50 km/h." This is my eyebrow going up. Speeds on Heron are generally closer to 70 km/h.

"There are currently no cycling facilities on Heron Road within the project limits. Cyclists must either ride on the road mixed with motor traffic or dismount and walk their bikes on the si ---"

Sorry. That's where I started laughing. I know, they have to say what cyclists are required to do by law, but no one has ever dismounted to take the sidewalk in the history of ever unless something was wrong with their bike.

The Heron-Baseline network spine is being developed into Cross-town Bikeway #7 in stages. In the near term, this proposed cycle track segment will provide a means for residents of the local communities such as Heron Gate and Guildwood Estates to more safely cycle eastbound to the area’s retail destination at Herongate Square.  It will also help those making longer journeys by bicycle through the corridor.  For example, via Jefferson Street and Featherstone Drive, it will be possible for cyclists to access the extensive pathway system in the Alta Vista Transportation Corridor.

Okay, leaving aside the "in stages" part, which I'm not crazy about, because linking disparate bits of different infrastructure without an overarching plan is a pain. . . this will allow people from Heron Gate and Guildwood to get to the mall. But not home from the mall. Those that use it will probably salmon, and use it in both directions. Also, if people from Heron Gate want to get to the mall, they don't cycle, they walk, because it's half a kilometre, and they don't take Heron Road at all. They take side streets or the pathway through Sandalwood Park that I've been on about. (They might bike from further out in Guildwood though. But there are plenty of side streets to use for that.) 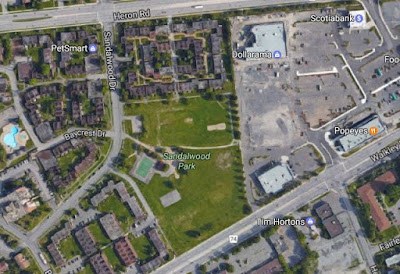 In fact, thinking about it, this track is short enough that if you wanted to get to Featherstone from Heron Gate, you'd probably be more likely to cross Heron at Briar Hill and go into the subdivision there. Once you've learned which streets carry you through to which others, it's a far nicer way to connect up with the "Alta Vista Transportation Corridor." It's what I do now to avoid riding on Heron on my way to work, or to the rock gym on Saint-Laurent.

But hey. You can't always get a massive build. And the existence of one piece of infrastructure is a foot in the door to make more, right? Maybe even encouragement, since people will not be thrilled about being taken out of 70 km/h traffic for three blocks just to be dumped back into traffic on the other side. They'll want this 850-m stretch of cycle track to actually connect to something at some point.

But here the devil's advocate in the back of my head says that if it's too short to actually be useful, it won't draw bike traffic, and that could be justification for not building more infra. . . . sigh.

Anyway, from the initial description, it sounds like they're building what I envisioned as possible back when we were planning to paint the paved kill strips green last summer as a pop-up project: a raised cycle track along the existing paved kill strip. Eventually it will be separated from the sidewalks by a grass boulevard, but for now it sounds like the cycle track will be at sidewalk height and adjacent. That doesn't work so well for the stretch of Laurier that passes City Hall: I have to shout "heads up!", brake, and weave frequently because people stand in the cycle track waiting for the walk signal or walk along it.

"Pavement markings and signage will require cyclists to yield to pedestrians at the bus stops". . . well, I suppose it's better than having two or three zones within the 850 metres of the project where they expect cyclists to dismount, but why can't the cycle track run behind the bus stop, instead of between the stop and the street?

Okay, Q&A time in our consultation.

Why eastbound only, you ask? . . . the westbound track will be included in future road work on the north side of the street because that way they can fold in the cost and effort of moving the hydro poles that are currently in the middle of the kill strip.

The other questions, of course, are "how will motorists be impacted during construction?" and "how will motorists be impacted once construction is complete?" To which all I really have to say is, if you complain about anything that might lower traffic speeds on Heron Road, you are a sociopath. Still, the construction will probably cause minimal problems to drivers. I imagine that if there are any objections to this from the drivists, it'll be someone yanging about taking out the bus bays and causing buses to stop in the lane. It always is.

And now, to look at the plan!

There are regularly spaced "yield to cyclists" signs at driveways and intersections. The cyclists continue straight across at intersections, no "Dutch-style" bulb-ins, but that's fine, the intersecting streets aren't really that busy for the most part, they're residential, and sight lines are fine. Probably the busiest intersection will be Baycrest Drive.

But then there's this: 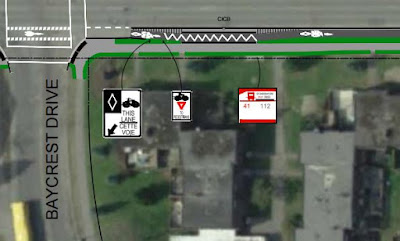 There is no bus shelter at this spot. In fact, I think there are no bus shelters the length of the project. This would be the perfect time to add some. Maybe some benches so people can sit while they wait for the 112. And while you're adding a bus shelter so folks don't have to stand in a howling gale waiting for buses, you could put the cycle track behind it, as they've done at Bayview, to create a "floating bus stop," instead of requiring cyclists to cut between the bus and the waiting area. Something like this: 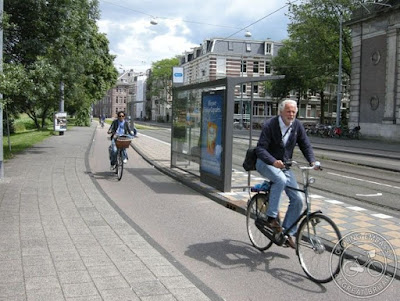 Anyway, on down the street we go in our PDF rendering. . .

It's really a pretty simple design. There aren't many cross streets, and they're not reconstructing much. It's essentially just a repaving treatment at the edge of the road. Would that it could always be so easy to do.

And then, outside the bank at Jefferson, lo, like a flower it withers; it flees like a shadow and does not remain. It drops into a dedicated right turn lane into the Heron Square parking lot, no less. If you want to continue along Heron, you're crossing right-turning traffic. No "yield to bikes" signs are apparent. A dashed bike lane marking, channeling cycle traffic through this intersection, would not go amiss here, I think.

Now, off to fill out the feedback questionnaire and tell them all my thinks! You can too, if you haven't. It's open till the 21st of April.
Posted by Kathryn Hunt at 2:58 PM No comments: