I've been pretty silent here for a while now - I blame a heavy workload, but I hate going on about how long I've been away, so I won't.

Today I went to the Danielle Naçu Community Ride: it was one year ago today that she was struck by a car door, knocked into traffic, and killed on Queen Street. I couldn't ride: I sprained my ankle badly last weekend and I'm not quite up to riding, but I walked, and took pictures (I was also covering the ride for the Centretown BUZZ). 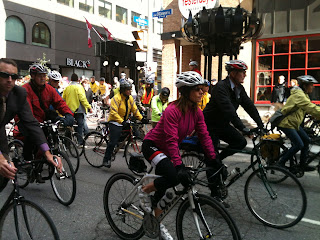 I wasn't sure how many people would be there: but there was an encouraging number. The ride started off from Sparks and O'Connor, and headed along Queen to behind the NAC, with a stop at the ghost bike (which has been redecorated: it's still considered a temporary monument, and a more permanent memorial, for Danielle and other cyclists, is planned for sometime next year.) 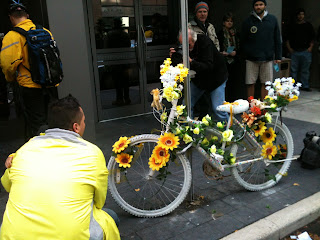 The ride ended at City Hall, where the cyclists all wheeled their bikes inside and gathered for speeches - a friend and colleague of Danielle's hosted, and there were speeches by the mayor, three survivors of the Kanata 5 crash (poignantly, one still uses a walker and is clearly impaired, three years later), and Danielle's mother. The Kanata survivors got a standing ovation from the crowd. 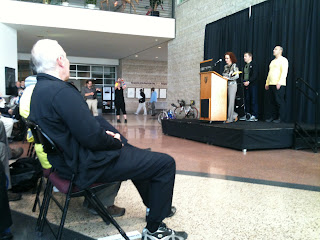 A lot has been done since Danielle was killed: perhaps it's that her story resonates with people - she was young, talented, clearly a passionate activist and a person who volunteered her time for social causes and environmentalism, and she was also a young public servant working downtown, like so many in Ottawa. And perhaps it's because the people around her have been so determined to bring positive change out of her death. There is a scholarship at the University of Ottawa in her name; Scotiabank has instituted a memorial fund dedicated to helping people who give back to their community; and the City has teamed up with Safer Roads Ottawa to make steps toward public education and awareness, as well as infrastructural changes like the bike box on Wellington and increased bike lanes and bike paths, in an effort to make Ottawa, as Mayor Watson said, "the safest city for cyclists and pedestrians in the country." An initiative was announced at the memorial - the city has printed leaflets about watching for cyclists, which include a transparent sticker that reads "Watch for Bikes" that can be placed on the rearview mirror, to remind drivers to look before opening their doors.

This is actually a safe town for cyclists: I talked last week with a friend who grew up in Windsor, where drivers would yell and throw things at cyclists for daring to be in the road (in Car City) and where there is virtually no infrastructure for them. Things can always be better, but Ottawa's doing pretty well, and reminders like Danielle's memorial ride just keep that impetus going. I hope it's a success next year!
Posted by Kate (and Mike) at 7:03 PM 1 comment: