Parking it in the 529 Garage

A couple of Sundays this month now, I've spent the morning down at the Sunday Bikedays on the Sir John A Macdonald Parkway, where they close the parkway to cars all morning so that people can take their bikes, skateboards, rollerblades, or feet on it. Me, though, I was there to help people register their bikes with 529 Garage. 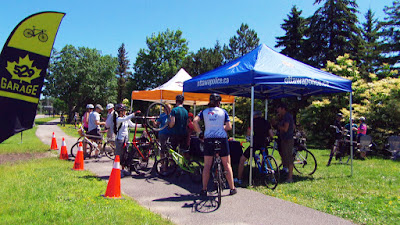 This is a joint project between Bike Ottawa, the Ottawa Police Service, and the Ottawa Safety Council. 529 Garage itself is a non-profit that started about six years ago and is now, apparently, the biggest bike registry in the world. It launched in Ottawa in mid-May.

I first found out about this organization when Bruce Fanjoy brought it up at a Bike Ottawa board meeting (to ask if we thought we wanted to be a partner), and was blown away. You always want to look for the catch, or at least I do, but there doesn't seem to be one at all. Registry is free: Project 529 pays for itself by selling "shields" - little tamper-proof decals you can put on your bike to mark it as registered - and with subscriptions to the database paid for by cities, police services, and organizations like Bike Ottawa. The bike owner doesn't enter any personal information, nothing requiring security: an email is all, and a photo of you with the bike (if you want to include it, though, really, you should). No data mining.

You can go online to their website, or download the 529 Garage app on your phone, create an account, and register a bike in five minutes. (I was averaging between five and six minutes per bike this morning, logging people in through the Ottawa Police Service account with a tablet at our tent near Deschenes Rapids on the Ottawa River.)

You'll want to include photos of your bike, its registration number (usually found under the bottom bracket, right underneath your pedals), any identifying details (like that sticker from a charity ride you did, or the custom basket, or unique handlebar tape, or a dent in the back fork from that time you tried to jump a culvert and failed) and the shield number if you've got a shield. Add a picture of you with the bike so people know what the owner looks like, and all that info goes into the database. You can add as many bikes to your garage as you want.

Then, if your bike gets stolen, you hit the alert button and the notification goes out to anyone who has the app in a 15 km radius, letting them know to have an eye out for the bike. If you think you see a bike that's been flagged as stolen, you can take a picture and send it in, with information about where it was. And the police have access to the database, so if the bike is recovered, they can search the system with the serial number and description, and email the owner of the bike. I have been calling it "Neighbourhood Watch for bikes."

In some cities, they've recorded staggering results. Vancouver logged a reduction in bike theft that was 30-50% depending on the part of town.

The uptake has been wild. People have heard about it, through word of mouth or social media or via the news, and they are keen to register (and to get the shields, which the Ottawa Police Service are giving away with registration for a limited time. If you want, though, you can buy one for around ten bucks at some bike shops. Also, if you're in the system, you can stop off at a couple of police stations and get a free sticker - for now. Supplies are limited).

The two Sundays I volunteered, I was there around 8:30 am, and the parkway closure goes from 9:00 am to 1:00 pm. We would be flat out, three or four volunteers deep, signing people up at maybe ten minutes a person, and not have time to sit down for the whole four hours. Today, in 30-something humidex, we at least had a cooler of ice water to keep loading our own bottles from and Bruce brought chocolate chip cookies in a cooler full of ice. A steady stream of people came by, lined up, got registered, and pedaled off for four straight hours. We're well over 2500 bikes registered locally since May and managing over 100 registrations per event.

For me, it's been fun to see all the different bikes that people bring by to register, from carbon road bikes (the registration number is always easy to find on those, they're always just so clean) to forty-year-old steel frame commuters, to one lovely royal blue full-sized trike, to ebikes, to tandem bikes and trailabikes with kids on the back seats. I got to register a brand new, shining Electra Townie this morning (cream, with teal rims): the woman who'd bought it two days earlier was glowing with pride and delighted to be able to add that layer of protection.

The more people are signed on the better it works: so if you're not signed up, really, what are you waiting for?