Making your own path

A while back, I participated in a transportation audit of my neighbourhood, along with some people from ACORN and the Healthy Transportation Coalition. We walked around the streets and noted things that needed fixing to make it easier to get around by bike, on foot, or with public transit. Things like cracked pavement, unsafe intersections, areas with bad lighting, places where there should be bike paths.

This spring, I got together with a bunch of people over at the mosque around the corner from my place to form a working group, organized by the Healthy Transportation Coalition. We talked things over and eventually ended up voting to tackle a couple of key spots.

One of those spots: Sandalwood Park. It's right behind my apartment building in the densely packed Herongate complex. Somewhere around 5,000 people live in Herongate, and they all cut through Sandalwood Park to get to the grocery store, drug store, and mall that is rapidly being rebuilt on the other side. (Long story: the old Herongate Mall was torn down a couple of years ago because it was falling apart. Now there is a series of retail clusters going in, including a drug store, a couple of fast food outlets, a Petsmart, and the FoodBasics grocery store.)

The complex has a lot of extended families living in it: households with parents, young children and grandparents. Maybe partly because it's a low-income neighbourhood, there are also a lot of people with baby strollers, canes, walkers, and wheelchairs.

It is universally agreed that this path is a nightmare in the winter. It's paved with stone dust, and it turns into a pitted, slurry-coated mess when it rains. In the winter, it's not cleared, so people have to pick their way through the snow, eventually creating an uneven, tamped-down ice road that glasses over every time the temperature drops, making it treacherous even for me, a generally able-bodied and physically fit person.

Add to that, it's not lit at night. Neither is the basketball court, or the soccer pitch, even though evenings are the most vibrant times in this neighbourhood. Everyone, it seems, comes outside on cool summer evenings. The kids play soccer and basketball and play on the play structure, and the parents bring out thermoses of tea and sit on the grass to talk.

So, we figured we could organize a sort of pop-up action to point these problems out, and show the city (and the neighbourhood) what was possible.

Over a couple of months, we talked to the local city councillor, Jean Cloutier, and tried to get some sense of what we might be allowed to do. I went with Trevor Hathaway from the HTC to meet Cloutier in his office, and he seemed keen. (He seemed less keen as time went on.)

We had also had some notion of trying to turn the paved kill strips on either side of Heron Road into temporary cycle tracks, but that proved to be a step too far for the City engineers, who couldn't sign off on it for "safety reasons."

Anyway, we at least got the go ahead to do a temporary "paving" of the pathway, and to string up lights in the park, on August 20, the same day as a "FunFest" being put on by Timbercreek, the property management company that runs Herongate.

So, last Saturday, I met up with Trevor at the park to - ahem - forge our own path.

He'd been to Canadian Tire (the Bank and Heron location), who gave us a discount on all the materials (shout out), and had a van full of 50 industrial rubber mats, 30 solar lawn lights, a ton of bike lights and clip-on lights, three strings of LED Christmas lights, and a solar-powered security light.

Job one: get the mats laid out and create a "paved" path. We dropped them off ten at a time along the path, then laid them all out end to end, overlapping slightly, and started working on taping them to each other. (The tape was a City requirement. We couldn't create a "tripping hazard.") 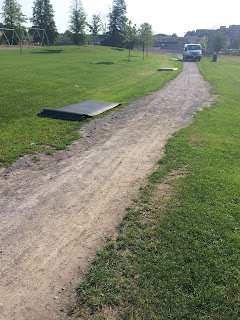 Once we had them all laid out, we could start trying to tape them down. The tape was actually a bit of a battle: turns out even duct tape doesn't really want to adhere to industrial foam mats. But we were undeterred! 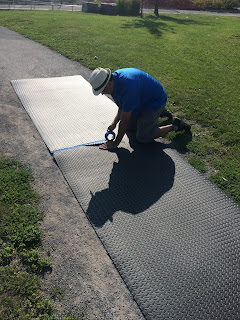 Eventually we resorted to stamping down all the tape with our feet to try and get it to stick. Mostly, it did. Mostly. 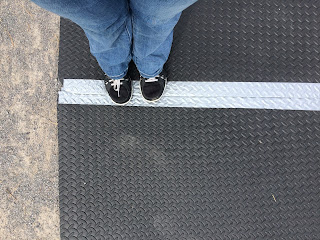 Anyway, when we finally had all the mats down, and had gone through more than 120 yards of duct tape, we had something that looked amazingly - almost surreally - like a paved path. It was kind of beautiful. 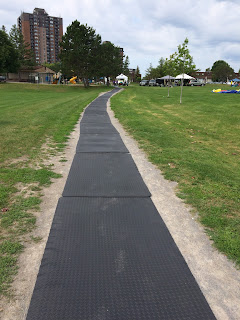 With the path set up, we set to work talking to people about it. There were crowds starting to gather for the festival, so I went out walking through the crowd talking to people and seeing if they wanted to fill in a short survey, basically just expressing support for the path being paved.


I was amazed at the response. I once worked for a telemarketing company. I remember how hard it was to get people to answer a survey. This? Not hard. I would say, "Have you got a couple of minutes to answer a couple of questions about this pathway? We're trying to get it paved and cleared in the winter and lit at night," and people jumped at the chance. I had all of one refusal, and that was because he said he never used the park. Everyone else said, more or less, "hand me the clipboard, where do I sign?" From a bunch of lanky teenage boys who said, "You want to light the basketball court? Aw yeah!" to the graphic designer walking with a cane who said, "Oh, thank you for doing this, you're my new best friend, where do I sign up to know more about this?" 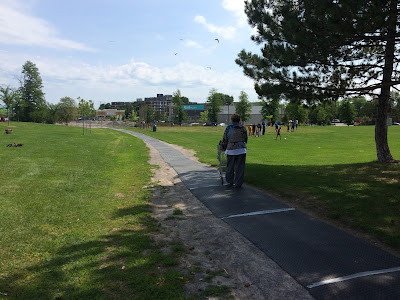 I think the telling bit was when Councillor Cloutier showed up. Someone came to get me to be in a group photo on the "pavement" with him. There was a photographer from the Ottawa South News there. As we were figuring out where to stand, she jokingly said to Cloutier, "But you know, if you're in this photo, you have to pave the path."

He walked away. Just turned and walked away. The reporter even chased after him: he'd spotted the Gloucester-Southgate Green Party candidate and was walking with him toward the barbecue. She asked if he wanted to come back for the photo. "Not that photo," he said. And kept walking.

(The Ottawa South News article about the event gives you a pretty discouraging sense of his attitude toward the project.)

But we walked around getting signatures. By the end of the festival, we had 110 completed surveys and had run out of copies in English.

As the festival started to wrap up and the wind picked up, bits of the "path" started lifting in the wind and blowing away.

Finally we stopped trying to just clean up the bits that were actively flying off, and picked up all the mats, loading them back into the van. But it was time now to start setting up the lights! 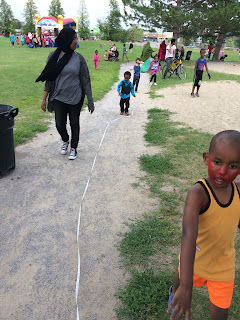 We had a 100-foot measuring tape, and the HTC's summer student, Mariema, helped me spool it out to mark off 20-foot intervals and make preliminary holes for all the ground lights. The thing we hadn't counted on was the large numbers of children in the park who would think the idea of a 100-foot measuring tape was great fun. One little dude, about two years old, I think, got hold of the end of the tape as I was reeling it in, and wound up being pulled in like a fish. He was pretty darn cute, but I kind of figured we might be in for some trouble.
Yeah. Eventually a whole crowd of kids had clued in to the existence of 100 feet of measuring tape, spooled out. It got to be kind of chaotic. 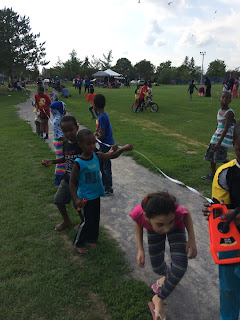 Eventually, though, we got the path measured out and the holes started, all ready for the solar lights. 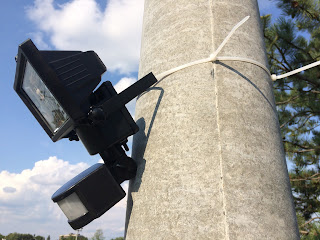 The last thing I did before I had to head out for the evening was to clamber up our 20-foot ladder to attach a solar powered security light to a light standard, using the high-tech method known as "zip ties."  We couldn't also put up the solar panel that charged it, but then it was only going to stay up until 10:00 pm, after which the City - who apparently have a problem with lights in parks - said we had to take it all back down.
And then I headed out. Trevor and another volunteer stayed on to set up the path lights. 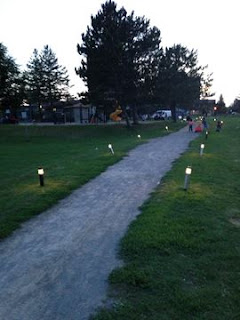 I came away from the day with a sunburn, a sense of discouragement about City Hall's support for this, and a sense of encouragement about my neighbours and their support. I got to meet a lot more of my neighbours than I had before, the "paved" path looked awesome, and the lights were beautiful. And I got to help improvise a bunch of solutions on the fly as the day went on, which is always satisfying.

Will our councillor do anything about this path? It doesn't seem likely. But on the survey we handed out, the last question asked what actions you were likely to take in the next year to fix an infrastructure problem in your neighbourhood. One of the teenaged bike-riding boys I got a survey from had answered, "I'd do something about it on my own with my friends."
Posted by Kathryn Hunt at 10:06 PM 7 comments: