I am pretty glad I got my butt out of the house Sunday morning for the 4th Annual Winter Bike Parade. On Saturday it was hovering a little below freezing and, frankly, it was gross. Sloppy, gritty, scary, generally unpleasant. Today, when I suited up to get to City Hall, the radio was telling me it was -17C, with a windchill taking it to about -24.

Bring it. The ride downtown was far better than anything I did yesterday. And I made it *just* in time to fall in with the line of about 50 (?) bikes heading out for a low-speed, low-stress, fun cruise around the streets of downtown Ottawa.

My iPhone cacked out on me on the ride there: too cold. Its little electronic brain couldn't hack it and it shut off. From talking to a few other people, I guess that was happening all over. Some people were tucking their phones into inside pockets or stashing them in armpits to keep them from caving to the cold. A few others were running hardy GoPros (mine had no battery power, alas). So, I don't have any photos of the ride, but it was fun.

And of course, other folks had cameras.


We pedaled along through the chilly streets. I found myself riding near a couple of people I knew from Twitter, though I didn't know it at the time: @MrOneWheelDrive was chauffeuring @solemom in a great homemade trailer, and we chatted as we rode along. And I got into a couple of Sarah's pictures, along the way:

And then we were back at City Hall to lock up our bikes to every available post and rack, and head up to the Councillors' Lounge for coffee and sandwiches and cookies and a panel with urban city councillors Jeff Leiper, Mathieu Fleury, Catherine McKenney and Tobi Nussbaum. Those four are about the furthest thing from hostile elements at City Hall, and they all had really good, concrete information about what projects are in the pipe, realistic timeframes for certain types of change, examples of solid work they're getting done, and, probably most importantly, advice on how best to get the bike voice heard. Right down to the nitty gritty of "make noise on Twitter, by all means, but email is how you contact your councillor."

(The Twitter community for cycling is great in Ottawa, and I think in part a lot of people make noise about frustrations on Twitter because they'll also get a couple of supportive comments from other cyclists. When I have a scary encounter with a bus or a terrible bit of infrastructure, and I tweet about it, chances are good I'll get reassurance from someone out there in the #ottbike cloud - just a basic "glad you're okay, that sucks, hang in there, we all know what it's like." And sometimes that "you are not alone" feeling is more important, in the moment, than letting anyone in authority know what just happened. But Jeff Leiper did make the point that he doesn't get around to Twitter as fast as he does his email, and if we really want a concern to get his attention, that's the route to take.)

For added entertainment, later that afternoon there was the chance to watch Kevin O'Donnell and "Ottawa_Driver" trolling the comments section on the Ottawa Sun's article on the event. Break out the bike comments bingo cards, folks!

Posted by Kathryn Hunt at 9:08 PM No comments:

Viking Biking and the front page

So. . . I'm writing a freelance column on transportation now, for Metro Ottawa. Here's the first one: complete with a snowy picture of me and Mike on Laurier Avenue. (Sans hat, gloves, or helmet: verisimilitude fail. I admit to leaving my hat, helmet, gloves and backpack back at the Metro office when we ducked out for the photo op.)

In other winter riding news: Citizens for Safe Cycling's Winter Parade is coming up on the 25th! Bog willing, I'll be there... maybe even getting some photos and sound bites for the February BUZZ. And hopefully not getting the prize for "the bike in the worst state of repair (but still safe and rideable)." (Poor long-suffering Mike.)

And having spent the last couple of days complaining about the ice at the edge of the roads, I have to share this link: a description of one Dutch city's bike- and pedestrian-centric snow clearing model. What they do, how they do it, what equipment gets mobilized, what their time frame is. Got to say, it made me jealous.

Especially reading it yesterday, after sliding around (on foot) on the sidewalks in front of my office and hitting a horrific, lane-wide stretch of snow and ice (on Bank Street in Old Ottawa South near the big antique store: beware) which caused rather a lot of comedy as I backed up traffic in my lane, inadvertently, because I had to slam on the brakes, then couldn't figure out how to get off the ice island safely with traffic still flowing in the inside lane. People kindly stopped behind me and flicked their headlights to say "go ahead" but I couldn't because to go ahead I'd have to cross all the lumpy snow and ice and get into a lane that hadn't stopped moving .... The whole thing was a little slapstick and a little embarrassing.

Anyway, this town in the Netherlands seems to have it down. I know Ottawa has more snow, but still, a girl can dream. . .

My kingdom for clean pavement

I was a bit of a mess when I made it to my friend's house on Saturday night.

I had left the Centretown BUZZ office as soon as humanly possible (about an hour later than I'd intended to). Several deadlines breathing down my neck, and I guess I wasn't in a great mood when I left, because I knew I was running later than I'd planned.

This was my verdict on the ride home.


Aside from the cold wind in my face, and the usual distrust of people coming in through intersections, and the disturbingly large number of people who made high-speed, stupid maneuvers past me on the south end of Bank, it was the ice.

It had snowed, then rained ice, then frozen hard, then snowed again. This isn't all that unusual in Ottawa. In fact, I saw someone recently propose "freezing drizzle" as the official precipitation of Ottawa, and I was in full agreement (although I might also argue that the official precipitation should be "snow, followed by rain, followed by more snow, then two days of freezing rain, causing an unbreakable layer of rock-hard ice on anything solid").

What this meant was that the snow, cleared away from the cars' tracks by traffic, then scraped down to a centimetre-thick layer by the snowplows, had then been rained on and hardened into a solid layer of ice, about a centimetre thick, extending across the outer foot to foot-and-a-half of the street. Where bikes travel.

And I know: I know I should take the lane anyway. But though the spirit is willing . . . sometimes the flesh is scared of riding as far out as I should. Because cars are still trying, at the Lansdowne Bridge, to pass you two abreast. So I would find myself with my tires on the outer side of that strip of ice, really close to the curb, and then the bare pavement would run out and I'd have to try to cross the ice - remember, it's a good half inch thick at least - back to the clear pavement. And out into the lane.

In Old Ottawa South, the ice layer actually claims one whole lane out of two for about a block, going by Trinity Church, because that lane is parked up during the day and so ice builds up. (So, if you're driving down Bank Street wondering why that cyclist is in the middle of the inside lane, that's why.)

Gah. Between that, and drivers not compensating for the crap road quality by giving me enough clearance, and a cold wind making visibility just a little worse, what with the blinking and the tearing up, it was a rough ride. (I don't suppose I can blame the drivers: they probably don't know about and haven't noticed the ice and sludge at the side of the road.)

But it was better the next day, when it was a little warmer and the traffic was a little less heavy and I was under less pressure, and I really enjoyed my ride home that night, and now it's -2 and I know that the ice is melting, slowly, and I'll probably enjoy the ride to the office this afternoon.

Mostly, I like riding in the winter. But that confluence of conditions, making the edge of the road so terrible, is pretty common in this town. I don't know how it could be helped: ensuring the plows go right to the curb instead of leaving a foot and a half of snow? Salting the edges of the road? On official bike routes (South Bank Street was one, last time I checked, and it does have sharrows and actual bike lanes in spots), running one of those little sidewalk plows along the bike space, late at night when it's safer to do that? There are probably things that could be done to clear a little more space for us bikes. Question is, how much would that cost and would the City think it's worth it?
Posted by Kathryn Hunt at 9:15 AM 1 comment: 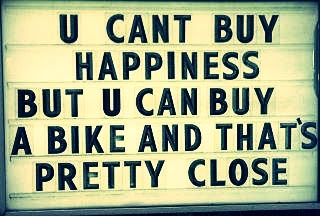 I just got back in from the first bike ride of the new year, to CKCU and back. It was -5 or so, with a heck of a headwind heading out, and it was a bit of a slog because the air pressure in my back tire is really low (oops: been out of town for a week and a half or so, bike maintenance has slipped). But I got back home and I was all hyper, bouncing around my apartment, with my cheeks still feeling tingly and my lungs still feeling a little burny. I may also have been singing to myself. A bit.

Cold wind, draggy back tire, potholes and all, the ride made me sing out loud. And I remember thinking, about three minutes out from home this afternoon, how much more fun it is to ride than any other mode of transportation I could pick.

Back when I started riding, I didn't have a car. So I didn't really have a choice. It was bike or bus - and then there was the notorious midwinter bus strike that taught me I could ride in the winter (and made me angry enough with the transit company that I swore never again to give them money for a pass). So I rode everywhere: miles and miles per day. When I got a car, I admit I worried a bit that I might get lazy. Opt for the car more and more, until my bike was growing rust in the hallway.

I guess I didn't need to worry. Sure, one of my current gigs takes me 40 km out of town and I have to drive to it, about three days a week. That cuts into my commuting time. And sure, sometimes I take the car so I can fit a lot of tight scheduling together (like on the nights when my radio show ends at 7:00 and I have to be at a meeting downtown for 7:15). But if I can, I still choose to take the bike most times.

I have the option of not riding my bike now, and I choose not to use it. Which is how I know I love riding my bike.
Posted by Kathryn Hunt at 5:11 PM 2 comments: