I'm heading into week three at my new job - which, incidentally, I'm thoroughly enjoying - and I have finally, finally cracked the code, put the pieces together, and traced one warm line through a land so wide and savage, and made a Southwest Passage to. . . well, to the Skyline Complex at Baseline and Merivale.

It doesn't help when your first weeks at a new workplace come with one of those deadly January weather combinations: major snow, then rain, then a deep freeze which calcifies all that rutted slush and pooled water into sheets of unrideable glassy crap. Last week I tried getting to work via Carleton University and the canal path west to Hog's Back. It was terrible. The canal was a glassy treacherous rink, I wound up walking lots of it, and I got turned around at Hog's Back and Prince of Wales, and then ended up a long way out of my way on Meadowlands, where this happened:

Anyway, I was late for work and starting to despair. When you can drive to work in 15 minutes and park there for about the same cost as bus fare, and you can bus in 45 minutes which is actually faster than riding, but you really, really want to keep biking because you enjoy riding your bike, it's a little scary to have a week and a half or so where you don't, actually, enjoy riding your bike and can't see a decent reason not to just drive or bus.

But I'd been asking around, to find out from other bikers who know the area whether the fabled Brookfield connection was cleared in winter. They said it was, and over the weekend there was a thaw that cleared some of the really impassable ice, so on Sunday, with the help of a MapMyRide route worked out on my computer and downloaded to my phone. I set off to see if I could find the link and track down a non-terrible route. 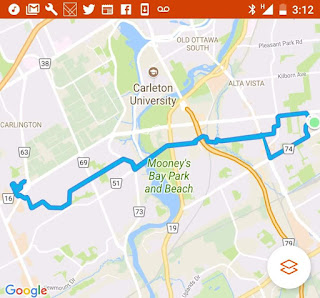 Brookfield turns into Hog's Back and joins Fisher, where I can duck over onto some quieter side streets (which are still full of ridges and islands of ice that are an inch or two deep, but you can ride it with some focus, determination, and the occasional dropped foot to skid along the icy bits and provide some stability: man I enjoy having those skills). At the far end I cut through a parking lot and across Baseline, and I'm at work. There's a bike cage in the parking garage.

It's still got its moments: if you want to stay on the roads, you get to have a fun five or six minutes on Hog's Back, where you pedal madly up and over the bridge in the middle of the lane, holding up the cars behind you, knowing that the minute there's a break in the line of cars coming the other way all the drivers behind you will be gunning it to pass, closely and in quick succession. But this evening I decided that the pathway running alongside Hog's Back between Mooney's Bay and the traffic circle is fair game to ride on, thus improving the route considerably.

It's such a relief to enjoy the ride again.

It also helps that the sun goes down a couple of minutes after five right now, and I'm not riding in the dark in the icy suburbs. Hey, tonight there was even a Super Blue Moon lighting my way. 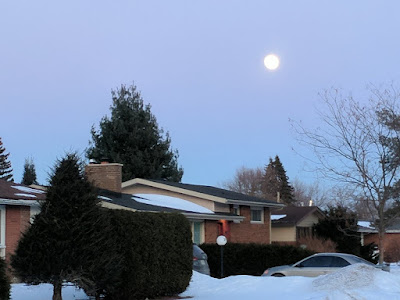 Posted by Kathryn Hunt at 6:39 PM No comments:

It's been a rough week, bike-wise.

It's been a great week otherwise: I just started a new job, at Agriculture Canada, working in my field (editing and communications) and on a project I think I'm going to enjoy, once I really settle in to it. All good things.

There is one downside. And its name is Baseline Road.

The building where I'm working is about seven kilometres from my house, directly along Heron (which turns into Baseline somewhere along the way). Heron/Baseline is four or more lanes of high volume traffic, with side streets, on- and off-ramps, and various other crap along its entire length. I've been trying to find a reasonable way to avoid Baseline. So far, I've come up short.

In a couple of months, things will be just fine: the Experimental Farm, an utter pastoral jewel in the heart of the city, will be clear of snow and will make up most of my trip. I'll zip along quiet country roads and pathways bordered by friendly cows, red barns and fields of corn, and that's not even a poetic exaggeration.

But they don't plow the roads or the paths in the Farm in the winter.

This leaves me with a couple of options. I ride straight down Baseline, in the snow, crowded by cars and sharing the outside lane with buses. Or, I find another route that will probably take twice as long (but be nicer). Or, I bow my head, surrender my badass card, and take the bus. So far, my solution has been a mix of all three.

On the first day, I drove. I had repairs to do on my winter bike, and I didn't know how long it would take to get there, and you can't be late on your first day.

On the second day, I took the winter bike, but stuck to the sidewalks (as no one actually walks on them.) Unfortunately, the winter bike's drive train took that opportunity to melt down spectacularly. Painful, back-wrenching gear-skipping ensued, and about a kilometre or two from the office the chain actually stopped speaking to the back wheel. I wound up pushing the bike a lot of the way. I was late for work and the bike is no longer rideable. My back is also still killing me. I took the bus home - surprisingly efficient, only took me about 45 minutes to get home.

So, this morning, I took the summer bike. I still stuck to the sidewalks, unwilling to risk sharing the road with crowded traffic on summer tires. Riding on the sidewalk sucks. It's covered in snow, and you're constantly skidding and slipping, or getting off to walk the bike across crosswalks that don't have curb cuts. Google Directions said it should take 25 minutes by bike. . . I made it in about 45. Good thing I left the house early. I locked the summer bike up with the winter bike and headed in to the office.

An hour into the day, an emergency with my other job came up, which meant I had to get home and re-export a file that needed - NEEDED - to be delivered by 1:00. There was no way I could bike home and back in that time. Plus, my back was still killing me from Day 2. So, I ducked out for a lunch break, called a cab, and went home. I exported and uploaded the file, confirmed with the recipient that all was well, and then grabbed my car and drove back to the office.

Now, I had three vehicles, all parked at the same building. If I had a bike rack, I'd have brought the bikes home with me. But I don't. SO. . . the bikes are at the office. I drove home. Tomorrow I will catch the bus to work, and take one of the bikes back with me at the end of the day.

So: so far, in order to negotiate a stinking traffic sewer of a road, I've used five different modes of transportation in the course of three days.

I can't keep this up.

Tomorrow night I find a way from the office to downtown, because I want to see a show at the NAC. And I will ride home from that show on the canal path, with a renewed appreciation for its glories. And then -- then I start looking for some route that will get me seven kilometres from my house without taking an hour or risking my life.


Posted by Kathryn Hunt at 3:41 PM No comments: