Easily, my least favorite intersection in all of Ottawa. Probably because, on the way home, I frequently have to go through it.

Coming home, I'm traveling on Bank, southbound. Traffic averages around 75 kph here, I'd say: faster at night, slower at rush hour with the high volume. To get onto Heron, I need to either a) merge across two lanes into the left turn lane and wait at the light (feasible at night or off peak) or b) cross to the southwest pedestrian island, then turn, join the traffic when the light turns green and head uphill eastward on Heron.

Check out the lines on that second option. Check out the way the road narrows, so that the southeast pedestrian island is further in than the one I just left. That pinch point is nasty. And if you don't bike with guts and fortitude, you get two pinch points: one at the pedestrian island, and another further up when the merge lane runs out. And by then traffic's gotten up a head of steam. And if you're really lucky, there's a bus at the bus stop that shares the merge lane. Or someone trying to turn out of the Tim Hortons parking lot.

The pinch point is made especially sketchy if you moved right to put a foot on the curb to wait for the light at the southwest corner, and if the vehicles behind you are accelerating away from their stop (and coming from a stretch of Heron that moves even faster, on average, than Bank does). There is also a lot of heavy commercial traffic on Heron.

So if I can, I like to merge over and use the left turn lane. It keeps me further right at that initial base of the small hill heading west on Heron, so I don't get crushed over into the pedestrian island, and it positions me so I'm already taking up space, and visible, without having to swerve further left (which is unnerving, against faster traffic).

When the merge is possible - at 11:00 pm when the road is blissfully empty and I can just swing across - it's great. Except for the amount of time I spend waiting at the light and nervously looking behind me in case the person coming up through the long turn lane didn't notice the blinking taillights and reflective patches. Then I get the advance green and go. Right?

Unless it's the middle of the night and there are no other cars in the lane. In which case my bike doesn't trigger the sensor, and I sit through two or three light changes without getting an advance green, and have to figure out a way out of the intersection.

So many things about this intersection are Not Good.

I started thinking this afternoon about what would make this intersection less terrible. Obviously, bike lanes would be a start, but the streets are pretty narrow already and would need to be widened (involving rather a lot of dirtmoving) to get lanes in. Further east on Heron, any widening would really cut into the tiny patches of green space that make up most people's front lawns. And the last thing this part of town needs is another bike lane that only lasts for an intersection.

Moving that southeast pedestrian island - even only a couple of feet further south - would be amazing, removing the most hair-raising pinch point in my day.

Failing that, speed limits further west on Heron, slowing traffic before it hits the narrow, more residential areas west of Bank, might help.

Admittedly, I also thought about the fact that when you get out where I am, the volume of cyclists isn't that high, and so maybe cycling infrastructure isn't a huge priority. I mean, I've been riding in this neighbourhood for years, and aside from an early, nerves-induced spill, I haven't had any accidents. (Some scares, but no accidents.)

But there are, what, five schools in the immediate area? Could those kids be riding to school if the road design wasn't so deadly? Maybe. Take a look at the masterful way that suburb design in the area has caused the main roads - Heron, Walkely, Bank, Conroy - to slice between classic little self-contained street pods, all full of crescents and loops that only have one way out, onto the Regional Roads. 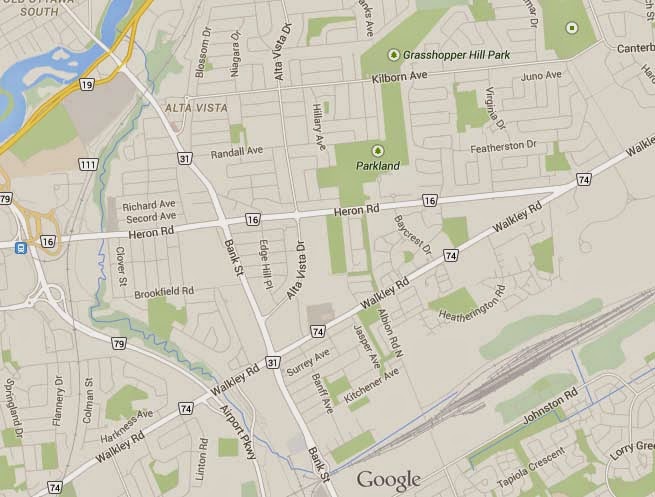 If you want to get from one of those little street pods to, say, your high school, you're taking one of the four-lane, commercial-traffic-laden deathtraps to get there. Or riding on the sidewalk. No wonder I see choking herds of cars around those schools at bell time in the afternoon. Or buses crammed with St. Pat's uniforms in the morning.

You can't change where those residential streets are: there are houses on them. But you could try to make Heron, Walkley, Conroy, and Bank less miserable. A start might be checking out where they intersect and noting little, teeny-tiny problems, like that pedestrian island that, if it was only two feet further south, would be so much less terrifying to a cyclist heading west on Heron.
Posted by Kathryn Hunt at 5:45 PM No comments:

Whether my ride to work (or wherever) is good or bad often hangs on the first five minutes. I get my bike on the road, I swing out onto the main street by my place, and the enjoyment level of my ride gets determined within a few blocks. If I get rattled, I might not get my good mood back. If I have a smooth first few blocks, I'm zooming along humming "The Bike Song."

Unfortunately, the main street by my place is Heron Road, which looks kind of like this: 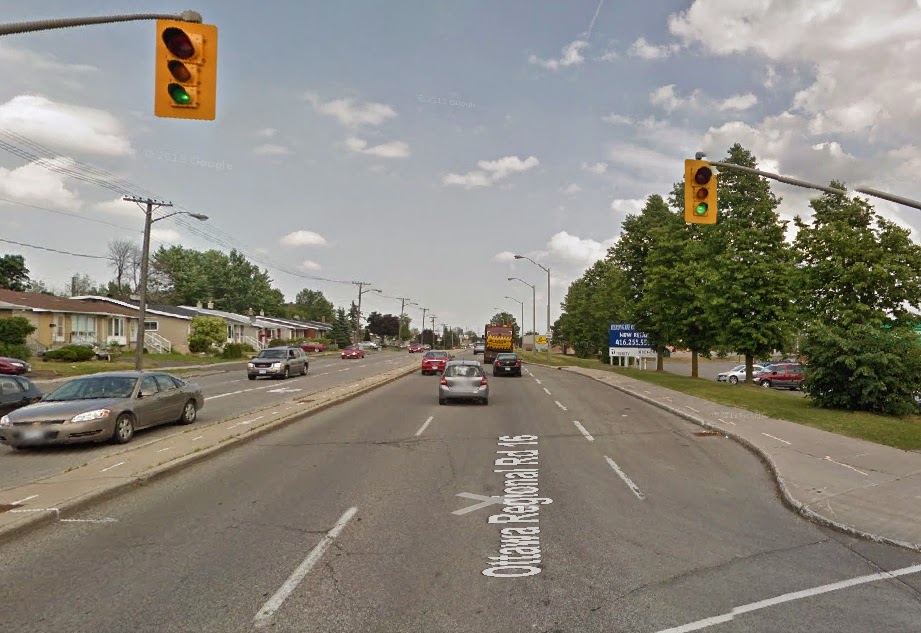 Four lanes, bus bays, and oh, right, one end of this road takes you right to the highway exit, so some of these drivers are fresh off a 120-kph drive from Montreal (and also there are transport trucks). There aren't any bike lanes or even sharrows. And the pavement's not great.

But that's not always a problem. Sometimes, Heron Road is just fine, and in fact, the "zoom" factor of being on a big road can sometimes start my ride off right, when I'm feeling bold and taking up my space.

And there can also be that one encounter that sets the course of your ride. Take this morning. I worked at home a bit, so as to let rush hour clear, then got on the bike to head to my office downtown. It was down below -10, with a windchill bringing it to -22, sunny, dry, clear. I was actually really looking forward to the ride.

But I was also having a strangely anxious morning, so I didn't know: would the ride help to relax me, or would a couple of close passes or a car rolling through a stop toward me reduce me to a ball of jangling nerves?

About a block in, I was feeling okay. But I heard the unmistakeable roar of a big truck behind me. Maybe a dump truck, maybe a transport. I was at a stoplight, so I twisted right around to look (and to show the driver my face).

Transport. And in the outside lane - my lane. I tried to give it the old "I am here" eyebeams, then turned and started pedaling when the light turned green. The sound of a truck working its way up through the lower gears behind you is really unnerving, but I try to remind myself they're not doing it to be aggressive, they're not revving, they're just gearing up freaking enormous diesel engines.

And then I looked back and saw that the truck was hanging back - way back - and waiting for a line of cars to pass on the inside lane before changing lanes entirely to pass me. I grinned and waved as it went by, hoping the driver saw me. I thought I heard a little "toot" in answer, but then again, I don't think truck horns do "little," so it might have been something else. Whatever: at any rate, I felt a moment of friendly connection with that driver, whoever he or she was, just because they'd pulled over and given me a ton of space.

One courteous transport truck driver, and the rest of my ride was fun, confident. The cold air was invigorating, merging through traffic was easy, and I got to the office in a much better mood than the one I left the house with. Even with the taxi who crowded me for space on Bank and the pickup that crowded me at a red light by the highway underpass. None of that fazed me much, because of one friendly transport truck driver in the first five minutes.
Posted by Kathryn Hunt at 8:37 AM No comments: