A couple of days ago I realized that there's a big communications gap for cyclists. You can't really use your words with people in cars, and there aren't a whole lot of nonverbal signals you can give, other than turning signals, and the "no, go ahead, go through the intersection, it's your right of way" waving (which in itself is apparently pretty confusing and always looks more annoyed than it should).

You have two other gestures at your disposal, I reflected. One is a cheery wave, from in front of or behind the vehicle that's just done something menschlike. The other is the one I used the other night when a car honked at me for being in front of him in the left turn lane, making a left turn. (Sure, it was a short honk, which could be meant to convey friendliness or "letting me know the car's there," but drivers: just don't honk unless you need the cyclist's attention. It's really hard to be clear that you mean it as a "friendly" honk, and it will just rile, startle, and/or irritate us.)

It's a little gratifying to use the gesture I pulled out on that occasion - and it's pretty much universally recognized and unequivocal, at least in Western countries - but really it's a little aggressive and crude. There's no subtlety. You go straight from "no worries" to "f*ck you, buddy." I started wondering if there was some other way to express "I have every right to be where I am, doing what I'm doing, so don't be a jerk about it." I played with the idea of the "whatever" gesture you do by making a W with your thumbs and index fingers, but discarded it because it takes up both hands, which you can't do on a turn.

But, I've got a one-handed variation worked out, I think. Now I just need to get people using it so it gains the currency of the middle finger. Voilá: the "Whatever, dude, don't be a dick" hand signal. Suitable for use when drivers honk needlessly, misunderstand the rules of the road, buzz too close, or shout incomprehensibly out of the window. Seems like adopting this more nonviolent, more laissez-faire-don't-give-a-care kind of gesture might do a lot toward alleviating road rage. I know I prefer just to shake my head and dismiss the idiots. Better for my blood pressure than steaming up and giving the finger. 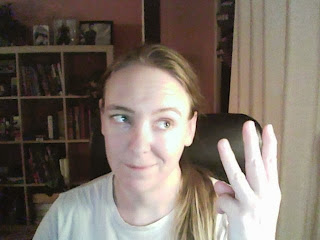