Saw this on Twitter just now and chuckled, and retweeted:


Hey, drivers. Here's a helpful flowchart if you're ever wondering if you should honk as you approach a cyclist. pic.twitter.com/nJ9jqLNVjs
— Bike Lobby (@BicycleLobby) November 24, 2014

Although, to be fair, I don't think I run into many drivers who do. I haven't even heard the vague and faint "friendly tap on the horn to alert them to your presence" argument in years. Maybe that's just Canada, or Ontario, or Ottawa.  I don't remember it being mentioned in my drivers ed class way back when (though, really, I don't remember any advice at all regarding cyclists in my drivers ed class). But someone in the responses to this tweet did:


@BicycleLobby When I took my NYC driving test maybe 8 years ago, the DMV test administrator ordered me outright to honk at a cyclist.
— Keith Snyder (@noteon) November 24, 2014

So apparently the misconception is still out there. I think I was honked at the other day for being in the left turn lane, but it was a quiet honk. Maybe that was a driver "letting me know" they were there. Though I'd already turned around on the saddle, while waiting for the advance green, to look back, so they should have known I knew they were there. (I'm a big believer that eye contact and seeing a cyclist's face goes a long way toward humanizing us in the eyes of drivers, so I do it when I can.)

Drivers, I gotta tell you: if you think that you're drifting up quietly behind us, more lightly than the zephyrs of spring, and we have no idea you're there. . . you're wrong. We know you're there. Most of us - with the exception of the hearing impaired, I guess - have been listening to you with half our concentration for the last couple hundred metres, and we're trying to calculate based on the sound of your engine how big your vehicle is, how fast you're going, and how much of an asshole you're likely to be. (We can also hear - and hate it - when there are two of you rolling up behind us side by side, incidentally.) So yes, the horn is pointless. And honking will almost always be read as aggressive by cyclists. It will also startle them, which is hazardous. So don't.

The best things you can do?

Give us lots of space. If you have a free lane on your left, what is keeping you from moving into it for a few seconds as you go by me? What magic forces you to keep your tire on the right side of the painted line?

Be patient if you have to slow down for a bit to wait for the right moment to pass. I promise you, you won't lose more than a few seconds. Stop and enjoy your surroundings for a moment. It'll all be over soon.

And for the love of Pete, wait until you've completely passed us before you hit the accelerator. I jump so often when a driver hits the gas right beside me, assuming they've "cleared" me and can now race on ahead.

Don't worry about letting us know you're there. Believe me. We know.
Posted by Kathryn Hunt at 9:50 AM 1 comment:

Hell, it's here. This is the view out my window as I type: 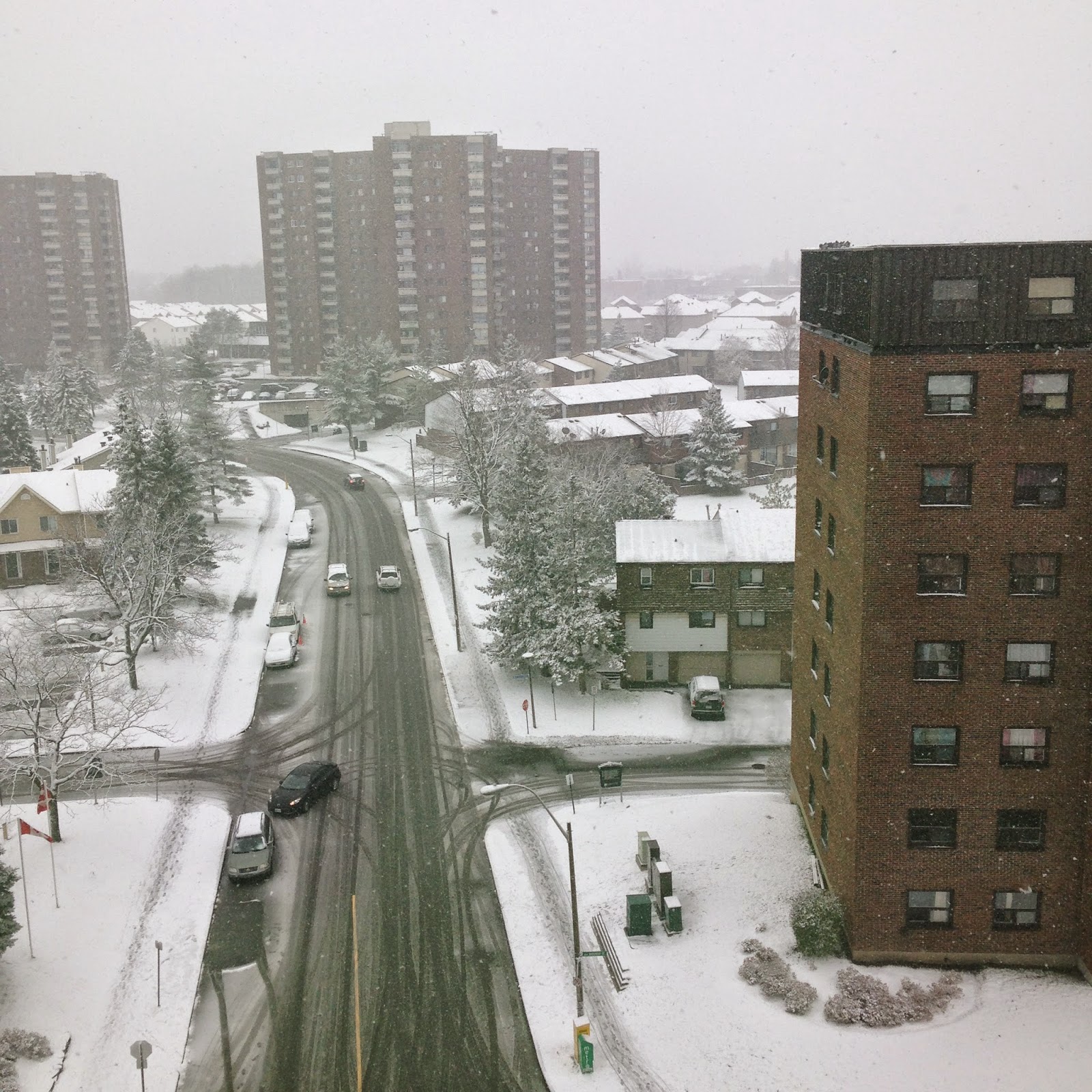 It's been fun watching the conversation online as winter comes in: do you get studded tires? When? One or two? Why are the bike racks on the 4-season Laurier lane taken out in winter?

Instead of installing seasonal bike racks on the 4-season @LaurierBikeLane - maybe it's time for some permanent racks. *cough Kent/Laurier*
— Lana Stewart (@modalmom) November 17, 2014

And who's still riding? Defiantly?


@alexthepuffin Hooray, my favourite. Response: "Yes, a death wish so I don't have to have this conversation anymore."
— Cassandra Fulgham (@cfulgham) November 17, 2014


Somehow, it feels like a switch was thrown about a week ago. Round about the first day the cyclists started warning each other via Twitter about black ice on the morning commute.  I had a conversation about winter gear with a friend in Ann Arbor over Facebook, reminded myself, reluctantly, of the location of my splash pants, and climbed on a chair to dig in the upper shelf of my front closet and look for a matching pair of gloves or mittens (a failed search: time to go shopping again) and my Toque of Sending +2, which also serves as my early-winter under-helmet hat.

Last night, I biked home from the Mayfair in blattery, sloppy big snowflakes, in the dark, at 6:00 pm, and remembered the way your bike gets quieter in the slush. Here we go!

One win of the season: I can't believe I didn't get one of these before, but I was at the moving sale at Tommy & Lefebvre on Saturday and they had North Face down mid-layers for 40% off. There was one left - and it just happened to be in my size.

A hardcore back country backpacker I know raved about his a year ago or so, but I never really thought much about getting one. I'm a makeshift kind of person. I'm notoriously slow to adopt specialized gear. But then one of my climbing buddies got cold while at the base of the crag on belay, late in the season, and she borrowed one from another of my friends. The next weekend, she had gone out and bought one. Instant convert. And I was at the T&L sale with another friend who had also borrowed the jacket and had decided she needed one. And it was 40% off. . . so I got one. And wow. Why didn't I have one before? It's like when I discovered merino.

So far, I've worn it on its own, rather than under a shell, in temperatures around freezing, on a hike and a couple of bike rides. And I love it.

The thing about the down insulation is that it warms up fast with body heat, and it holds heat really well, but it also breathes and dries out really fast. So I'm warm, but I can stop moving, and not have that sweat-cooling chilling effect. I also wore it on the above-mentioned blattery, snowy ride home, and it's waterproof enough to shake off wet snow. Plus it's light and it packs down, so the idea is, I can put it under another jacket or a shell when it gets colder. With the merino underneath I kinda get the feeling I'll feel invincible once the thermometer plunges.

So, bring it, winter.  I got my big tires, I got my Toque of Sending, I got my thermal jacket.

Posted by Kathryn Hunt at 11:06 AM No comments:

Posted by Kathryn Hunt at 4:31 PM No comments: