A white bike with blue spots

It was a little slushy this weekend. A little salty. A bit, well, February-ish. And so now Mike looks like this: 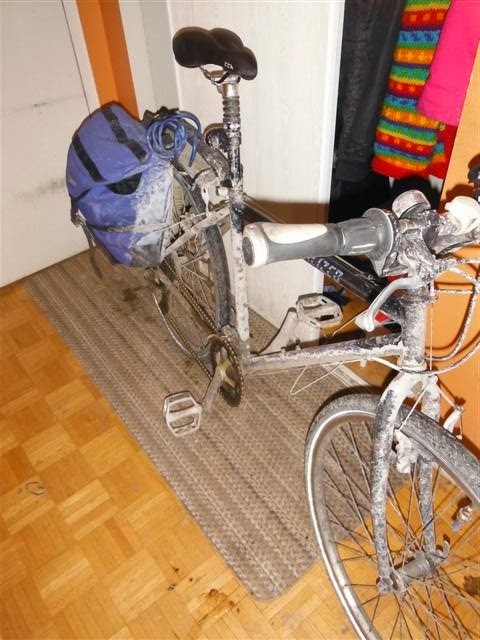 Note that Mike is, technically, theoretically, dark blue. But suddenly this evening, in an email to my family, I realized: he's not a blue bike with white spots anymore. Now he's a white bike with blue spots! 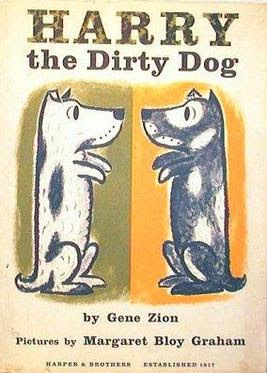 And just to add to the fun of this trip down memory lane, here's Betty White reading it. You're welcome.

Never a dull moment on a winter street

It snowed rather heavily again last weekend: 15 cm or something came down on Sunday. It was sliptastic. Today, though, the temperature had soared up to the -5 to -8 range and there had been enough traffic up and down the roads that I figured it wouldn't be that bad on the way downtown to my office. It was early afternoon when I headed down there (hooray for jobs that let me avoid rush hour the day after a big snow) and although my pants got wet to the knees it was pretty nice.

That is, until I got to the narrowed lanes due to construction going over the Bank Street Canal Bridge. It goes down to one lane now. There's a sign there reminding drivers not to pass bikes, for just that reason.

For a bit, it's wide enough to pass a bike safely, so I stay to one side, but as I got toward the middle of the bridge and the cars kept passing me, making it impossible for me to move over and take up the lane, I started looking behind me almost as much as in front, trying to find a gap in the passing motor traffic to get out and into the lane. When a white cargo van came up behind me and gave every sign of intending to pass me. At this point the lane was probably only a couple of meters across. I turned as I started to move left, saw the van attempting to gun for the narrowing space between me and the median, and shouted, "No you do not, you DO NOT PASS ME!"

He faltered, and I moved into the middle of the lane, and he backed off, and I rode firmly in the dead middle of the lane all the way to the stoplight, where the street goes back to two lanes. Then let the van past.

But, once I was downtown and the streets slowed down a little, I was comfy, even with the stretches of slush that had somehow been missed by the plows. I got to the office, did the things I needed to do, and decided to head home before sunset because of the lousy condition of the roads (pothole city). 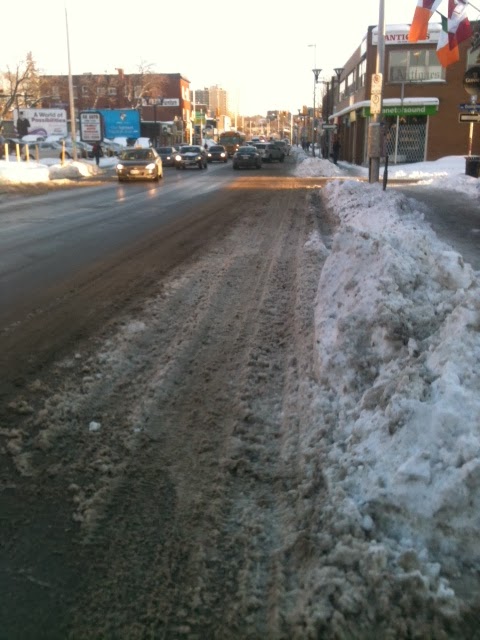 But by now I was into rush hour. And it was an - eventful - ride home. First there was the odd phenomenon that while the east side of the street (Bank, which runs north/south) was relatively clear of slush, the west side had a thin layer of slush spread over the entire right lane for most of it, getting more and less dense and more and less thickly spread, but pretty consistent. (I guessed that the east side had had more sun during the day, which probably melted it.) So I had to concentrate a bit more when I hit the slushy patches, or come further out.

In the Glebe, a big black pickup (no lift kit, I don't think, but it was a tall truck) passed me, as I was sluicing through one of these stretches of slush, then slowed down, almost as though pacing me. I looked over, trying to figure out what they were doing. The passenger was looking out the window straight at me, smiling I think, saying something to the driver - his mom maybe. Then they accelerated a bit, moving over into my lane as though trying to cut me off. (No turning signal, of course.) I said out loud, "What are you doing? What the hell are you doing?" and then shouted out loud as they really started moving into my space. I guess they thought I'd just hit the brakes and let them cut me off.

Yeah, right, I'm going to hit the brakes in the middle of an inch-deep patch of slush.

So I kept going, and they had to get back into their lane and let me by and then do whatever boneheaded thing they'd been going to do. At the next light, I heard a voice behind me. "You ever just shout and swear at em?"

I turned around and the guy behind me winked. Older than me, with a beard and a nicely craggy face, and kitted up for winter riding. I nodded and said, "Yeah, all the time." He commiserated about people who just do stupid shit, and mentioned he was visiting from Vancouver. Told me a story about getting right hooked by some idiot a couple of days back in Vancouver, and I said something about how annoyed I am that they don't hear you when you shout, and he said, "sometimes they do, it's the best thing you can do most of the time, just shout at them and wake them up to what they're doing." I told him about my cargo van from earlier, and that I thought maybe screaming at it had made the driver back off. We talked for a while, even though the light had gone green, then I said, "Hey, have a great visit," and he said, "Ride safe," and we both pedaled off.

Which made up, in part, for the moron who decided it was a good idea to get mad about waiting for the car ahead to make a left turn, yanked the wheel over, and slammed on the gas to pull out and around him - cutting me off as I came by in the through lane. Or the man that zoomed past me with a couple of inches (really) to spare when I was trying to avoid a foot-wide, two-inch-deep pothole just before the Billings Bridge. And the several other cars that did not, although they had the space to, move a lane over while I climbed Bank Street past the river. And in particular the shouting, throat-hurting climb up Heron Road in which I screamed out loud at two consecutive cars (one of them a Blue Line taxi) that sped past me at about 70 kph and about a foot from my leg.

And then finally there was the burst of sheer rage in which I shouted, "Fine, to hell with all of you, I'm riding right here in the exact fucking middle of the lane and you can all just DEAL!" And I did, on a burst of rather cathartic fury, the rest of the way home.

Because that is, in fact, in actual really for true fact, the only safe place you can be when the snow has made the roads this narrow. If you move right even a couple of inches off that right-hand tire track, the drivers will think they can pass you, safe or not. It's way safer to be slap bang in the middle of the lane, pissing drivers off, causing them to rant impotently on comment boards and Twitter about asshole cyclists who don't know any better than to get off the roads in the winter (and there was a recent poll on CBC.ca that reported around 45% of respondents were in favour of actually banning cycling in the winter, if you can believe it). Own it. Take up that lane. You'll feel better, and you'll be safer.
Posted by Kate (and Mike) at 4:08 PM 1 comment: