Too much to ask for some people


Construction's still ongoing at Billings Bridge. Generally, I don't have too much trouble there: cars let me take the lane, everyone's pretty polite. But this evening, I noticed as I was heading through the narrow, reduced-lane bit (in the middle of the lane, taking up space all legal and stuff) that the slightly elderly green car behind me was pretty close. I turned and looked back and the car was a couple of feet off my back tire. But whatever: he couldn't pass me, right?

Wrong. At the first small break in oncoming traffic, while still on the bridge, he pulled out into the oncoming lane (in a construction zone!) and gunned it past me, then swung back into the correct lane long enough to turn right onto Riverside. Other drivers honked: I made the "WTF?" gesture. (You know, that despairing-of-humanity, palm-to-the-sky kind of move.)

Should I point out that Billings Bridge is a grand total of 100m long?
Posted by Kate (and Mike) at 5:39 PM 5 comments:

Billings Bridge is under construction. A huge concrete barrier runs down the middle; construction workers do something terribly mysterious and plastic-shrouded on the eastern side; and traffic has been diverted into the two western lanes, reducing the bridge, temporarily, to two lanes rather than four.

The first time I came across this on my bike, I thought, "Oh shit." The last bridge near me to get this treatment was the railway bridge at South Keys, and I had a scary time of it some nights trying to get into the single lane and hold my own without some cowboy in a car thinking they should try to pass me.

To give the Billings Bridge construction site its due, there are a lot of signs telling people to share the road, and there are opportunities to escape Bank Street along Riverside which lowers the traffic rate. Still, going through the area is a test of nerves, because you have to take up the full lane. You have to ride right smack dab in the middle so no one thinks to try and pass, and you have to be totally unembarrassed about it.

I've been doing okay with it, but I've come across a couple of awkward things. For one, when traffic narrows to two lanes, I have to nudge in, and generally from later in the game than a car would. I'm resisting feeling like "that guy" - the one that, in a car, races past everyone in the open right hand lane, only to shove over into traffic at the last minute. I don't think I'm that guy: but I do pass a bunch of cars on the right, because I'm in a sort of semi-half-not-really lane, by sheer virtue of being on a bike.

My hat went off this morning to the lady in the dark grey Vrtucar, who left space for me to nudge over and into the single lane, behind another car who really didn't leave any space. This lady hung back enough to let me through. I pedaled along in the single lane, trying to go fast enough not to be holding up anyone behind me, and then came out the other side of the construction, past Riverdale, and headed up the hill. At this point there are parked cars to the right, and I had to come out into traffic a bit again. Looking back, I saw her, hanging back, giving me space to come out around the parked cars as well. As soon as I could I moved to the far right lane to let her by, and gave her a big smile. She waved back. It made my day. 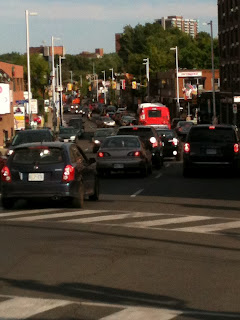 Coming home, I had the opportunity not to take Bank, but just didn't think, and found myself, in the middle of Old Ottawa South, in the most crawling traffic I can remember. For some reason situations like this make me stalwartly not hop onto the sidewalk. There is construction, it sucks for all of us, I'm going to crawl along with all the other traffic. I feel like I'm setting some kind of example, although I fear it was lost on the eight or nine people who passed me, riding on the sidewalk, while I sat still in the fumes. But finally, looking at the snail-trail of cars inching their coughing, exhausted way along the road in fits and starts, I said, "Hell with it, I have the option of walking, these poor bastards don't," and I got off the bike and started walking it along the sidewalk.

I made better time across the bridge than the cars. I know this because I was two cars behind a bus when I got off, and I stayed ahead of that bus the whole way to Riverside. Another cyclist had stopped in traffic behind me just after I started walking. "You're probably better off walking," I called to him.

"I'm making better time," I said, and kept on going. I don't think I saw him again. Not sure if he stayed on the bike or not. I got as far as Riverside and got back on the bike.
Posted by Kate (and Mike) at 4:44 PM 1 comment:

Folks in cars, I feel I need to say this again, just because it happened again this morning.

When you shout something out the window at a cyclist, regardless of whether it's friendly advice, outright harassment, or "hey, didn't we meet at that vernissage last week?" you need to know one thing.

We can't hear you.

Whatever it is you said, it sounds like this:

We just can't hear you. Even if you were going to say something helpful or informative. So don't bother.
Posted by Kate (and Mike) at 2:59 PM 5 comments: