It's always the big black pickups. 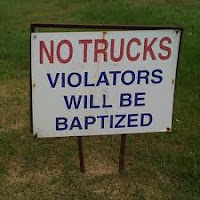 So I needed to get across the road this morning, just near Saint Margaret's on Montreal Road. I'd been working on the south side of the street, and needed to get to the north side to ride downtown. I walked the bike down to the corner and pushed the button for the crosswalk. Waiting for my light to change, I spotted a big pickup, across the street, apparently waiting for the light to turn left. I think I noticed him because he was edging up, anticipating the light. While waiting, I got on the bike: why not?

When the walk sign came on, I started across the crosswalk, and the truck started his left turn, at speed, as though I wasn't even there. I looked up and saw its huge grill coming for me. "Jesus, buddy!" I yelled, as I swerved to try and stay clear of him. He gunned it through the intersection - I got enough of a look to see his dog looking out the open window at me, so this time, just this once, I can assume the driver heard me yell.

I got across the crosswalk and pulled up so I was parallel with the curb, ready to head west, waiting for the light to turn green. "It's one way," I heard someone saying behind me. Not sure what he was talking about, I didn't answer. So he walked up to me, and repeated himself. "It's one way, there."

"What is?" I asked, totally confused.

"That street's one way," he said, and pointed at the street whose corner I'd been standing on waiting for the light. Now, partly I was annoyed that he felt like it was his place to justify the truck driver's assholish behaviour, but also that he had only looked up when I shouted, had no idea what had actually happened, and still thought he'd scold me for something I hadn't done.

"I didn't come from there. I was at the crosswalk." The guy didn't seem to understand, so I gestured at the clearly painted crosswalk. "He saw me waiting. I was never on that street." The guy shrugged, in a what-the-hell, I-don't-care kind of way, and the light was green anyway, and I pedaled off.

I guess it bugged me because the guy assumed he knew what had happened ('stupid crazy cyclist ignoring the rules and just riding wherever she wants.') And also, sure, legally I shouldn't have ridden across the crosswalk, although I'm pretty sure the truck driver would have pulled the same shit had I been on foot. But it really rankled that this other guy thought that, even if I was in the wrong, it was okay for someone to 'teach me a lesson' with an F-150. That someone in a truck that size is allowed to think, "Well, I'm supposed to be driving here, and if you get in my way it's your fault."

I really wish I had the courage, one of these times, to just stop in the middle of the intersection when someone is driving like a bully in that way. Just stop. In front of them. But of course I don't: I scurry out of the way of their great big powermobile. And I bet they love it.
Posted by Kate (and Mike) at 1:13 PM 7 comments: