Way back in the Before Time, when there were Other People and I got to ride my bike every day to a magical place called An Off Iss, an article appeared on CTV News about an unsafe pass of a cyclist by an OC Transpo bus. And there was a reply that still, to this day, unnerves me. 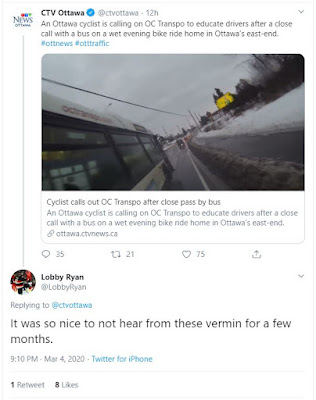 That word "vermin" was chilling. I've heard it all in the comment section but "vermin" is some murderous shit. I wasn't the only one to notice it, and there was a quick flurry of conversation among a bunch of Ottawa bikers. I went to the guy's profile to report him (in vain, I knew) to Twitter, and as I scrolled through it I started to get really disturbed. This guy was a bus driver. And he really, really hated cyclists. 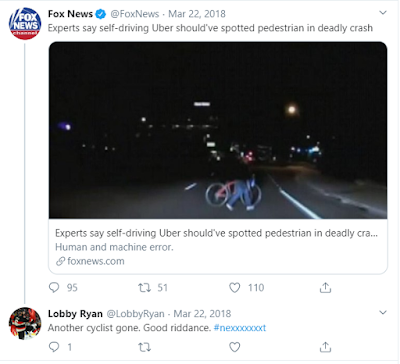 I'll spare you the rest of it, but he hated transit riders, too, as well as the police, the City, his coworkers, his management, women, minorities and immigrants. His timeline was sickening. I started grabbing screenshots and when I'd gone back far enough I had to get up and walk away from my computer to compose myself before I came back to file a report with OC Transpo. The rage and hate and contempt oozing from this account was scary. I honestly believed I was looking at someone who could turn violent. I pray he is single.

I filed the report, and didn't hear back. But I couldn't forget about this guy. Almost every time I'm near a bus, now, I can't help wondering if he's the driver. On Twitter, a number of people I know can refer to "that psycho" and we know who we're talking about.

And he's one of a number of toxic, anonymous accounts run by City employees that target and harass advocates for pedestrian, cycling and transit rights. Some of them switch between sock puppets, and their harassment has caused a few people to lock or protect their accounts, or shut them down altogether.

Anyway, nothing happened for a couple of months. And then I saw someone post on Twitter to complain to OC Transpo about a driver who had nearly hit them while they were waiting on a street corner. Drove right at him, could see him, didn't apparently care. And I remembered, as I do once every couple of weeks or so, about "the vermin guy." So I posted in response to remind them that I never heard back. 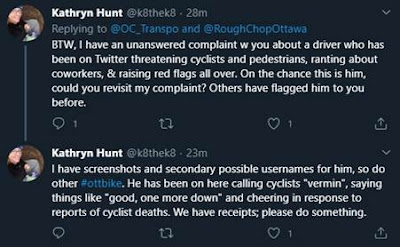 I was kind of amazed to get an email back the next day, and not just that, an email from a real person, a supervisor, who had clearly seen the tweets and looked me up in the system by name to find my report and contact information. He thanked me for flagging this again, and said he'd been looking into my complaint from March. He agreed that the user's comments were disturbing, "and does not represent the views or attitudes we seek out in employees (to put it mildly)."

He added, "I can tell that this complaint was investigated back in March when it was made. However, I don’t have specific details around the resolution. I hope it’s obvious that we take this type of language very seriously. I wonder if we may have had some trouble identifying the user."

He asked if I had any other information about the guy that might help. So I went back out to the Twitterverse, remembering that others had found some possible alternate accounts for him, and put the call out. Pulled together what I could. Someone else had collected screenshots of a number of troll accounts that had been harassing people, a couple of which might have been him; another person sent me a letter he'd written to his councillor about it. I pooled it all up and sent it back, with sincere thanks for taking it seriously at last.

Even if we can't find this particular guy, I hope there's some small step toward fixing the culture (or subculture) at OC Transpo that has produced these angry, vicious trolls. They've driven people off their accounts, they've harassed citizen transit commissioners and advocates and councillors, and they're increasing the volume of the online hate against all of us not in cars.

Getting a real person, who had clearly seen my post and gone looking for my report, and been disturbed by what he saw, was also hugely heartening. So often you get form letters back: "Thank you for your feedback, we will investigate." This was a human being, who wrote like a human being, and even that much felt like a win.