Last week, I was on CBC Radio's Ottawa Morning for a short interview about the new markings on Wellington Street near Parkdale. The city has painted bike sharrows, flanked by lane lines, down the middle of each lane, and the words "DOORING ZONE" alongside the street parking area. The idea is to encourage cyclists to go into the middle of the lane in that stretch, because there is really no room for a bike and car to travel side by side. 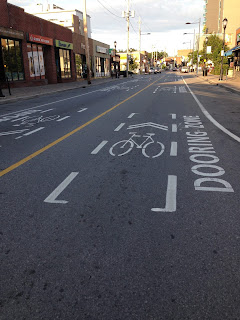 Since I've written recently about taking the lane, they called me up, and I rode down there and met up with a reporter on a corner and talked to her about it.

On the way there, in Old Ottawa South near the Lansdowne Bridge, I was squeezed and forced out of my space on the road twice.

I talk a good game about taking the lane. I believe what I say, too. It's safer. When I have the guts to do it, I feel the bubble of space around me expand. It's almost as though drivers coming up behind me see the distance between my tire and the curb, and match it, out of some strange instinct for symmetry.

(I would love to see a study backing up whether that's what happens: it probably isn't.)

But since my column and radio interview, I've been more and more conscious of the amount of will it takes to stay in the lane. And of the fact that if you waver, even a little, things start to feel very dangerous. You're either right out there about a metre from the curb, and cars are giving you some clearance, or you waver a few inches and suddenly you've given them the proverbial inch. You're being herded into potholes, squeezed into pinch points, and riding in the door zone, and it's really hard to get it back. I don't know what the sweet spot is, exactly: but I can feel when I've lost it.

And even though I am such a big proponent of taking up space on the road, often I lose my nerve. I let myself cringe away from the cars, and then it's happened again, and on top of being annoyed at the traffic, I'm annoyed at myself. For caving. For giving in. For letting my courage slip for just a second or two, long enough to let my wheel drift leftward, until suddenly that pickup driver thinks there's enough room to squeeze past.

But then I get mad because it shouldn't be an ongoing, conscious act of courage just to be in the section of the road you're supposed to be in. Sometimes, that's enough to get me back in position.
Posted by Kathryn Hunt at 1:33 PM No comments: