I knew I wasn't going to have time to review David Byrne's book The Bicycle Diaries (what I have read is lovely: must continue reading and post review) before the Fall Festival descended. Which it did, last Wednesday. But, on Friday night, I did get to meet Mr. Byrne, and I got to sit in on the session he coordinated, a panel on "Cycling and the Livable City."

Byrne is the kind of celebrity that still thinks he needs to show his name tag to the bartender to get his free drinks. (My friend Terry, who was tending the bar, was amused when he tried.) And he structured the panel so that it was completely not about him, not about his fame, not about the Talking Heads or anything else like that. He made it feel like he was really just there to facilitate putting all these minds together and having a town hall meeting.

He lucked out with Ottawa. There's nothing this town likes more than a good town hall meeting. Unless it's a chance to cross-examine a representative of the National Capital Commission. Oh, wait - they got both! Heaven!

The panel consisted of Byrne; Jeb Brugmann, the urban theorist; a representative from BIXI (I've sadly forgotten his name: he was warmly received, did a presentation about BIXI, and then got no questions directed at him for the rest of the session) and Marie Lemay, who's now the CEO of the NCC.

Most of the questions got directed at Lemay, naturally. And it was clear that the 400+ people that were in the room were almost all cyclists. There were questions about whether the paths would ever be clear for winter biking - I thanked the woman that asked that one - and the answer was, they're hoping to run a pilot project this winter where they'll keep one path maintained through the winter. I cornered Lemay in the green room afterward and asked her which one. She told me, but I don't think I can actually say, since she doesn't want to start any rumors, and the pilot project itself isn't a given yet. I'll just say it's a popular path... but sadly not part of my commute. There were a lot of questions about what the city was ever likely to do to bring street cycling up to the levels of the bike paths. Lemay couldn't answer that one, since she doesn't speak for the city: it seems clear though that most cyclists in Ottawa think that the city doesn't actually care about cycling as an option. There was some hostility towards City Hall apparent.

And there was at least one left-field question where a woman asked about whether Ottawa was going to start "importing" "the kinds of bikes they have in Europe" that you can ride wearing your business clothes. I refer her to my second ever post on this blog, about biking in a dress. You can get those bikes at any bike shop, darling. This afternoon I passed a gorgeous red Raleigh bike - swoopy and with lovely big chrome fenders and a squooshy seat - chained outside a Bridgehead. Which I'm sure you would have looked lovely on in your heels and work skirt.

Anyway, the biggest issue that came up in the session was probably the fact that while we have great paths here, the street biking can be ... dicey at times. The NCC, and Marie Lemay, seem to be really committed to making Ottawa a cycling-friendly city, and BIXI seems to have had a really good test run here. But then you get off the paths and onto streets with little or no space for bikes.

Just found an interview on All In A Day with Roger Geller, the cycling coordinator from Portland, Oregon - who was a guest speaker at Citizens for Safe Cycling on the 20th - that talks about some of the same issues too. One of the neat things about having David Byrne here for this panel was that it was a chance to see which issues are constants around the world and how different places deal with them.

And I picked up a copy of the Citizens for Safe Cycling's "Chain Mail" newsletter... I may have to join up.
Posted by Kate (and Mike) at 5:37 PM No comments: 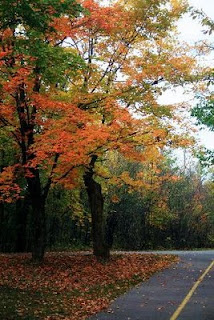 I haven't had a whole lot of time for writing lately - the Writers Festival is next week (starts Wednesday) and frankly, the panic began setting in about two weeks ago. But I've been wanting to.

See, last week was another jarring step down on the temperature scale. When I last posted, I was wearing a t-shirt and hoodie. Now, I've upgraded. T-shirt, thick sweater, and bigger hoodie. (Thanks to a clothing swap at a party I went to last weekend I have more of the aforementioned, not to mention a huge hoodie that a friend of mine bought to stay warm while she was pregnant, and which is now way too big for her. Just right for me with my sweater on under it though.)

Each time the temperature does this, I go through a moment of adjustment. I think, ah, damn, it's 5 degrees out, this is going to suck... and then I pull on the gloves and get on the road and it isn't so bad. Then, this week, I started thinking, ah, damn, there's frost on the cars and it's -5 with the windchill factor. But I pull on the extra layers and haul the bike out the door anyway, and to be honest I'm actually, um.... enjoying it. For one thing, you don't have to dodge nearly as many people on the paths. And for another thing, you get that chilly slap in the face from the wind and your cheeks feel alive for a good long while after you get where you're going.

And let's be totally honest... it's kind of good for the ego. Even if you're not really all that rugged, it makes you feel all tough and cool to bash along through the gorgeous cool fall wind with your gloves on. It's like bringing your high-tech hiking gear for a 3km loop through the woodlot.

When it hits -10, and then -20, and the snow flies, the cool factor may well wear off. Or, I might just get even more obstinate. Either way I'll have to remind myself that the transition doesn't really take all that long. I'll probably also have to get some long johns though. Jeans. Brr.
Posted by Kate (and Mike) at 7:17 AM No comments:

After I posted the site for Yakkay, I sent the link off to Miss Scarlett's owner, knowing she would probably go into transports over the pink tweed "Tokyo" helmet. Which she did. And then, while I was busy lamenting the fact that they didn't seem to have an online store, she put her googling skills to work and found the following places in the UK and France that carry them, and sell online. Now I just have to lament the fact that the Yakkay helmets are about £95 from all of them... and that I'm now looking at the beautiful capes and messenger bags and ... are those reflective spats? The side of me that sighs over anything steampunk must, for the good of my wallet, be suppressed!

Now it's true that Mike and I are anything but fashion leaders. And I might look a little silly in some of this wonderfully Eurochic gear, bashing along Bank Street on Mike, who is a bit of a thug really and wouldn't know what to do with a cravat (other than maybe tuck it into a back pocket á la James Dean or something.) These clothes are more suited to a five-speed city cruiser like most of the bikes on these sites. And those are bikes designed for the cobblestones and paved pathways and small streets in Europe. I lived in Bonn, Germany, when I was eighteen, and biked to high school. It was great - and I still have flashbacks, in the fall, when the air gets cooler and damper and you can smell the fallen leaves starting to turn to mould, of the trip to school on the white bike I borrowed from my host family, the autumn streets and the paving-stone yard of the school I went to.

It was much more civilized than my seven-mile crank to work. It involved better posture, and a little bell, and crosswalks and side streets that cars couldn't fit on, and the ability to pedal along and have a conversation with your companion. And you could be well dressed, nay, even stylish. (And man, were my classmates stylish: even the goths were immaculate.)

And maybe there's a smidge of nostalgia in my longing for stylin' bike clothes. I was never into Spandex, and MEC is more my usual comfort zone, but sometimes I get all romantic over the idea of being... so gosh darn European. Mike, however, feels differently. I get the feeling if I got him a wicker basket or an embellished chainguard he might rebel.
Posted by Kate (and Mike) at 7:39 AM 2 comments: