My Twitter feed blew up yesterday. I was only checking in occasionally, but I started reading back through the conversations and gathered that the police - at the request of local residents - were handing out tickets for people not walking their bikes on Argyle Street. The feed was heated, and sometimes quite funny, and generally polite, but the opinions were all decidedly different. 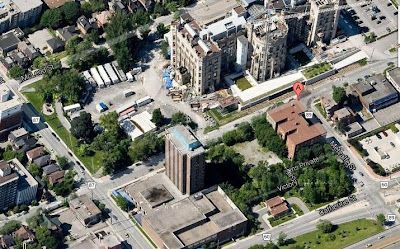 It took a while to figure out that it was about walking bikes on the sidewalk, rather than not riding them at all. The problem is that Argyle is one-way west, and people have been riding east on the sidewalk. And they're doing it because the streets around Argyle are all pretty scary - arterials, with exits and on-ramps to the highway that mean cars are either coming off the highway and adjusting their speed, or speeding up to get on it. And there are one-way streets everywhere, making you go four or five blocks out of your way to get where you're going at times.

Personally, I stay off the sidewalks, and ride around on the maze of one-way streets, going out of my way a block or two north or south as necessary.

A lot of this would be solved if most of the small, quiet, safer-feeling, one-way side streets downtown had contraflow lanes for bikes. There are already a couple in Ottawa. (Interestingly, I just learned that contra-flow lanes weren't clarified as being legal in the Ontario Highway traffic Act until 2012; while that stopped Toronto planners from installing them it doesn't seem to have stopped Ottawa.)

I can see a couple of advantages: it would get cyclists off the sidewalks - at least, the ones like me who don't want to be there; it probably won't have much effect on those dedicated sidewalk cyclers. It would give cyclists some options that would get them off the faster, busier streets. And, more people might figure out how to use them. I know I am regularly irritated by the people who bike the wrong way in the contra-flow lane on Cameron Street near Brewer Park. But they can't really be expected to know better when there are so few lanes like it.

And I know in person how much better Cameron is with the contra-flow lane. I used to ride down it all the time to school when I was going to Carleton. There was no contra-flow lane then, so I rode the wrong way, west, down the street. At the bottom the street made an abrupt turn - a left, for cars coming down Seneca, which turned into Cameron. As I was crossing Cameron, heading for the pedestrian path across Brewer Park, a car came off Seneca. I popped out in front of the car, and got hit.

I was fine: knocked over, scraped up, a little rattled, as was the couple in the car, but fine. Still: now, there is a contra-flow lane for the cyclists that - face it - were going to ride that way anyway. At the bottom of the street, where Cameron meets Seneca, there is a stop sign for the cars on Seneca. Bikes have right of way across and into the park. And it's all a lot safer.
Posted by Kate (and Mike) at 6:37 PM 2 comments: