As I was leaving my apartment complex's recreation centre this evening, a man going by saw me unlocking my bike from a tree, putting it on the pavement and switching on the lights. "You still riding?" he asked.

What I didn't say, and thought of about three seconds later:

No, in the winter I just take the bike out into the parking lot so it can pee.
Posted by Kate (and Mike) at 2:46 PM 6 comments:

Why it's so much harder in the cold 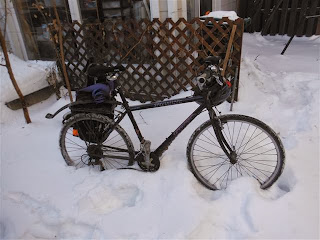 I rode down to a friend's place in Chinatown yesterday to go snowshoeing. Packed the snowshoes into the panniers and headed downtown. But it was sludgy, hard work. I got ice in my eyelashes and I kept getting my throat uncomfortably clogged because I was breathing hard and it was -30 out (or something like that). It just felt like I was towing a refrigerator (except without the welcome extra boost a refrigerator might have given me on the downhills). I kept checking to see if my back tire was flat, it was that hard to pedal. And by the time I got to my friend's place I was trembly-tired and my lungs were killing me.

And, unfortunately, I'd been sweating, thereby soaking my wool base layer, which meant I started shivering as I cooled down in my friend's car on the way to Gatineau Park. (That is something to seriously, seriously think about when biking in the cold: when you stop, do you have a change of base clothes, or long enough inside to dry out before you have to go back outside again?)

But, happily, I got myself nice and warm again pretty fast with a vigorous snowshoe up about 150m of vertical gain, then a moonwalking romp back down all the steepest bits. 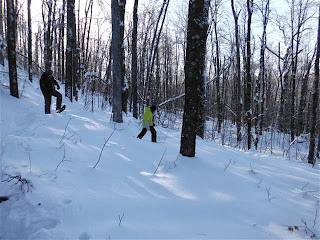 Anyway. Why, oh why, I thought to myself, is it such hard work to bike in the cold? It's not just me: a friend of mine quit biking when it got really cold last year because it was such hard going. So I went out looking for answers.

According to Lennard Zinn at Velo News, air resistance actually plays a part: as an aerodynamicist he consulted says, "Temperature has a much more pronounced effect on air density than humidity: cold air contains more molecules per cubic meter." Another points out that "The drag you experience at 25 degrees Fahrenheit is about 10-percent greater than you would experience at 75 degrees Fahrenheit. This is approximately equivalent to the difference between riding at 20 mph and increasing your speed to 21 mph."

Add to that what I found out at Fit Werx: tire rolling resistance is lower in the cold, making your tires sludgy. "Tire rolling resistance measures how much energy it takes to roll your tires over the pavement. When a tire contacts the ground it deforms and then springs back to its original shape. Every time this happens energy is lost in the form of heat. A warmer tire has improved elasticity and will lose less energy during this contact with the pavement."

The folks at Icebike also agree with my friends' theory that colder grease & bearings will affect you as well, making it harder for the whole drive train to turn, thereby making you suffer. (And look! a website devoted to winter biking! Hooray!)

Then there's the psychology: the way your scarf and jacket and hood and hat and helmet all combine to make it more or less impossible to turn your head to shoulder check. The only turns you can manage look a bit like Michael Keaton's Batman: shoulders and neck and head as a single molded-plastic unit. That just adds to your feeling of clumsiness and lumbering. And there's the sore lungs (after a pretty high-activity day yesterday, my lungs still feel just slightly sore from all the work in the cold air).

But. BUT. I was riding back home from my friend's place yesterday, after dark, down Bank Street through the Glebe, and as I went past a cluster of bundled people standing at a bus stop, I heard one of them say, "Nice!" and threw him a grin. Sure, I had to downshift, a lot, to get up that mile-long hill before my house. But I felt pretty badass when I got home.