Seriously, how cool is this? Snap-on, instant - even portable - snow tires. Because I've never needed studded tires all winter (and changing my tires frequently is not my idea of a fun time), and it's not really icy often enough to warrant the expense. But if I had these puppies... I would carry them with me just in case of bad weather. I'd probably catch myself watching the sky and hoping for storms, just so I could whip these awesome little gadgets out and be all like, "yeah, that's how I roll."

They're designed by a Dutch guy named Cesar van Rongen. And I want them. Like, a lot.

For quite a while, I've been fascinated with the late-1800s bicycle craze - the huge leaps in technology and attitudes that happened in cycling then, the experimentation with design, the way people thought this - this - was going to be the future of human transportation, the "working man's horse." Bikes symbolized progress, freedom, innovation and a brave new world.

Once people settled on the "safety" as the model for bikes, their basic design never really changed again - those bikes are totally recognizable today. Would be rideable today. But no one really saw cars coming, did they? 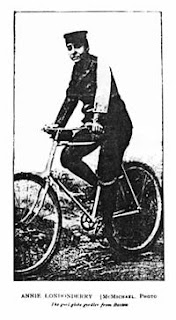 Still, the 1880s and 90s were full of pioneering, adventuring cylists (in completely fabulous outfits). Wheelmen and women who would decide to do things like ride a bicycle on some kind of incredible long-distance trek. There was quite a fad for riding around the world on your safety or - in some cases - your ordinary. My personal favorite case was Annie Londonderry (she started out Annie Cohen Kopchovsky, then named herself after a bicycle brand as a marketing move), who was the first woman to circle the world by bicycle and did the whole thing on sponsorships. Lots of these travelers were funded by bicycle, gear, camera and clothing manufacturers, and by newspapers, who would ask them for regular columns.

Anyway, I get a regular email newsletter called The Writer's Almanac, and yesterday there was an entry about one of those world-circlers: apparently January 7th was the anniversary of the first of those journeys - undertaken on a tall wheel of all things. I'll quote it here, because I find this stuff just fascinating. 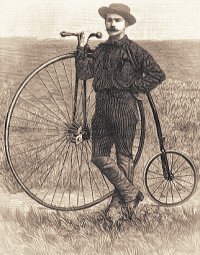 "On this day in 1887, Thomas Stevens became the first person to circle the world by bicycle. Born to a grocer in the suburbs of London, Stevens convinced his father to let him sail to America, when at 17 he had already saved enough to cover his passage. Once in the States, he found work as a rancher and, later, in a Colorado mine, where he hatched a plan to make a name for himself by being the first man to ever cross the U.S. by bicycle. Seven others had already tried and failed. Stevens managed to stash away enough of his wages for the trip west to San Francisco where he promptly purchased a 41-pound 50-inch Columbia tall wheeler, called the "Ordinary." He had never before set foot on a bicycle and had no idea how to ride it, but after giving himself a crash course around Golden Gate Park, he soon set off toward Boston with a change of socks, a Smith and Wesson revolver, and a thin coat that he also used as a tent.

In 1884, there were no interstate roads or rest stops, and when crossing the Sierra Nevada mountains, Stevens had to push his bicycle across railroad bridges, sometimes hanging his bike over the railing when an unexpected train passed. He scared off a mountain lion, was bitten by a rattlesnake, and was arrested in Chicago for riding on the sidewalk. He rode into Boston 103 days after leaving California, having traveled 3,700 miles.

That winter, he published an account of his trip in Outing magazine. Its publisher, Albert Pope, was also the owner of the country's largest bicycle manufacturer, and he pitched a worldwide tour to the young cyclist, offering to pay his way. Stevens accepted, and the following spring the 30-year-old set out from Liverpool headed east. He crossed through Europe unscathed and into the Ottoman Empire where he was often the first white man and first bicycle that locals had ever seen. Towering nearly four feet above others while on the bike, Stevens drew a lot of attention, and in Turkey he had to fend off would-be robbers at gunpoint. He had planned to travel through Russia, but was refused entrance by the authorities, and was arrested and deported as a spy while trying to work his way around Afghanistan. He doubled back through India and kept heading east through China, where he narrowly missed being stoned to death. Japan was more welcoming, and after pedaling 13,500 miles of since leaving California, Stevens rolled into Yokohama, then took a steamer on to the San Francisco Bay where his trip began.

Stevens published a two-volume account of his adventure, Around the World by Bicycle (1887), which was based on his letters to Harper's Magazine throughout the trip. It became an instant best-seller. He became a sought-after speaker and continued exploring and writing, famously tracking down the missing explorer Henry Morton Stanley in rural Africa, and riding 1,000 miles on horseback through pre-revolutionary Russia, where he interviewed Leo Tolstoy, for his 1891 book, Through Russia on a Mustang." 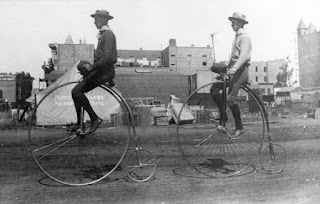