A bike made of cars

I've stumbled across another cool (if somehow hipstery) video. This is a bike made out of junked cars. There's a lovely sort of metaphor in that. Also, blowtorches are cool.

It's that magical time...

When potholes spring up out of nowhere! Like daisies! Or possibly fungus!

But to bring a little joy into a pothole-ridden day, I have just discovered a total gem of the Interweb: there is a website called www.pothole.info. There really is. I found it because I wanted to look up something on how potholes form (because it seems to me like they're worse on higher-speed roads and I was looking for some sort of explanation for that). Go. Click it. It's really entertainingly written.

Anyway, the pothole report from here: there are days when I feel, as I turn in to my driveway, that just getting home unharmed was an achievement for the day. And I feel a little badass as I put on the brakes in front of my door and pick the bike up to bring it inside... that's right, I just made it home. UNINJURED. What have you done recently?

I was on the way home today and ran into this nightmare: this is on the way south on Bank, near the intersection with Randall, I think. The problem here is the high snowbanks on the side of the road which eat the bike lane (while it lasts) and then do a quick duck further into traffic where the bike lane ends. By the time you've made it through all that, you're a little sketched about the speeding cars on your left. And you're climbing a hill. Then you encounter this: 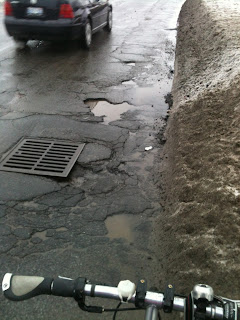 The thing about potholes of the size and grandeur of Bank and Heron potholes is, at least they push you to take up space. It's scary to get out there into the lane when you can hear the cars coming up behind you, and I have to remind myself over and over that I'm actually safer with my tires a metre or so out from the edge, rather than hugging the side, taking up as little space as possible, the Apologetic Cyclist. "Nuts to that! Take up space!" I tell myself. But it's really hard to actually do. It's so easy to hear the car coming up behind you at speed, and cringe sideways. And every time I do, and the car passes close to me and I flinch, I'm actually madder at myself for cringing than at the car for buzzing me.  . .

Anyway. There are spots on Heron that sort of force you to merge left, or face disaster. Like this: 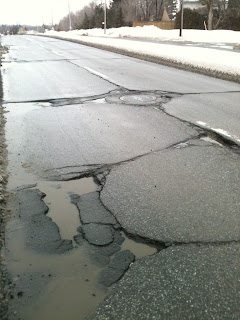 I mean, it's almost magnificent. Just look at the sheer extent of it! I actually did have to ride (slowly, and standing on the pedals) through that mess on the left, because there was double-barreled traffic coming by and I couldn't swerve into the lane. Slammed on the brakes instead. I'm happy I ride a mountain bike.

There's also this one, just in front of Saint Patrick High School, which has been there a while. It's almost an axle-breaker, and I know that a couple of weeks ago, while I was walking past, I got drenched when a car went over it: 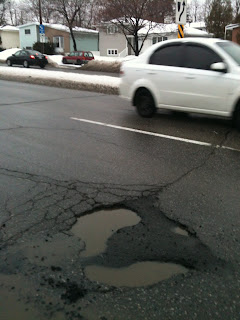 I'm going to have to break out my Pothole Rating System (TM) soon, I think. It's only going to get more interesting.

The thing is, like I just said about them forcing you to take the lane, they do kick your awareness, and your bravery, up a notch. Potholes make you ride more skilfully. In case you're looking for a silver lining to that late-winter-early-spring-riding cloud.
Posted by Kate (and Mike) at 2:07 PM 2 comments: