It was a gorgeous day to bike downtown to work today. Not even the scary (super-scary) potholes on Heron could dampen my spirits. And because one of my jobs has meant I get to bike to work less (it's 40 km from my place: not really manageable by bike) I treasure the days I get to ride even more.

On my In Town and Out interview this week I talked about commuting by bike, but I never feel like I've really gotten across why it's so darn good. This, though, was posted by a friend on Facebook the day after the interview, and I think it sums things up pretty well: 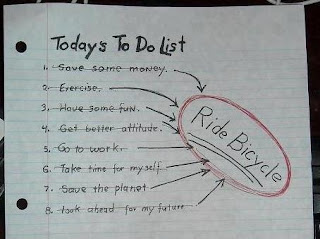 Giacomo asked me, in the In Town and Out interview, about how I got started riding, and in ten seconds or so I tried to say something about that. But it's hard to be clear when you're thinking on your feet in front of a microphone, and I think it bears saying again that I didn't do it to save the world or to be an athlete. I will admit that a part of my decision to see if I could actually bike to work every day was based on the fact that I had recently gotten back into rock climbing, and thought that pretty much anything that made me stronger, faster, or built up my endurance would be good for my climbing game. But more important was the fact that if I biked the 7 or 8 miles to and from work each day, I didn't have to buy a $90 monthly bus pass. I didn't have a car: it was bus, transit or beg a ride for anything I wanted to go to. And I was broke and trying to save money.

And as I mentioned in the interview, I quickly discovered that what had been an hour and fifteen minute bus ride, on average, was a 35-40 minute bike ride. I started out by telling myself there was no option: ride or nothing. Because it was actually faster to bike, that was easy: if I dawdled in the morning, as I was very likely to do, eventually my only choice would be to ride, because I'd missed the bus I needed. My own habits helped me out, there. After a while, I forgot that bussing - anywhere - was even an option.

And I arrived at work so much more awake and alive. Sure, I might arrive ranting about an idiot who'd cut me off on Montreal Road or blazed past me on Bank, but I had also been able to spend 40 minutes of my morning pedaling along, checking out the sunshine and the wildlife along the Rideau River, getting my pulse up, listening to some tunes in one ear, doing some thinking and organizing and planning in my head, and bringing my heartrate up a little. After a while, I started riding in the rain, too, once I had rain gear. And then after a year or two, I stopped turning in the bike and standing in line for the bus pass in October or November, and started riding through the winter. And discovered how much fun a quiet cold street can be in January when you're the only cyclist you've seen all night. Frozen dry pavement and a scarf covered in built-up frozen breath can be fun too. Even riding back from a night out with friends through a driving ice storm.

Giacomo asked about people worrying about not looking 'cool' if they don't have all the road-bike gear, and I wish I'd said that most of the time, the coolest I feel is when I come rolling up to my apartment building at the end of the day, swing off, and pick my bike up to carry it up the stairs to the lobby. Sure, Mike's a cheap, second- or third- or maybe fourth-hand beater, but that's actually pretty cool in itself. That's how I roll: on a beat-up old mountain bike. Pretty much every time I pull up at my building and get off, I feel badass. Rain, shine, snow, sleet, good traffic, bad traffic, whatever: when I hit the brakes at the end of my trip, I think, "yeah, that's the establishing shot for the next scene in the movie someone's filming of my life."

And also, everyone has a different sense of "cool." My own sense has changed over the years I've been riding. All sorts of cyclists strike me as "cool" now. This afternoon I cruised through the south end of Centretown behind a girl with short hair, a messenger bag, high handlebars, a straight-backed posture, fully tattooed calves, and a music player mounted on her bike playing "Love Will Tear Us Apart." I had to pull up and hit the brakes behind her for a while because she was slower than me, but I didn't mind one bit. She was cool. 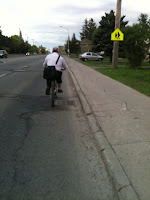 A little later on, I found myself behind a grey-haired, balding and bearded man with his seat too low, in a suit, on a hybrid, rolling down a main artery. He was cool too. Someone at Billings Bridge had parked a mid-range road bike in black and acid green. That was cool. Someone downtown this morning had a bike with one of those curved metal fenders strapped, for some reason, to the top tube. Also cool. I think freaky cargo bikes are cool, and collapsible folding bikes. I think single-speed cruisers are cool, and trial bikes, and super hardcore mountain bikes, and ultrasleek road bikes. I even think STOOPIDTALL is cool, although it scares the crap out of me. And check this adorable Twitter pic.

So I suppose what I think is cool is that bikes can be an extension of your own style, and an extension of your life. Lots of things about my life have changed because I ride, sure, but  I also feel like the way I ride has developed because of who I am. And sunny early summer days like this one get me kind of effusive about the whole thing.
Posted by Kate (and Mike) at 9:04 PM 1 comment:

Just a quick note: I'll be appearing on CBC Radio's In Town and Out tomorrow (Saturday) at 8:15 am, talking about Bike to Work Month with Giacomo Panico, who I'm happy to get to meet IRL (there are so many people I know from the online community that I haven't actually met in the real world.) I'll post the link here when the interview's online sometime tomorrow. For now, In Town and Out's page is here.
Posted by Kate (and Mike) at 10:10 AM 1 comment: