Been snowing for a couple of days now.

So when I looked outside this morning and saw that it had been snowing all night, I could barely see the highrises a block away, the streets were white and people were walking in them because the sidewalks were too full of snow, I admit I had a moment of indecision. Maybe I should take the bus to work. 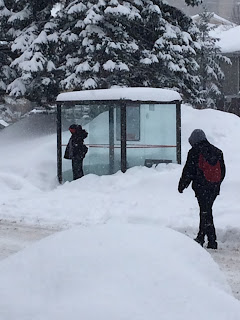 So I stood, looking out the window, dithering, for a while. Thought processes something like this:

My small residential street always looks worse than the rest of the commute.

But the bike lanes were pretty hard going yesterday. And Old Ottawa South is always so shitty.

But you've biked in worse.

But it's never as bad as you think it's going to be.

Look, you're already late because it's taking you so long to decide.

And it's still snowing, so maybe it'll be really terrible trying to get home.

And you've ridden in worse.

But if Heron Road is full of snow it'll be awful, and they won't have plowed the back streets you use to avoid it.

You might get to work exhausted from fighting skids for 9 km. And you'll be late, because you're already late.

Maybe you should just take the bus. No one will blame you.

(Maybe you should just call in sick and avoid this whole decision. Nah. That wouldn't fly.)

But you always ride. You ride in everything. It's kind of a point of pride.

But it's silly to put yourself in danger over your pride.

So I left my gaiters on the boot rack, grabbed my keys and some change for the bus, and went outside. It was still snowing, little tiny flakes, and there was no pavement to be seen. I joined the flock of people standing at the bus stop, all staring silently, in resignation, down the street toward the corner where the bus should appear. The crowd at the stop was not reassuring. And as I stood there, slowly getting chilled by the wind even though it was only about five below, staring down the street looking for a bus that didn't come, I thought to myself, "Well, this is stupid." There was snow on the pavement, yeah. So what? It was warmish, the snow looked to be letting up, and I was really, really sick of waiting for the bus.

So I went back up to my apartment, and got my bike. When I got back down to the street, the crowd was still waiting at the bus stop. I walked out into the street, put my tires down in the wheel rut, swung a leg over, and pedaled off. Sayonara, suckers.

And discovered I had chosen wisely: the ride was hella fun. I took the back streets through the Pleasant Park neighbourhood - a little skiddish, but since there was no traffic, not a problem - and caught Bank Street at Kilborn, where the tire tracks were strips of bare pavement between ridges of snow several inches high. The bonus? If there are massive ridges of snow demarcating your tracks, drivers tend to stay in their lanes, which means they have to change lanes to pass a cyclist. Score! I beetled down a normally sketchy road, securely claiming the whole damn lane.

The snow was light and fluffy enough that it was relatively easy to cut through. A good thing, because in Old Ottawa South, where the outside lane is usually full of castoff snow, I could just ride along through it, sticking to where it was a little less deep. The parking ban was still in effect, so I had far fewer parked cars to swerve around, and I even blew past the bumper-to-bumper line of cars up the hill. I may actually have sung "la la la la la suckers" out loud as I passed them.

I microcorrected my way down the super snowy street on O'Connor, where the ruts were as spectacular as I've ever seen them - the exact width of a car tire, with sheer sides that were inches high. In some places my boots hit the snow at the edge of the rut on the downstroke.

The O'Connor bike lane past the Queensway appeared not to have seen a plow in hours, but the snow was mostly still easy to cut through. I blasted through ridges plowed up across it at the intersections that were sometimes up over my pedals. At Laurier the lane was a few centimetres deep in snow - looked to have been plowed even less recently than Laurier - but, again, it was not all that bad to cut through.

By now the sun was breaking through the clouds and the snow had stopped and I was grinning.

What was I even thinking, standing in transit limbo at that bus stop, staring up the street? How did I forget that I never, ever regret taking the bike instead?