On the way back from the office, I stopped to take a picture of the construction site, because I had the camera handy (I'd just been doing some photography for the Centretown BUZZ.) The pylons were all still there and the same woman was even standing there with her sign. 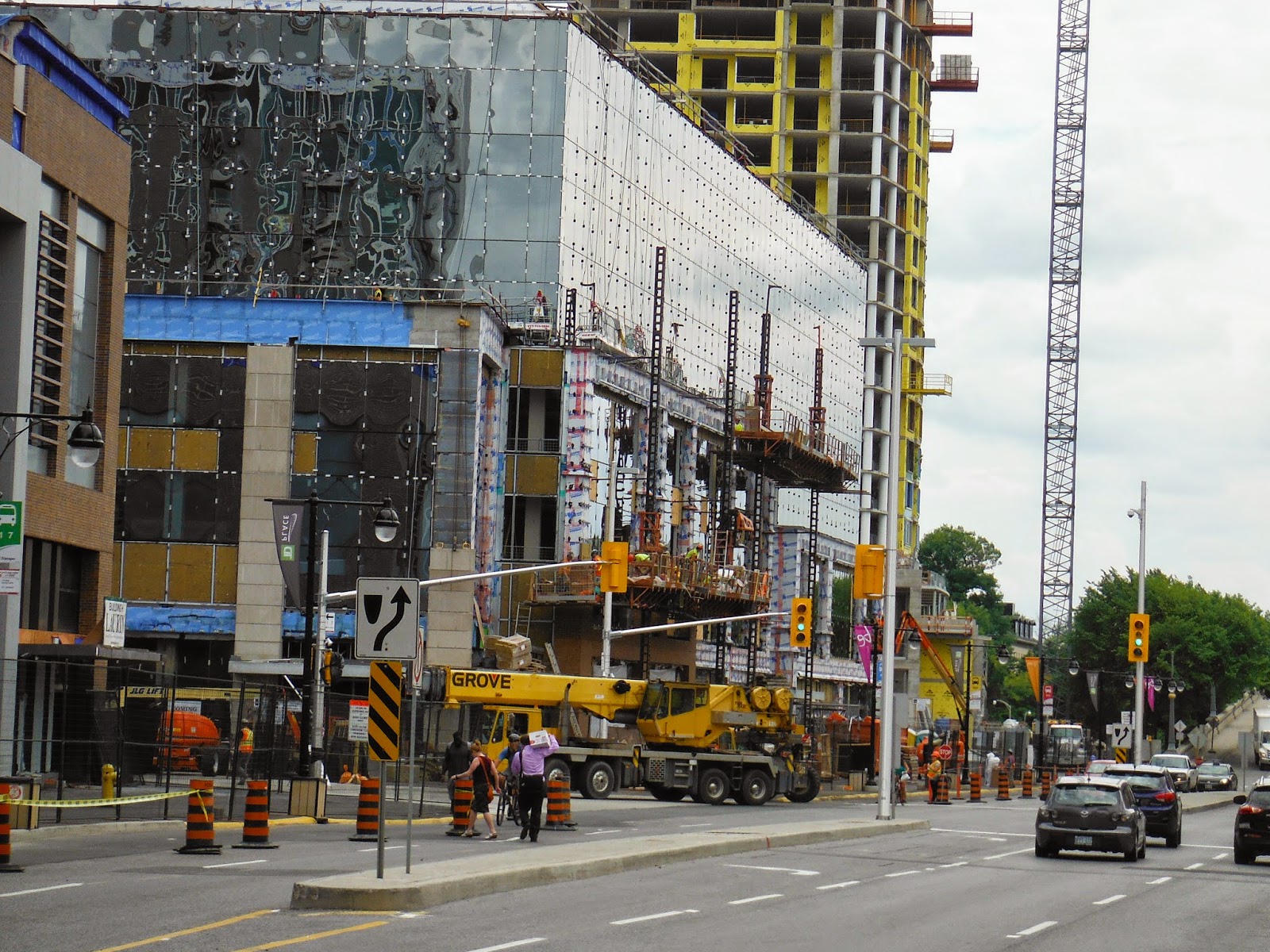 It's your general construction chaos zone. 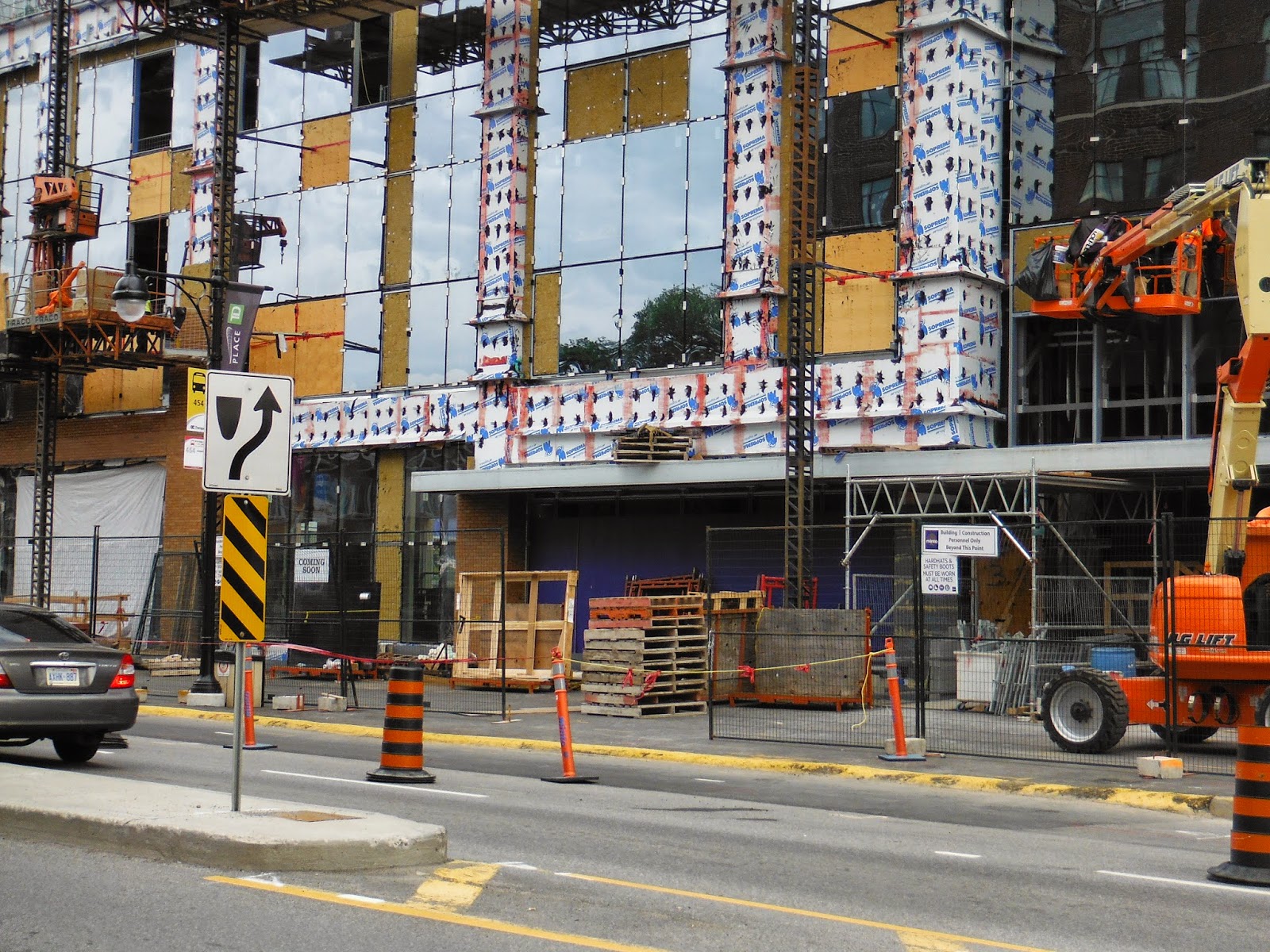 But look! Look there in the middle!. . . someone actually tied little flags onto the rope, just like I suggested! (And if I'm seeing it right, they moved the poles holding the rope a little further toward the curb so the area where you can't ride isn't right in front of you coming off the bridge, giving bikes a bit more room between the cordon and the cars.) 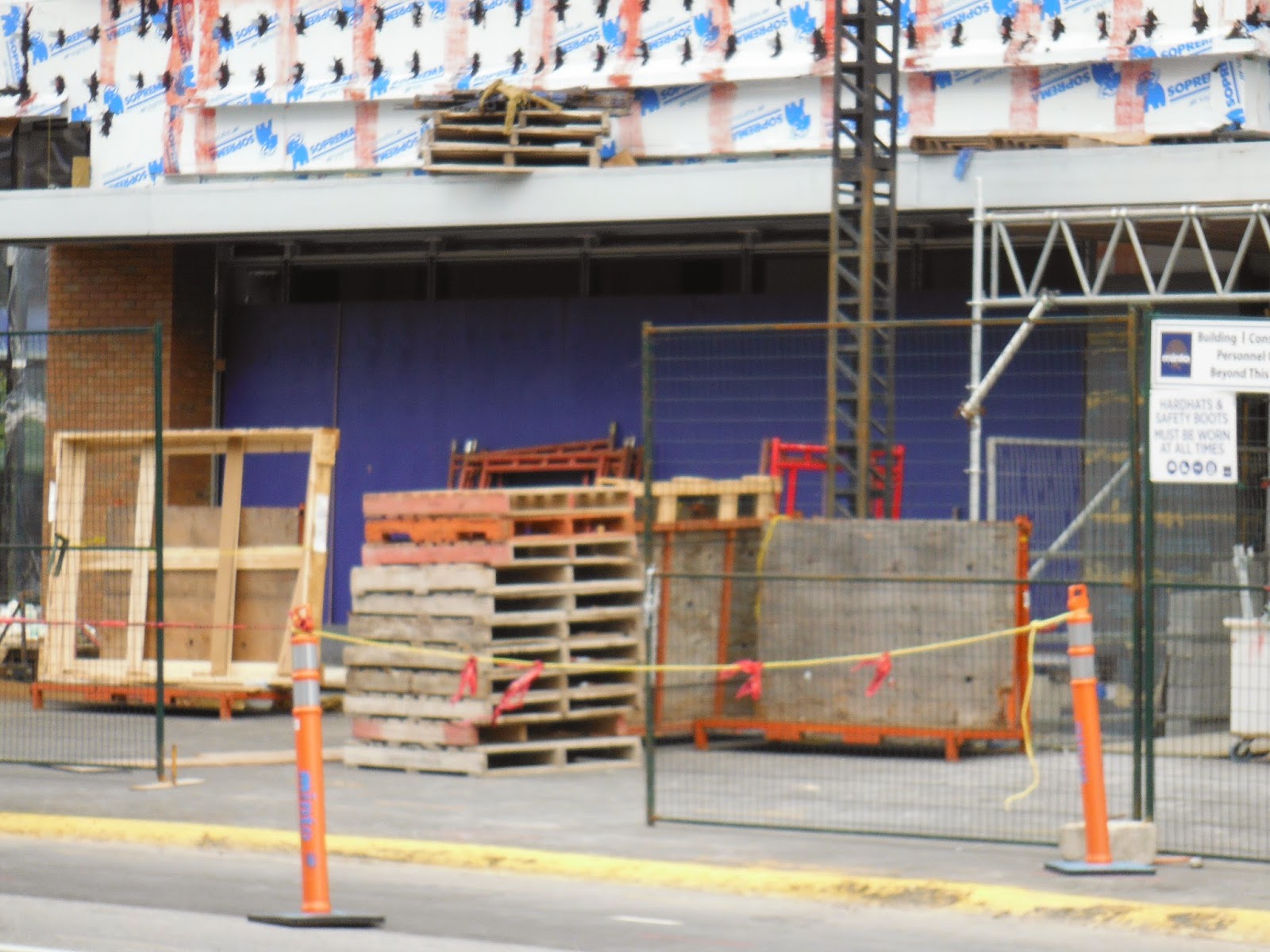 So maybe the woman I talked to wasn't actually as dismissive as I thought she was. Or maybe some other cyclist had the same problem after I did, and they realized it really was an issue. I don't know. But: hooray, steps were taken to make it safer for us cyclists!
Posted by Kathryn Hunt at 11:53 AM No comments:

There was a brief shining moment there when both lanes of the bridge at Lansdowne, and the road in front of the big shiny new Lansdowne Park, were open. No lanes closed, no pylons, no construction workers.

That brief shining moment coincided with the launch of the Redblacks and the football season. It was wonderful. I crossed the bridge without fear or stress: I didn't have to worry about jockeying for space in a single lane, drivers who would try to pass me, or choking construction dust.

Today, though, on my way downtown, I got to the top of the hill in Old Ottawa South, and thought to myself, "ah, dangit, not again." The pylons were back: the northbound lanes were down to one; the lefthand, centre lane  was blocked off.

But, then the lane closure got complicated. There were pylons all over, blocking the right hand lane this time, and a construction worker with a "slow" sign diverting traffic into the middle lane. I was following another cyclist, and we both came down the other side of the bridge at a decent clip, passed the sign holder on the right, and rolled along a stretch of pavement between lines of pylons. Then I saw the guy ahead of me swerve sharply, like he'd lost control, and slam on the brakes. I hit my brakes too, and then saw that he'd run straight into a length of yellow rope strung between two pylons to block off that section of the road. It had been caught up on his front wheel and a section was wrapped up under the fork.

He untangled it, then lifted the rope so I could get under, but I looked ahead and saw that there was a length of tape closing off the other end of that section of the lane, so we went around, on the inside. At the far end, I stopped to talk to a worker standing near the far barrier. "Have you had any cyclists crash back there?" I asked her.

"No," she said, "it's kind of obvious you're not supposed to go there." (She sounded pretty confrontational about that.)

"I don't see how they would know that," I said, "it wasn't at all clear to me that you couldn't go that side."

"Well, I didn't build it," she said, dismissively. "But you're not supposed to go there. It's there because the trucks need to get in to access the site."

"I'm just saying it could have been a lot more clear," I said. "And cyclists are usually going to try to stay out of sharing a single lane with cars in a construction site, so it's just natural for us to go in where there's less risk. That rope across there really isn't visible. I didn't see it at all until that guy hit it. You could make it more obvious with some bright tape, or maybe just some flags along the rope."

And she made some "mm-hm, yep, thank you," noises which clearly indicated to me that she was just waiting for me to shut up and go away. Which I did. Wishing that she'd seen why I was so concerned. Why that length of rope was a hazard. Wishing that she gave a crap whether cyclists were safe (and pretty sure she didn't, and wouldn't say anything to anyone about my concern.)

I know that when I can, in a construction site, I'll get myself out of the pinch point where the cars are being diverted into a narrow lane because the drivers might be confused or distracted by the signage, the pylons, the directions, the people waving flags at them to tell them where to go: and I'm pretty distracted by all of that too. Trying to change lanes, negotiate cars, and worry about whether an impatient or inattentive driver is going to blow past some marker or other, is pretty stressful. So, if I see something that looks like a clear space away from the cars, I'll naturally head for it.

If the entrance to that section of the lane had been blocked with bright tape, I and the other guy would have seen it, and we'd have gone around. But that stretch of plastic yellow rope didn't cut it - and could have caused a really serious accident. That cyclist in front of me reacted only just in time: he ran into the rope and got it caught up on his bike. Luckily, he didn't go over.

I'm not sure if there are any rules about how traffic diversions need to be signaled and marked, and if this would count as a violation, but I think I'm going to write to the City about it anyway.

And yearn for the day when there are no longer any pylons, or lane closures, or ripped-up sections of road, or confusing signs, or dump trucks backing up, or blowing clouds of grit and tar fumes, in front of that park. Because it's on my commute, and I'm utterly sick of dealing with it.
Posted by Kathryn Hunt at 8:40 AM No comments: