Funny how I can ride through the same intersection every morning and evening, and not notice that someone is building a segregated bike lane on it until it's been underway for a week. . . 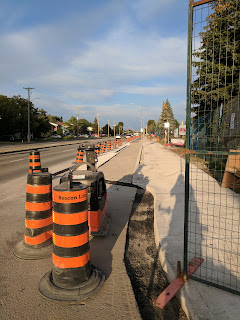 This is - or will be - the Heron Road bike lane. It's essentially a rebuild of the "kill strip" along the south side of the road, between Colbert Crescent and the Heron Gate Mall. It's something the Healthy Transportation Coalition and I spotted last summer and started making noise about to the city (and the ward councillor gave us credit for bringing it to his attention!).

I think it's probably also happening in part because Heron is being dug up and resurfaced just west of here, and in part because the area just beside Sandalwood Park - formerly row houses - has been bulldozed and is being redeveloped for mid-rise housing. (I'm willing to bet that the developer understands the increased curb appeal of cycletracks and appealing sidewalks.)

I wrote about this project when the public consultation happened back in April. And at the time I mentioned the misgivings that I still have: while it is amazing to hear the words "Heron Road" and "cycletrack" sharing a sentence, this particular build is only about 800 metres long, it doesn't connect to any other infrastructure (such as the bike lanes that already exist a few hundred metres to either end, on Alta Vista and Conroy) or even run as far as Saint Patrick High School, and it only runs on one side of the road. This is because on the other side of the road, and at other points on this side, the existing space where the track could run is punctuated by hydro poles, which would be expensive to move. So this lane is a great step, but it doesn't really solve Heron Gate's isolation problem. 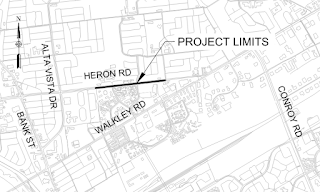 However: I honestly did not believe construction would start this summer. I'm so used to four-year timelines. This is going in a scant five months after the consultation phase. And watching it go up I'm reminded of David Reevely's article about how it's actually cheaper to build roads with cycletracks than without. As long as they're rebuilding any road, cycle tracks should go in. 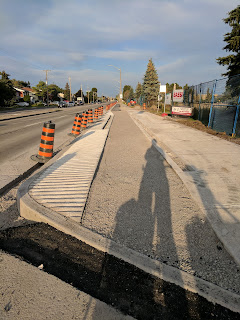 And riding by it tonight, I realized how much nicer the street already looks with a cycletrack on it. More liveable. Less forbidding. More like a place for people. Even if it's fenced off and full of traffic cones and still mostly gravel and raw cement. Even if it's less than a kilometre and doesn't go anywhere, this lane looks pretty damn good.

So now, the fun begins. Now we have to make a whole lot of noise to get this lane connected to other infrastructure, and expanded to the other side of the road. We have to convince the City to suck it up and move the damn hydro poles to make this stub of a bike lane into what it could be. This 800m project is low hanging fruit, yes. And the worst outcome would be this: no one rides on it because it doesn't really go anywhere, and people point to the lack of traffic to excuse doing nothing more. Once this lane is open for bike traffic, we need to start writing to the City, to the project manager, Jamie MacDonald, and to Councillor Cloutier, to explain why it needs to be connected to the network.
Posted by Kathryn Hunt at 6:52 PM No comments:

There are things drivers do that aren't really all that dangerous per se, but that have started to pull the quick release on my pet-peeve reaction. One is nudging into turns through intersections while there are pedestrians crossing, crowding and bullying them as they cross with the light.

Another is drivers who move out around me when I'm stopped at a red light so they can turn right.

I know it's not all that dangerous for them to do this: I'm stopped, I'm usually over at the side of the road with a foot on the curb. And in this particular case above, there are some weird, confounding factors, like the angle of the intersecting street and how far back the stop line is from the corner and how wide and quiet the street is.

But it's not actually legal. And at a couple of streets on my usual ride to and from downtown, I stop in the middle of the lane, because the street is narrow, because of where I need to be on the other side of the intersection, whatever. And I get honks, I get yelled at, and a lot of the time, I get people pulling out around me, sometimes into the left-only lane, to turn right around me. Sometimes they stop first and then inch around me. Sometimes they just cruise right past me on their way through the turn, and that's when I worry about it being dangerous, because if they're looking left for oncoming traffic, they can't be paying attention to where their passenger side mirror, or front tire, is in relation to me.

But like I said, most of the time it's not all that dangerous. I mentally shrug and sigh.

The other day, though, someone did it, and then I realized it was a driving school car. With an instructor in the passenger side seat. And our encounter went a little something like this:


It wouldn't have bothered me nearly as much if it hadn't been an instructor, obviously teaching his student that it's just fine to cut around a cyclist, and to ignore the cyclist's concerns when she points out that what he's doing is illegal.

And it's consequence-free. No one is about to pull anyone over for doing this. There are bigger fish to fry. But it touches off that pet-peeve reaction of mine that someone whose job is, theoretically, to be a stickler for the fine points of the law (I was failed on my first driver's test for leaving the clutch in through a turn) is so blasé about it.

Also, I don't think this is the first time I've had a less-than-stellar encounter with Jim's Driving School: maybe even with that particular instructor. . .
Posted by Kathryn Hunt at 1:32 PM 1 comment: