This morning was the tribute ride for Danielle Naçu, the cyclist who was killed last week when she was hit by an opening car door and thrown into traffic. I was expecting a crowd: I certainly wasn't expecting the hundreds that showed up. One policeman I spoke to afterward said he thought there were about 500 people walking or riding down Queen Street (where Danielle was killed); the folks at Spacing Ottawa think they counted more like 700 (in this video of the ride setting off from Bronson and Queen.)

I was somewhere toward the front end of the group, by virtue of having been inside at the Christ Church Cathedral hall till nearly ride time: they'd opened the hall and brought out coffee and muffins for the riders, and my friend Steve was there volunteering, so I popped in for a cup of coffee and to give him a hug.

The ride set off a bit after nine, led by Danielle's family, her brother carrying a huge bunch of yellow balloons. From the 'dozens' predicted on CBC Radio that morning, we were already up to hundreds and more joined the ride along the way. (CBC's Ottawa Morning show was playing an update about the ride every half hour from about 7:00 AM this morning, and correspondent Giacomo Panico was at the starting point by 8:00, about half an hour before I got there.)

The weather stayed lovely: about 10 degrees, with the sun trying to break through and very little wind. I was riding alongside my friend Kevin, trying to remember how to ride that slowly - I caught on after a block or so. Hundreds of bike bells ringing meant we rode along in a bubble of chiming sounds. People stopped at the side of the street in respect, or took pictures of the stream of cyclists and walkers. We wound to a halt at the ghost bike installed on the north side of Queen, where Danielle died, and Danielle's brother Brent climbed up onto the bike (which was already nearly buried in flowers) to speak to the crowd, and everyone burst into applause (and the ringing of bike bells.) 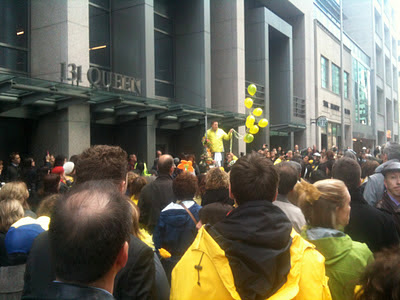 That was when I started getting choked up. He released the balloons he was holding, and we all watched them drift up and away. Then Brent thanked everyone for being there, talked about Danielle's love of the city, and said that it was the support and warmth of people in Ottawa that had been helping them get through. 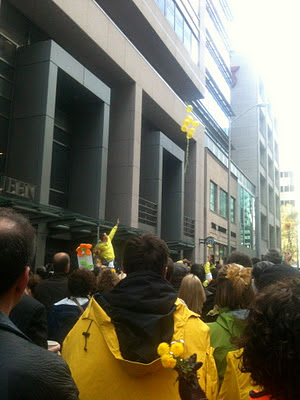 Sam McGavin, who had organized the ride, was a tiny woman, who was lifted up onto Brent's shoulders so she could speak to the crowd as well. She said that she heard about Danielle's accident when her partner called her, frantic to know if she was all right, and that it was probably the same for a lot of us. "For a day, we didn't know who she was," she said, "only that one of us had died, and it could have been a friend, or a sister, or a girlfriend, or a mother, or a daughter." She called on everyone to share the road, and on the city planners to take cycling into account when they design roads, build public spaces, and plan streets, and told everyone to be cautious - "not afraid," she said, "but cautious and aware." 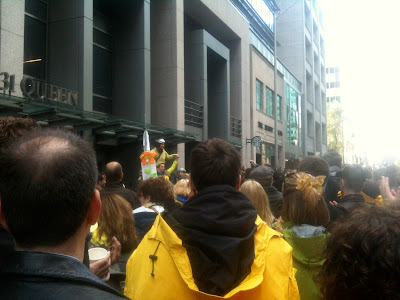 Looking around, I was amazed at the size of the crowd. It stretched back at least a block, probably more. 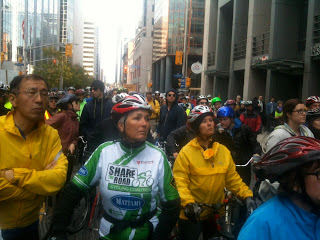 After Sam stepped down, the crowd slowly dispersed, with a number of people waiting to place flowers that they'd brought on the already buried ghost bike, and the media interviewing a few people, as well as the Naçu family. I stayed for a moment, not wanting to simply ride away, and then, of course, I did: down blocked-off Queen Street and onto Bank, where all the cars and bikes were rolling along as usual, but, I imagined, a little more somberly.

Tomorrow morning at 9:00 AM, hundreds of cyclists and allies (non-cyclists are welcome to walk with the group) will be meeting at Bronson and Queen for a tribute ride for Danielle Naçu, the cyclist who was killed last week on Queen Street. Christ Church Cathedral, at Bronson and Queen, will be serving coffee from 8:00 AM, and supplying shelter in case of rain. Anyone participating is encouraged to wear yellow if possible, as a symbol of the ‘ray of sunshine’ that Danielle was to those who knew her. The ride/walk will travel up Queen Street with a police escort (also on bikes), stopping at the ‘ghost bike’ installed at the place where Danielle was struck. The flowers from the funeral home are due to be moved to the ghost bike tonight: if the number of flowers piled on the bike two days ago are any indication, the bike should be completely buried by tomorrow morning. Members of her family will speak, and other members of the cycling community are welcome to say a few words, regardless of whether they knew her.

And thanks to Spacing Ottawa, here's a gorgeous little piece by Belfast journalist Malachi O'Doherty, who I had the real pleasure of meeting a few years ago at the Writers Festival: worth watching, in memory of any cyclist killed on the roads.
Posted by Kate (and Mike) at 1:52 PM No comments:

... that drivers should give cyclists a little elbow room:

Sometimes there are surprises. Like large chunks of inexplicable concrete sitting there at the edge of the road. 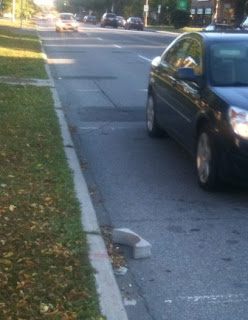 This was on Main Street, in front of Saint Paul's University, where, believe it or not, a cyclist often finds herself squished that close to the curb (it's a narrow, fast street with a serious pothole problem.) I'm baffled. And glad I had space to swerve. And considering starting a catalog of the odd things I've had to swerve to avoid.
Posted by Kate (and Mike) at 7:31 PM 3 comments: