I was running a little later than usual on the way home from work this evening, and it was raining steadily as I pedaled along the canal. At the Clegg crossing, I turned and stopped over the signal loop dots as usual. I had noticed, as I rode up to the crossing, the flashing lights of a police motorcycle further down Colonel By, and while I waited for the light, he pulled up, parked in the middle of the intersection, and stopped traffic coming onto Colonel By from Clegg.

"You'll have to wait a few minutes," he called to me. I said okay, and resigned myself to standing in the drizzle for a bit, straddling my bike. The cop started waving traffic along Colonel By, heading toward Bank. There was no traffic in the other direction.

Another, older woman pulled up on her bike, and the cop told her she'd have to wait a few minutes. "What's going on?" she asked me.

"No idea," I said. A phalanx of police motorcycles, lights flashing, streaked toward downtown. "Maybe it's the Italian president?"

"What did your app tell you? Mine said it was supposed to stop raining by now. Teach me to believe it."

Another cyclist showed up, and was warned to stop. "Can't we just - go? Like, when it's open?" he asked.

"I wouldn't recommend it," I said, "the cop is right there." Another group of bikes streaked past. They kept coming by in squads, at fairly high speeds.

"I was only ever in a motorcade once," said the lady who'd come up behind me, "and I hated it. It was in Shanghai, and I was a complete nobody, but I was in this motorcade. They shut the whole city down, and to be honest I was just embarrassed by it. I guess they're used to it because it happens all the time in Shanghai, but I was just so Canadian about it. You know, I just wanted to apologize for blocking up traffic."

At this point there were four or five of us on bikes, in the rain, standing at the corner. "Hey," I called to the cop, in a break between the groups of motorcycles. "What's up?"

"Charles," he said, and went back to waving cars along to clear the road.

"What, Prince Charles?" asked the guy next to me, in a fake British accent.

"He's the oldest one," she said. "Of Elizabeth's kids. Princess Di's former husband."

"So we'll know him if we see him," said the lady. "Although, we won't see them, it's not like they'll have their windows down in this rain. Still, I guess that's something. Worth getting soaked here in the rain for, right?"

The road was cleared at this point. "Wait," the lady said, "here they come, I can see the lights..."

So we stood there as the motorcade of black cars rolled towards us. "Should we wave?" someone said,

"We should definitely wave," said someone else. "Welcome to Ottawa, here's a bunch of drenched cyclists to greet you."

So we waved. And as the cars rolled by, the window rolled down on one of them, and HRH Charles, Prince of Wales waved at the four or five soggy cyclists standing at the crosswalk, who'd been randomly stopped on their way home to let him go by.

There was a small squeal of surprise from the lady, and a couple of the other cyclists, and we all pretty much burst into laughter. "Well, that was pretty much worth it," someone said, "front row seats." The motorcade passed, and the cop in the intersection drove off, and the regular flow of traffic resumed. At our green light, we got moving again.

"I can't believe he actually rolled the window down," said the lady. "That's something. What a welcome to Ottawa, a bunch of people on bikes in the rain." She was laughing.

"Nice meeting you all," said someone.

As we filtered through the bollards and onto Echo or Clegg, I could still hear the older lady laughing to herself.
Posted by Kathryn Hunt at 5:14 PM 1 comment:

Two hundred years ago today, a German inventor, Baron Karl von Drais, took his newly created "laufmaschine" for a spin in Mannheim.It was essentially the same basic machine as my nephew's balance bike - two wheels, a seat and handlebars, powered by a running motion, as you pushed yourself along with your feet. 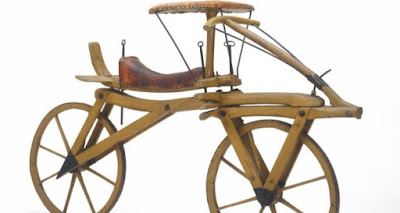 True, it would take about 60 years from that day before the full bicycle craze would kick in, with all the penny farthings and safety bicycles and world-circling adventurers that it brought. But that goofy-looking balance bike, the first "dandy horse," was on the cobblestones of Mannheim two hundred years ago today.

For a while, the bicycle was a toy, ridden by mostly young and male enthusiasts, a mark of modernity, athleticism, and a dash of recklessness.

But once they started creating safer and more comfortable versions of the bicycle, it started being seen as the solution to transportation for average people. Horses were expensive to own and keep: the bike offered individual mobility at a fairly reasonable price. The celebrity world-travelers (like Annie Londonderry, Frank Lenz or William Sachtleben) were, in part, saying that a person could go anywhere at all on a bike - even across the Himalayas or the Gobi Desert - given a little grit and ingenuity. All on their own.

I don't think von Drais had any idea of the impact his invention would have, though. Bikes are directly linked to the emancipation of women, largely because they're a means of getting around that's affordable and accessible: they quite literally offer freedom. They still work to improve lives in developing countries where they're the backbones of small-town entrepreneurship and service delivery. And for a long time, learning to ride a bicycle was one of a child's first moments of independence.

(I remember being envious of my friends who could ride and had bikes, and the joy of getting my first bicycle as a birthday present, and waking up really, really early in the morning the next day so I could ride down the hill behind my house over and over, crashing in the back field until I learned how to ride it.)

Bikes were the vehicle of the future: until the invention of the car, and Henry Ford's determination to make car ownership affordable for the maximum number of Americans, and the explosion of car culture. And for a long time bikes were relegated back to being toys. Children rode them, and then gave them up for cars when they put away childish things. You weren't really an adult until you had a car. Suburbs and drive-ins and drive-throughs and freeways sprouted.

And now, congestion is awful, everyone hates commuting, Western civilization is discovering that it's sedentary and unhealthy, we've learned that burning hydrocarbons will destroy our climate, gas prices are shooting higher as we get closer to peak oil, we've learned that widening highways only leads to bigger and more clogged highways, and cities are, one by one, coming around to the understanding that bikes are, actually, like we thought in 1890. . .

Bike networks crisscross New York City (and Times Square is closed to cars). Cities like Amsterdam and Oulu and Copenhagen - well, we know about them. Even Detroit, Motor City, is putting in bike lanes on every new street that goes in as the downtown core is being rebuilt after economic and industrial devastation. Bike and transit oriented design is being embraced by city after city. I live in a city with the third fastest growing cycling modal share in the world. In the afternoon, on the way home from work, on the segregated bike lanes, I stop at intersections to wait for the light along with a dozen other cyclists - probably more people than are in cars waiting for the same light, if I'm going to be honest. Millennials, in increasing numbers, are just not bothering with car ownership. Cargo bikes and longtails and two-seaters are proliferating, as families rediscover that you don't necessarily need a car if you have kids. There are battery-powered bikes for the less physically strong, and recumbent bikes for people with back pain, There are trikes for those who feel less stable on two wheels but still want to get around cheaply and easily and without having to worry about finding parking.

And bikes are still affordable and egalitarian. There's a guy I ride past many mornings, who puts out his bedroll underneath Pretoria Bridge, at the side of the bike path. He parks his bike beside the flat space of concrete at the canal railing where he spends the night, and in the mornings he packs up his things into his panniers: I've passed him while he's still sleeping on my way to work, and I've passed him getting packed up for the day when it's better weather and he's up earlier. I've passed him late at night when he's already turned in, with his sleeping bag zipped up to his neck. I presume he's homeless, or otherwise marginally housed. He has a bike: it's in decent shape, and it gets him and his stuff around town.

And riding a bike will make you see things differently. At least it has for me. It has made me braver and bolder and less likely to take any shit from some idiot in a car who feels more powerful than me. And it has changed my life. Since getting back on a bike as a primary means of transport a little over ten years ago, I've learned a lot, I've discovered a passion, I've gotten more involved in my city, I've met wonderful people, and I've been involved in some efforts to make the world a better place. Not to mention I get to say that getting from point A to point B is sometimes the best part of my day.

So happy 200th birthday, bicycle. I think you've changed the world, and I don't think you're done changing it yet. And I'm terribly glad you're part of my life. 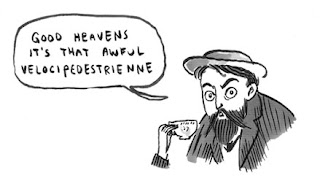