No but really, this spring has taken so very, very long to get going that this morning, cyclists in Ottawa (mostly winter cyclists who no longer feel alone) were deliriously describing to each other how many other bikes they'd seen on the road on the way to work. There is actual green to be seen in the grass, if you look close, and the Riverside MUP might actually be clear of snow by now. It feels like cold, windy chains of bondage have been broken. Some of us might even have the courage to take our studded tires off this week.

And with spring come all those enthusiasm-building "Cycling New Year" events. Like Spring.Bike.Ottawa, which was the weekend before last, and which was really good: the theme was "Be Your Own Best Advocate" and the main event was a panel bringing together cycling advocates and representatives from the City and the NCC to talk about how best to get things done in the rather complicated political environment of Ottawa-Gatineau. We have two cities (Ottawa and Gatineau), two provinces (Ontario and Quebec), the National Capital Commission, which handles some aspects on both sides of the river, and the fact that we're a national capital, all having varying amounts of influence on decision making. It's enough to make an advocate's head spin. Weirdly enough, though, it seems to be working: at least, there are huge gains being made. 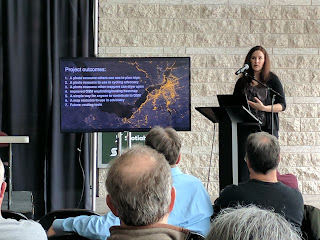 The other big reveal for Spring.Bike.Ottawa was Bike Ottawa's new interactive maps. These have been in the works a long time, and it was pretty cool to see the final result, as explained by Heather Shearer, Bike Ottawa's president, at the event.

Bike Ottawa's data group have taken a whole lot of street level data and crunched it all together into four different maps. One shows you the level of traffic stress (from 1, meaning fine for children, to 4, meaning even experienced cyclists would be uncomfortable) for every street in the city. Another allows you to put in your origin and destination points and select what level of traffic stress you're comfortable with. Then the map plots you a route, similar to Google Directions, that can get you to your destination comfortably (or maybe it can't: in which case you know where we need a safe cycling link, and you can start talking to your councillor about that.)

@BikeOttawa i used your maps to get to a place on bank st today. I was pretty worried bc i thought I had to bike on some super fast and busy roads but instead I got to bike on a really awesome pathway in nature that i had never heard of before! 10/10 great experience ty
— ivy (@ComradeIvy) April 23, 2018


The third map is an isochrone map, where you can pick a point anywhere in the city and see how far you can get in any direction, within a set range of times, and at a specific level of traffic stress. I find my neighbourhood enlightening here: If you want to travel at LTS 3, you can get far further, far easier, if you're going north. If you're going south there's a distinct border. Once you drop the stress level to 2, you are just not going south at all. Imagine the rail line at Ledbury as The Wall, and you're the wildlings.

The fourth map tracks the City's collision data and gives you a heatmap, which you can filter by collision type: involving pedestrians, cyclists, motor traffic, and "all." Grim, but useful. Also, those are all just the collisions reported to the City, which likely means most of them were fairly serious: lots of collisions go unreported unless someone gets hurt.

So, for the next round of spring events, I could go in armed. . .

This last weekend I led a workshop on sustainable transportation at Ecology Ottawa's Old Home Earth Day event. This is the second annual edition of this event, and it focuses mostly on people living in older homes (specifically in the Glebe and Centretown) who want to reduce their environmental impact.

To be honest, I wasn't entirely certain what my role was going to be, but as it turned out I was a sort of MC and main presenter. I was pretty happy I had the new maps to bring to this, because I figured I would be preaching to the choir on biking, more or less, and wanted to have something to bring people that they might not know and would probably be able to use.

So after an initial intro, and having Councillor Chenushenko get up to speak about optimizing modes of transit (essentially, use the mode that works best for you and the planet at that precise time), I got to do a 15-minute talk on why biking is awesome and how, if you're a bit nervous about cycling, these maps can be part of your toolkit to get out there and try it. I also talked a bit about the usual objections to cycling ("it's too far," "I have kids," "what about cargo?") and gave some options. The maps went over really well - I got questions during the talk about them and a couple of people wanted to talk to me after the workshop was over. We also heard from a Vrtucar user and someone from the Electric Vehicle Council of Ottawa.

And then I stepped outside and it was properly spring, and so I went the long way home, taking 25 km to get from the Glebe to Herongate, just because it was sunny, I was in a T-shirt, and I could.

Posted by Kathryn Hunt at 6:04 PM No comments:

Why Old Ottawa South is awful: a theory

I have a theory. This theory came to me after only my most recent encounter with a bullying driver on Bank Street between the canal and the Rideau River. The driver was in a silver Infiniti with a modified muffler.

This is, sadly, not all that uncommon on this stretch of street. It's about eleven blocks long, and I dread it most of the time. I have consistently had encounters with more more close-passing, horn-honking, finger-pointing, bullying drivers on this stretch than maybe anywhere else I ride.

But after this last one, I was struck by an observation. This eleven blocks is narrower, denser, and more full of visual friction than the stretch north of it, past Lansdowne Park, or south of it, over the river and past the Billings Bridge Mall.

Here's Bank Street north of the canal, by Lansdowne:


And here's Bank south of the Rideau River:

In between those two stretches of wide, open streets with two full lanes in each direction, large setbacks from the street, and longer blocks, there's Old Ottawa South - narrow, with buildings right up to the sidewalk, trees near the street, side streets intersecting on both sides, more buildings per block, more pedestrians, kids, bikes, you name it.

My theory is, drivers coming though this stretch aren't even aware of the stressing effect of the sudden appearance of parked cars, trees, storefronts, pedestrians, and patio furniture as they leave the drag-strip environments to the north and south of this neighbourhood. But suddenly, they're having to process more visual input. It makes them twitchy. They can't go as fast as they could a second ago (note: the speed limits don't change as you enter this neighbourhood, but speeds of 80 km/h on the Lansdowne Bridge or at Billings Bridge are not uncommon.) It all combines to make them, unconsciously, more aggressive. I see them bob and weave even around other drivers. Then there's a cyclist in The Middle Of My Goddamn Lane, and the impatience boils over into revving engines and near-miss passes to express frustration.

There you have it: the nastiness of Old Ottawa South, explained.

By no means am I saying that Bank in Old Ottawa South should be widened, the trees cut down, the parking lane given over to travel. No. Definitely not. If anything, I'm saying that on either side of it, where drivers get so much psychological permission to speed, we need to at least complicate their field of vision enough to slow them up. More trees, closer to the road; separated cycle tracks with barrier elements; narrower car lanes. Ease them into the denser neighbourhood, get their speed down, and maybe they won't be quite so edgy when they have to put the brakes on for a cyclist.
Posted by Kathryn Hunt at 12:46 PM 1 comment: