This goes in as Record #1 in my Gallery of Bike Lane Fail. I was on my way through downtown around 1:00 this afternoon when I came across this (at the intersection of Albert and O'Connor.) It was so pathetic a bike lane I had to stop and get a shot. Which took me about 30 seconds, during which time I was nearly clipped, twice, by people swinging across into the turn lane. (Granted, I was stopped, at the left side of the road.) 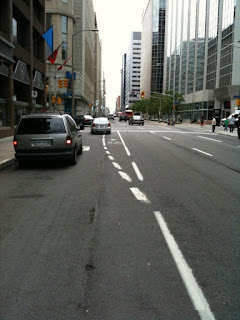 No, the lane does not continue past the intersection. Begging the question: What's the point of its existence at all, really? Does it ever feel, um, inadequate? Purposeless? Does it wake in the middle of the night wondering what it's doing, why it's here, and if it has a greater destiny that it's just, somehow, not fulfilling?
Posted by Kate (and Mike) at 4:03 PM 4 comments:

While I'm all for re-education about the rules of the road, for cyclists as well as for drivers, I think there's something kind of dodgy about the Ottawa Police deciding to have their "cycling crackdown" this week, coinciding with Bike to Work Week. During a week intended to encourage non-cyclists to give it a try, is it really that productive to then pull them over and fine them for, say, cycling on the sidewalk or not having a bell?

If it were going to be a crackdown on bikes and cars - for example, if the cops were also looking out for bike-related infractions on the part of drivers, such as when a car right-turns without checking for cyclists or buzzes too close to a bike on the road - I'd be happier. But to take a week when there are hopefully more inxperienced riders out there, and then make cycling appear more dangerous, less acceptable, and more inaccessible? Lots of first time riders are scared in traffic. I was when I started riding regularly a couple of years ago. Don't scare that particular group of cyclists off the roads, just when they're being encouraged on the other hand to switch to the bike from their cars.

Not that I think bikes should be allowed on the sidewalk, but honestly, how many people actually know that? Warnings, yeah, sure. Friendly ones. Issued, I hope, by bike cops rather than cops in cars. But not fines. Not when you have no idea if the person you're stopping is completely green or a veteran cyclist.

Just to give you an idea, I think I usually follow the rules of the road pretty well. Some of them I deem just too dangerous to follow (there are intersections, for example, where I don't merge into the left turn lane because it's too sketchy - I use the pedestrian crosswalks instead. How legal is that? I honestly don't know.) And I'm actually sort of relieved that this week I have a car because I'm on the road for work: it means I won't get pulled over for my lack of a bell or for using the pedestrian crosswalks. If I'm avoiding the bike this week because of this crackdown, imagine how someone who doesn't normally ride would react. Way to promote cycling, Ottawa.
Posted by Kate (and Mike) at 10:26 AM 2 comments: 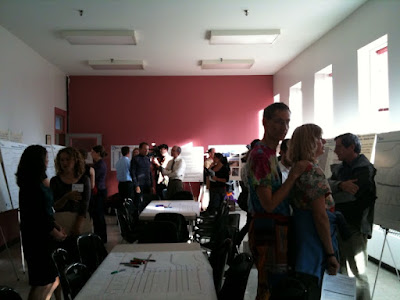 Last night I headed down to the Dalhousie Community Centre (confusingly, nowhere near Dalhousie Street) for the first of the city's four planned public consultations on a pilot project to put in a segregated bike lane running east to west through the downtown core. The area being looked at runs from Elgin to Preston, and from Wellington to the Queensway: 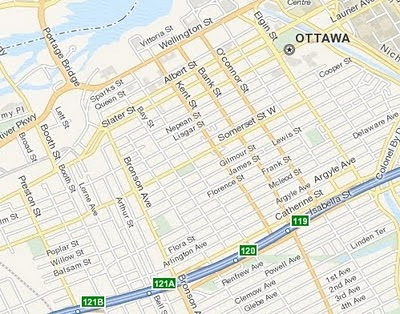 The bike lane would run down one of about 12 possible corridors in this area. Part of the point of these consultations is to get an idea which one would be preferable. And it would look, at least so far, a little like this: 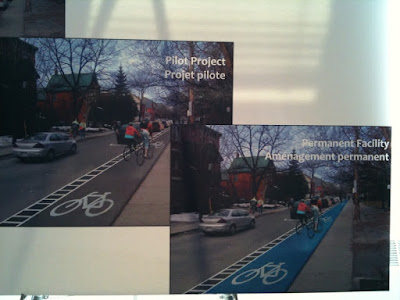 These lanes, if I understand, are meant to be separated physically from the motor traffic, by pylons or a guard rail or something. It's the physical buffer that is the main point; these lanes would simply be inaccessible to cars. (And yes, this would mean losing at least a lane of car traffic on whatever street is chosen.) This is just a pilot project so far - the city wants to know if the lanes would be feasible, if they would be used, and what impact they would have on traffic and business. It will be maintained for at least a year so they can evaluate whether it's worthwhile, and if it is, they're looking at extending the segregated lanes to places like Carling, Scott, and Island Park Drive. (Those three streets were identified as the areas the planning team were keen to tackle next.)

The plans and a lot more information are up at the City website, and there are two more consultations next week - Monday and Thursday night. There's also a questionnaire on the website that they're encouraging all and sundry to submit. The participants last night were a mixed bag, from die-hard cyclists, to recreational cyclists, to people who live in the neighbourhood and were curious, to at least one business owner, who seemed convinced that putting in bike lanes, thus removing car parking, would strangle all the businesses in Chinatown. Despite the planning committee's study results, which indicated that increased bike traffic is actually good for business, since cyclists are more likely to stop and shop on impulse than drivers. I have the feeling that the resistance to this plan, in any form, will come from the various BIAs - any change will feel to them like they're risking losing business, rocking the boat, messing with the status quo. Here's hoping the city sticks to its guns on the project - because you'll never know if bike traffic does increase sales unless you get a workable, successful bike solution in place.

I don't know if any useful information came out of the 'table session' I was in, in which we debated a lot but didn't actually come to any firm conclusions about which street would be best to remove a lane of traffic from. But it was interesting being there, being involved, meeting some other engaged cyclists (and even doing a sound bite for CTV) and it's certainly going to be fascinating to see what happens with the project. I know that what I really wanted to make clear was that I don't need a segregated bike lane on a quiet street like Cooper or Gilmour. Where I want it is right down Somerset or Laurier - down a main artery, where I need and want the protection. And to be honest, putting it on the commercial streets will give the city the best idea of its impact on business.

Well, damn. It's Bike to Work Week, and I could be eligible to win some pretty cool prizes for something I'd be doing anyway, except... this week I have to book a car to do school visits all over town with a children's author!

So, that means one extra chance for you to win some stuff. Think of it as my gift to you.

Check out the events going on as well - info sessions, route planning advice, gear, free bike tuneups: all kinds of neat things. I may have to drop in on some of these. When I'm not driving to schools (this is what a rueful sigh looks like.)
Posted by Kate (and Mike) at 10:53 AM No comments:

I'm pulling together a set for the Spoke 'n' Word Plot tomorrow - Almonte, JR's, 6:30! - but thought I'd hand you off to this lovely article that my dad found in the Globe and Mail. It made me smile. Maybe because the author also has a blue mountain bike.
Posted by Kate (and Mike) at 1:08 PM No comments:

This Sunday, Almonte's Spoken Word Plot is being renamed the "Spoke" n' Word Plot in honour of Mississippi Mills Bike Month... and I'll be performing, along with my fellow Kymeras! We'll be doing a set of poetry and storytelling celebrating bikes. There's an open mike at 6:30, and then we're up after that.

I think I have this blog to thank for this show, actually: Danielle Gregoire, the co-ordinator, contacted me saying something like "Hey, we're doing a bike-themed Spoken Word Plot and so naturally I thought of you!" I guess that's what you get for talking about biking all of the time.

And I suppose this is proof of what I've discovered since I started writing this blog: there's always something to say about bikes. If you're bike people, that is. People relate to their bikes. They anthropomorphize them. They use them as extensions of their personalities, their sense of style. They even, sometimes, name them. You come to realize, when you bike, that there is a culture out there, and I found that in my case, at least, you slip right into that culture and discover where you stand within it. You learn the ongoing conversations about infrastructure, city planning, bike lanes, helmets, traffic, tactics, gears, causes. It's hard not to become a bike activist when you bike: get clipped by a car, hit a nail in the bike lane, get trapped in a bad intersection, or read the comments left by ignorant people online, and you tend to develop some stronger opinions. And then you find yourself rubbernecking when a particularly nice machine goes by, and stopping total strangers to tell them how much you like their bike.

So yeah. There are poems and stories to be had out of biking! I'm really looking forward to the show.
Posted by Kate (and Mike) at 8:13 AM No comments:

This here is a PSA: The City of Ottawa's holding a series of public discussions about the downtown segregated bike lane proposal, June 7, 8, 10, and 14. They're in various locations around town, usually around 6:30.


"The City of Ottawa has initiated a pilot project for the identification of an east-west downtown segregated bike facility within the area bounded by Elgin Street, Preston Street, the Ottawa River and Highway 417. The bicycle facility is intended to be installed for a minimum of one-year on the selected corridor and it is being planned to be maintained throughout the winter months. The intent of this undertaking is to develop a recommended plan to provide a safe, fully segregated bike facility that better connects cycling facilities through the downtown."

I'll try and make it to one of these and report in! Next Monday, I think, in fact.