Sooner or later, Monty Python becomes reality. It's only a matter of time.

I had almost forgotten about this sketch from Monty Python:

Almost forgotten, that is, until I discovered, thanks to Bike Snob NYC, that reality has once again gone ahead and imitated art.

I give you: Bicycle Repair (Wo)Man 2015. The darker, grittier remake.

You're welcome.
Posted by Kathryn Hunt at 12:41 PM No comments:

Biking's normally less of a hassle. . .

I think I'm doing it wrong. At least, today and tomorrow.

I signed up for Winter Bike to Work Day tomorrow. For one thing, whoever's managing their website and social media is just so endearing about it. They've created a sense of friendly competition between cities and countries, and the interactive map with a snowflake for each rider has been a lot of fun. 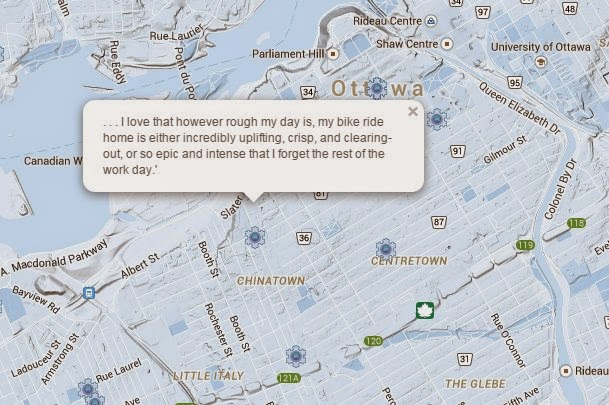 I've been cheerleading it online (Come on, Ottawa! Montreal's still kicking our butts! Are we just going to take that?), and then my friend Ian, in London, ON, told me I'd convinced him and he was going to take the bike to work even though he normally doesn't ride in the winter. At that, I realized that for me not to ride to work that day would be downright weird.

Here's the catch. If I was working at my office downtown it wouldn't be a problem - about half an hour, depending on conditions. I do it a lot anyway.

But my life being what it is, I have a couple of different gigs. One of them is way out in the back woods of Gatineau, on the other side of the river in Quebec. And lucky, lucky me, the guy I work for wants to work tomorrow.

That would make my route to work look something like this: 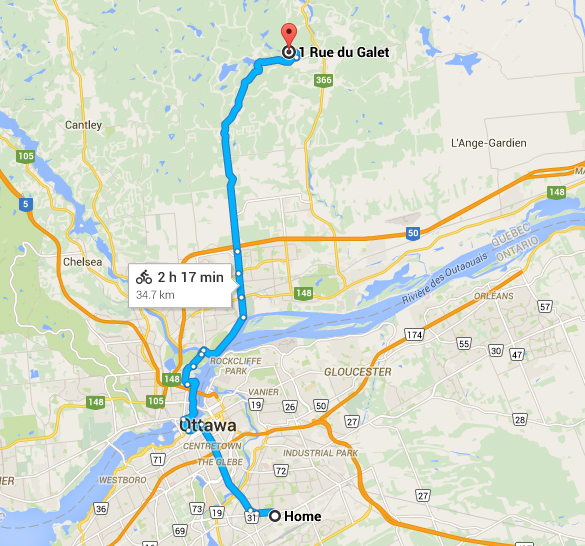 Yup, that's 34.7 km, 2:17 in good (read: summer) conditions. Also note: that bit on the Quebec side where it hugs the river is the Voyageurs Pathway, which is part of the Route Verte - a lovely, fairly widely renowned cycling network - and one that I'm willing to bet isn't cleared in winter. Not enough to actually ride on anyway.

Okay, so this will take some doing, I thought, but I can do it. Today I had to drive out to Quebec. So this morning I wrestled my bags and my bike, with my travel mug in one semi-free hand, down to the parking garage, then spent a swear-inducing several minutes trying to get the front tire off and the (utterly filthy) bike loaded into the back of the car, while attempting not to get salt stains on my clothing. (I failed at that last bit rather spectacularly). And dreading having to put the front tire back on in the cold.

And then I'll be committed, because I will only have the option of the bike come tomorrow morning, so I'll get up, get on the bike, ride to the car, wrestle the bike back into the back of the car (this time covered in all-new, fresh slush and salt and grit), and drive the rest of the way to work - and time it so I'm not late. So far so good. Now to figure out where I can leave the car overnight without getting a ticket, or towed, or plowed in, or . . .

So here's what's been reinforced here. Biking is really easy. Driving is less easy (and more expensive), because you have to actually put the car somewhere. And a bastard hybrid of biking and driving is a royal pain in the butt.

And a cheerful, friendly, fun social media presence will make me do things that are a royal pain in the butt for no good reason. Dangit, Winter Bike to Work Day.
Posted by Kathryn Hunt at 9:25 AM 1 comment:

It's 11:00 or so at night: I surface from the noisy downstairs space of House of TARG, where I've been for a friend's birthday party, to discover that the damp air I noticed on the way there from the office has done the inevitable and turned into a cold overnight snow, one of those ones with the tiny flakes turning all the streets white. There's a thin layer of churned up snow on the streets, with thin black tire tracks worn through it, in spots. The air is filled with whirling miniscule ice flakes. And I realize I'm happy about that. 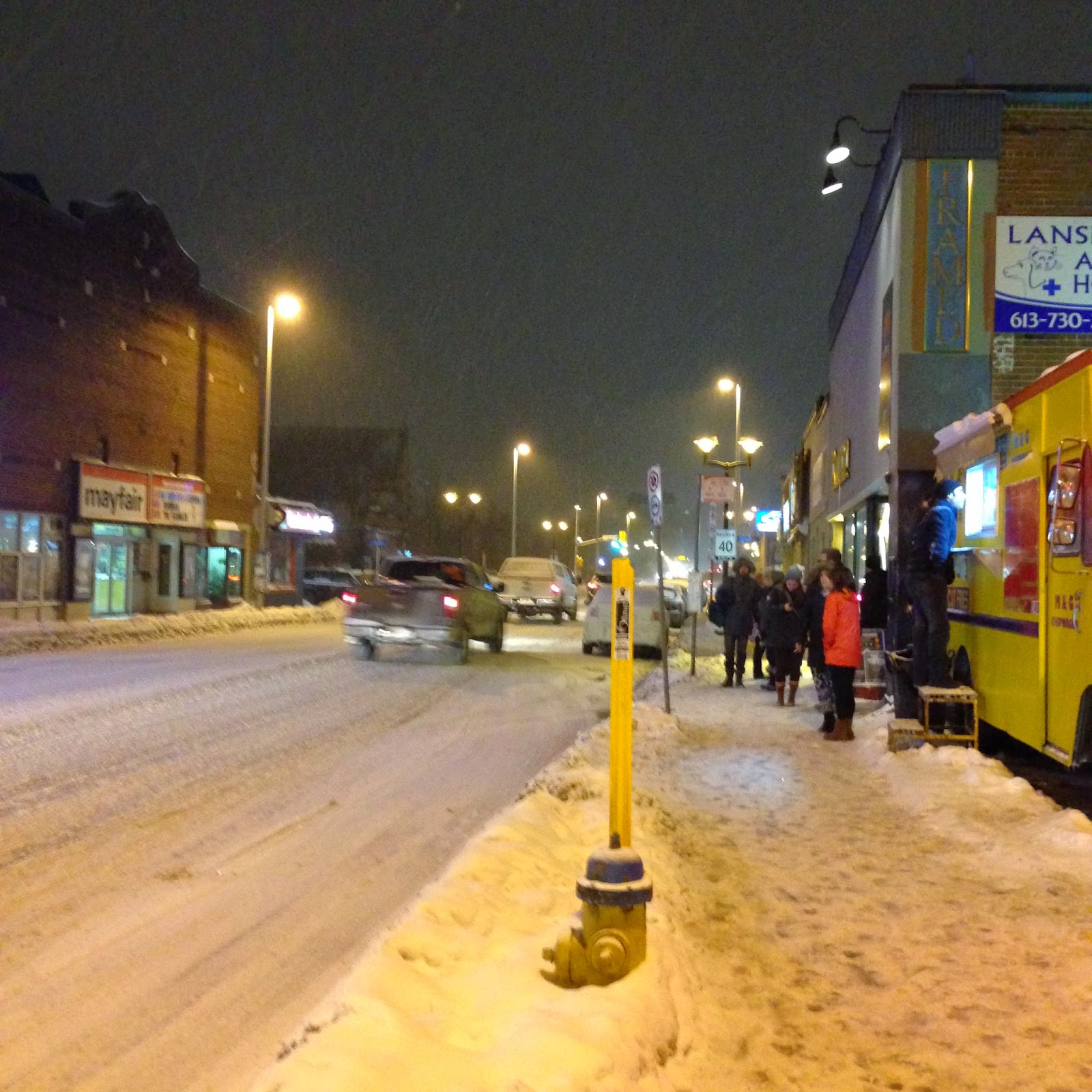 I get the bike unlocked and brushed off, I get the lights snapped into place and turned on, and I'm a little sad that the battery on my GoPro is dead so I can't get video of this, because I know it's going to be a good ride. Even if it's down the worst stretch of my usual route - Bank Street beyond Old Ottawa South. But this is going to be great.

I get on the bike and start down the street, riding in the streak of bare pavement left by the cars or, sometimes, in the slightly thinner snow that's accumulated. The cold air makes me blink a lot and the snowflakes get in my eyes, so I have to focus on the road ahead of me: patches of thicker snow where I'll have to watch my balance, searching for the thinnest covering. My fingers are burning cold for the first several minutes, and at red lights I stop and pull my hands into fists inside my gloves to try and warm them. I resist breathing on them, which will only make my gloves damper, and colder.

And sure enough, by the time I'm climbing past the Billings Bridge Mall, the familiar fiery rush moves out through my fingers, and soon they're not just comfortable, they're warm, as if I was holding them to a fire. 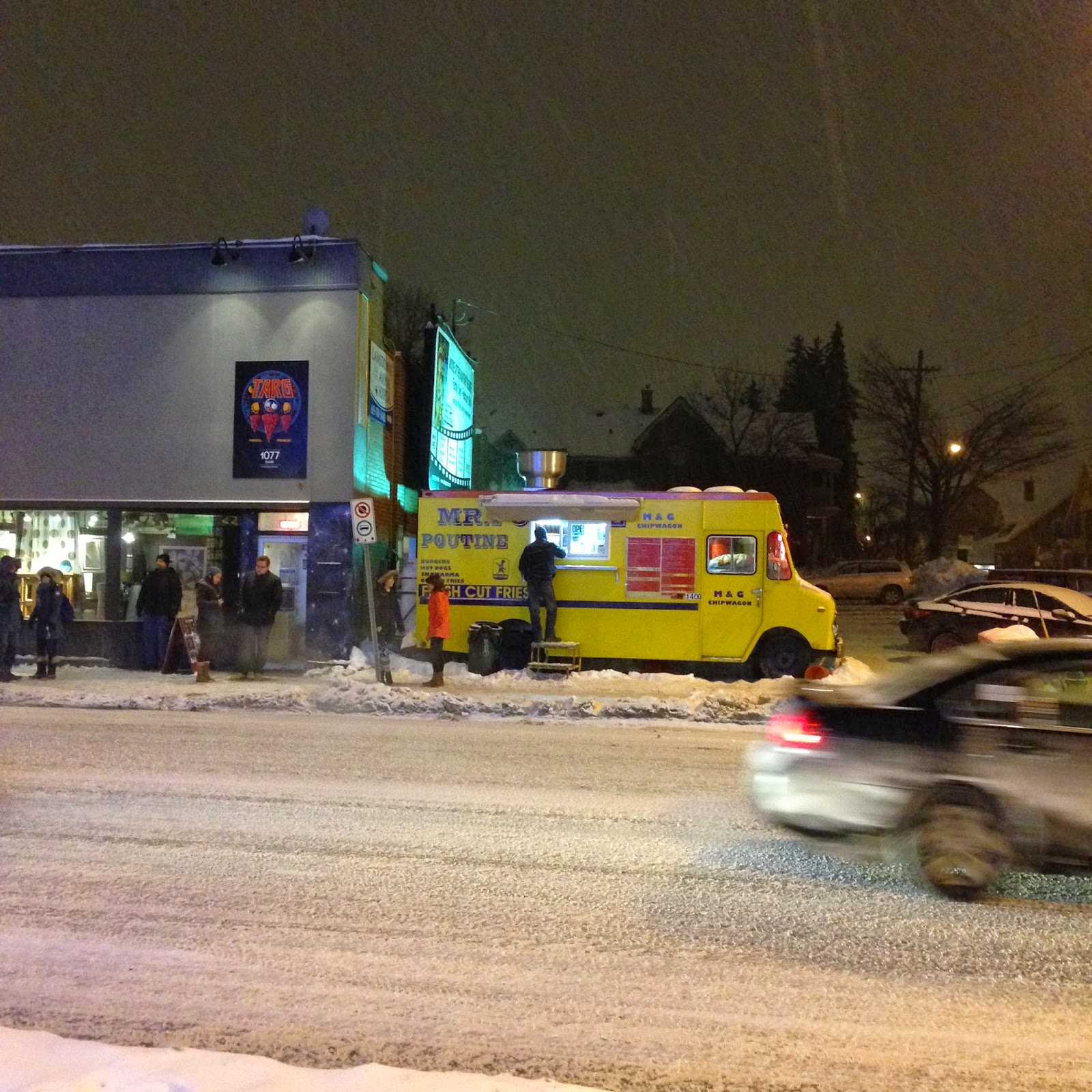 The cars on the street are slowed by the snow, and they move way out to pass me, because where I have to ride is just where their right tire would be, if the driver were to pretend I wasn't there, which she of course is not going to do. So the drivers have to slow down and move over into the thin layer of snow to pass, and they give me a wide berth.

I can watch my breath steam out in big clouds. Sometimes it blows back into my face and the edges of my glasses steam up. At the intersection of Bank and Heron - an intersection I usually hate - I ride across, then turn to head east on Heron, and plant my tires firmly in the  track left by the cars. Someone pulls up behind me in a sedan, waiting for the light. I stay where I am, and though my back tire slips a couple of inches before catching when I start off, I climb the hill out of the intersection without ever once cringing out of the way of passing cars. I stick to the clearest pavement.

My home street is as snowy as the rest. I angle the left turn into my driveway, and stop for a moment after my lights are turned off and I've hefted the bike up with one hand, to look up at the swirling snow and the greyish-yellow sky with the city lights reflecting off it.

I kind of don't want to go inside yet. 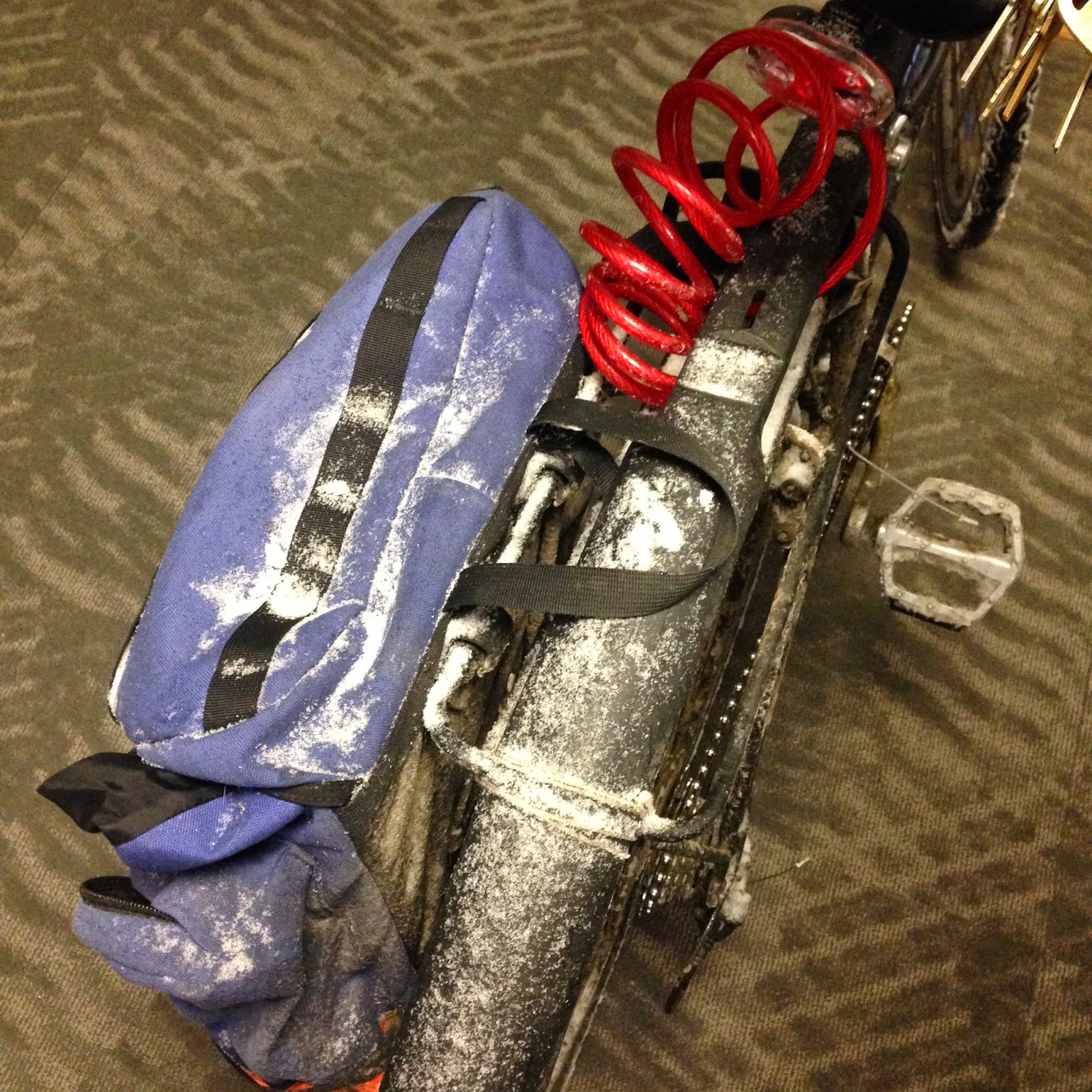 Posted by Kathryn Hunt at 9:16 PM No comments: