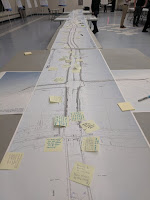 Tonight was another public session/workshop on the Bank Street South redesign. I covered this way back when and was astonished to see reasonable cycle tracks along the entire project, fewer slip lanes, and generally intelligent and humane design. So after my radio show tonight I jumped on the bike and pedaled (along Bank Street just to remind myself what a hostile hellscape it currently is) over to the Jim Durrell Arena, to see what had been done with the plans.

We're still in the functional design stage, and really it's after this that the rubber hits the penciled-in bike infrastructure, if previous experience has any weight.

The cycle tracks are still there, y'all.


I have been keeping an eye on a couple of things with this design. To my mind, there isn't really much to object to, from the point of view of the people who usually object to cycling and pedestrian infrastructure: the plan doesn't actually eliminate any motor traffic lanes, the street remains a "designated truck route", entrances and exits to retail parking pretty much stay the same, and the only real inconvenience to drivers is a lower number of dedicated right-turn slip lanes (thank you) and a few sharper turns. And from the point of view of a cyclist, the whole thing is so much better that I want it now. now. now. NOW.

Raised intersections aren't possible on a street like this, but the increased number of raised medians might actually contribute to lower speeds.In a couple of places, the proposed separated left-turn lanes have been reverted to two-way "suicide lanes" - I asked one of the consultants there about it and he couldn't tell me why, but thought it had something to do with the businesses on either side of the road (businesses that aren't in strip malls and so don't have a controlled-entrance parking lot) wanting people to be able to turn easily into their lots. I left a note about the risks of left-turning drivers at this point not considering cyclists on the cycle tracks before beginning their turns.

But the cycle tracks are still there.

There's a lot to be optimistic about in this plan. We've got a year or two to keep an eye on it: we don't want to let it slip. There are also a couple of spots where we might want to dig our heels in: mostly at the north and south ends which, unfortunately, end at the bridges. The cycletracks dump you unceremoniously into traffic at both bridges: I think we might be able to do something to make it less dangerous at the south end, where the cycle track takes a sharp left across the exit ramp by the Home Depo. That should be signalized or controlled in some way, because otherwise drivers won't expect that sudden jag to the left from pedestrians and cyclists and bad things could happen. At Billings Bridge, we're still, unfortunately, left to the tender mercies of the merge and sharrows that already exist.

But it is still so good. On the way out, I spoke with a man who seemed to be connected with the BIA: I said I had a couple of comments and that I rode my bike on Bank a lot - more than I want to, really - and he got my number and seemed really interested in talking to a bike rider. I'll see if he calls, and what he wants to say. I think, in this one case, that there isn't much reason for the BIA and cyclists to come into conflict: we might even have a lot in common. Just this once.

I'm hopeful, still. Again. Don't mess this one up, Ottawa.