Making connections. Or not.

There's a stretch of path that vanishes in the winter. (Well, there are many, all over the city: this is one of them.) It runs down the hill from the intersection of Laurier and Nicholas, through the trees, to the edge of Colonel By Drive, where there is a "crosswalk" (well, a bit where the curbs are cut down) over to the canal MUP. Another branch runs parallel to Nicholas, and takes you to the underpass to the University of Ottawa one one side, and the signalized crosswalk to the canal path, and the Corktown Footbridge on Somerset, on the other. Thusly: 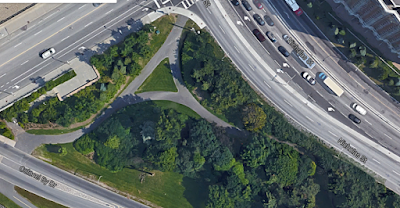 In the summer, this is just about the only reasonable way to get to and from the Byward Market in this area. Your other options involve leaving the canal pathway, crossing Colonel By at an unsignalized intersection, and riding on Colonel By until you can get to Daly or Rideau, or crossing into campus and weaving your way through there until you can find your way onto, say, Cumberland?

In the winter, this path is not cleared. It catches me out at least once a year, as I cut across Laurier coming from an event in the market or something and discover that I can't get to the canal. Occasionally, I've had to pick the bike up and carry it through the snow down the hill to the crosswalk.

I've said before that the Byward Market suffers from an unbelievable lack of reasonable ways to access it by bike or on foot - especially for a market and nightlife district designed for pedestrian tourists to stroll and shop. It is cut off on all sides by highway ramps connecting the 417 with Autoroutes 5 and 50, or arterials leading to them, like King Edward, Sussex and Nicholas, or by dead ends and one way streets, or by the mess of car-centric, pedestrian-hostile intersections on Rideau around the War Memorial.

This path actually offers the most convenient and safest way to get in, for anyone coming from the east side of the canal. It links the Market and Ottawa U campus, not to mention the Corktown Footbridge on Somerset, which is a major bike and pedestrian link across the canal. It would be a key link in the cycling and walking network, if it were cleared in winter and reliably lit in summer.

I asked Councillor Fleury's office if there was any chance of getting the path cleared. I just heard back, and well. . . The path is owned by the National Capital Commission. Which should tell you something.

The NCC is not interested in everyday mobility. It is not their concern whether residents can get around on a day-to-day basis. The NCC's position is that they only maintain the pathways that support "winter animation programs," that is, the Rideau Canal Skateway. Basically. And those of us that use the Canal MUP to get across town also know that it's not cleared with an eye to using it for travel - especially not the Colonel By side. It's cleared with an eye to letting skaters schlep their skates to the stairways. Most of it is a slushy, puddle-clogged, or traffic-rutted icy mess.

They say they don't have the budget to clear this segment of pathway. But they own it, so the City doesn't clear it. (A similar confusion persists about who is responsible for the bridges across the Ottawa River, meaning that pretty much every year there is a discussion between cyclists, the City and the NCC about who is supposed to move the snow, and every year, it seems, the answer is different.)

My contact at Councillor Fleury's office asked if the City would be able to clear it, but got the answer that "the city's snow clearing budget is under tremendous pressure as it is" and they're not adding any paths. But they did outline a future route to the Market from the canal: 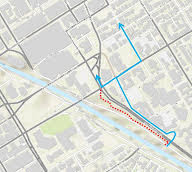 A new MUP would be built through campus, and from the underpass/crosswalk/bridge, you would do this:

"An alternative to the red dotted line route for cyclists heading between the Col By Pathway and the Market area is shown below as a blue solid line.  This new link is planned to be implemented just after the Confederation line opens. It incorporates the existing underpass at U Ottawa station and a new multi-use pathway planned east of Nicolas, which terminates at Laurier and Waller. Once a cyclist reaches the signals at Laurier and Waller, they can then either go along Laurier and east on Cumberland or West to Nicolas then north to the Market. The plan is to add the blue markings to a future Winter Cycling network."

The councillor's office rep basically said, "the bad news is that we can't get it cleared now, but the good news is that there are plans to address this link in the future."

So that's something? I suppose? In the meanwhile, I guess we keep MacGyvering winter routes using the available clear pavement.
Posted by Kathryn Hunt at 8:20 AM