So, a while back, the City of Ottawa decided that there needed to be a time limit on so-called "spontaneous memorials" (in response to about seven complaints). By that they meant ghost bikes. And down the ghost bikes came, including Meg Dussault's much-loved bike at Bank and Riverside.

In late June, I noticed that someone had drawn a bike back on the wall where Meg's bike had been: something I'd been wanting to do. 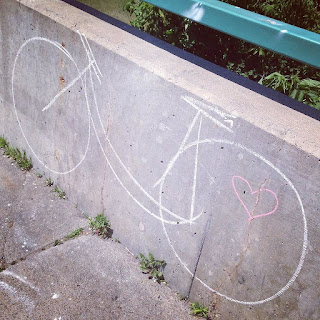 But rain and the elements being what they are, it was gone again some time after that. Or, possibly, the city washed it away. We don't know.

I said at the time that I wanted to get some chalk and go put it back up, but then got overwhelmed by Canada Day and a fairly busy couple of weeks. But never fear: Darlene McLeod (otherwise known as @UrbanSlowLife) was on the job.


By the time I saw her tweet, the rain had washed it out again. But I said I'd grab some chalk and stop by on the way home. So I did. And we agreed, over Twitter, to keep an eye on the place and keep putting the bike back up as long as we can.

I pulled over on my way home, broke out the sidewalk chalk, knelt down by the concrete wall, and started drawing. Personally, I was pretty pleased with how it turned out. Apparently when I draw a bike, it's a stepthrough cruiser. 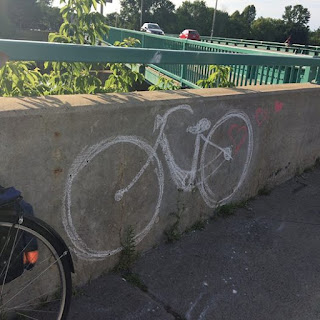 The next morning, I told someone at work about it, and she said, "Oh, that was you? I saw that chalk bike this morning when I went by there!"

This weekend, it bucketed down rain. So, on Sunday, on my way home from a proofreading meeting, I stopped and put the washed-out bike back up. This time I gave it fenders, and added Meg's name in red behind the back wheel. 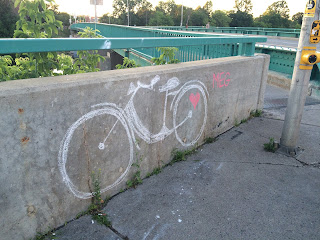 I said, on Twitter, that I thought people should just adopt a site where a ghost bike once was, and do the same. Just chalk it back up every time it washed out, until something was done about the infrastructure that had resulted in there being a ghost bike there. Because there ain't no bylaw against drawing things with sidewalk chalk. Yet.

And I paraphrased Arlo Guthrie, because I couldn't help it:

Well. We've got at least three. At least an organization.

Tonight, I was on my way home late, and as I rolled over the Billings Bridge, I glanced over to see how the bike was doing. And stopped, and went back. Because someone had been by, and embellished the bike, and left a neatly lined up set of sidewalk chalk on the rail beside it. 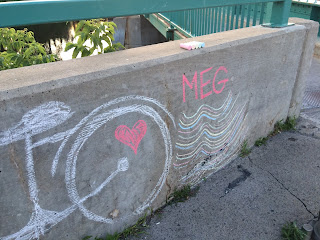 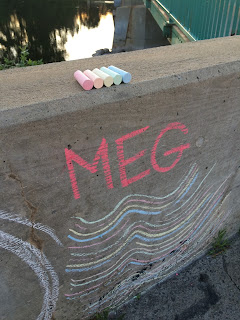 I don't know who it was. But it made me really happy.

Cause that's what it is, friends - the Chalk Bike Anti-Massacree Movement! And all you gotta do. . . is join in the next time it comes around on the guitar. 
Posted by Kathryn Hunt at 8:13 PM