It's International Women's Day, and for some reason - well, really, for obvious reasons - I'm thinking about bicycles.

Bicycles are quiet, easily overlooked, unassuming heroes in the history of women's independence. I'd never really thought about them as the emblems of freedom that they are until I got into cycling, discovered the late-1800s European cycling craze, and then discovered what its impact was on women. It's hard to do much reading about cycling without coming across Susan B. Anthony's famous quote that bicycling had "done more to emancipate women than anything else in the world."

Check this piece out at annielondonderry.com - Women on Wheels: The Bicycle and the Women’s Movement of the 1890s - for a decent overview.

(I have to add, too, that while I was poking around the 1890s, I discovered that H.G. Wells wrote a novel about bicycling: The Wheels of Chance. It's here on Gutenberg.org for your reading pleasure.) 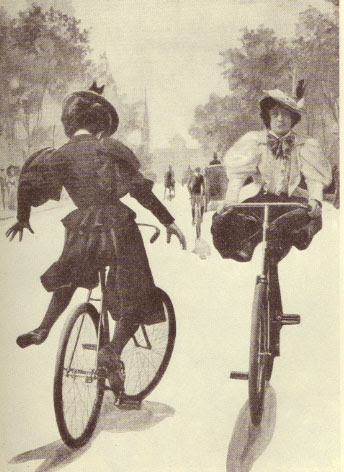 It wasn't just that bicycles gave women a way to get around independently. They also normalized women - not just labourers but all women - being physically active (and oh, the panic about "bicycle face" and the strains of cycling on the female body). And they paved the way for less restrictive clothing, as women wheelers realized that voluminous skirts were a total pain in the ass and started hitching them up, or giving them up entirely in favour of more practical bloomers. "The bicycle will accomplish more for women's sensible dress than all the reform movements that have ever been waged," said Demerarest's Family Magazine in 1895.

Anyway, there is all that history in Europe, but bikes are also still fulfilling that role all over the world. Bikes are still subversive.

Just as a couple of examples: apparently, there are laws - patchily applied, but on the books - against women riding bikes in North Korea. I like to think it's because deep down, authoritarians know a woman on a bike is a dangerous woman on some level. And last year, in Yemen, a woman tried to organize an event to encourage more women to ride bicycles in the face of a fuel shortage - women are allowed to bike, by law, but it's still a social taboo. Some people (koff, "men," koff) found the idea of women on bikes so unthinkable that they insisted the photos of the event must be Photoshopped or that the women must actually be men in disguise. And in many places a bicycle actually represents a chance for a girl to go to school, or for a woman to run a business. World Vision has a "Donate a Bicycle for a Girl" campaign to provide bikes in countries like India and Cambodia where girls might live too far from school to walk, or the trip might be too dangerous. Bicycles for Humanity does something similar.

So for IWD, it's worth paging through World Bicycle Relief's Women In Motion list: women competitors, entrepreneurs, students, and philanthropists all over the world, all with that one thing in common. . . bikes. Still being subversive, still causing social change, still fostering independence.