I was on my way home from a downtown meeting this afternoon and heading up Heron Road when I was passed by a road repair truck, stinking of hot tar, and its sidekick, that truck with the flashing yellow arrow on it. I kinda hoped when they passed that they were heading for some of the more horrific potholes on Heron (some of which appeared in my Potholapalooza post a couple of days ago) . . . and lo and behold, traffic slowed up and came to a stop behind them as they pulled over to tackle, well, this one actually: 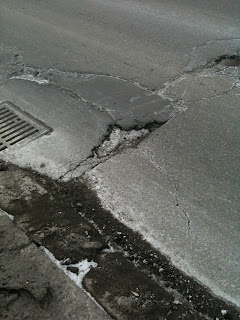 So, I ducked onto the sidewalk (rather than try to pass, on the left, a lineup of about four cars plus the repair trucks), and as I passed the two repair guys I stopped the bike, caught the eye of one of them, and called out, "Thank you!"

He grinned, and I went on my way. So there you go. If you see someone out repairing the street and you get the chance, tell them thanks for me, and I'll do the same for you.


(In other good news for the day, it looks like the NCC is looking at putting in a segregated bike lane on Wellington! It would run from the Portage Bridge to Bay Street. This is fantastic: that bit of the street is just awful to bike down, but hard to avoid in some cases. Hooray.)
Posted by Kate (and Mike) at 10:22 AM