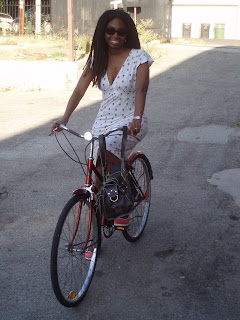 A friend sent me this link, to a blog on academic style (or stylish academia?) called Academichic.com - a post on cycling style. Right now going through these pictures causes more jealousy than inspiration - hard to be stylish on a bike in Ottawa in November. I'm living in a daily uniform of jeans (one leg tucked into a sock) and three layers, the top layer being the zip-out fleece lining of a light winter jacket. Sure, I could bundle up in a nice coat, but I don't want all my nice winter coats to wind up with a spattered stripe up the back, and that's what happens. Ditto the Victorian walking boots I just picked up from Clockwork Couture - they'll just get soaked. And do heels fit inside the shoe covers I got at MEC? (Actually, they might. Would look hilarious.)

I guess I feel like there are certain limitations connected to the kind of cycling you do. I'm a couple of miles away from downtown by any estimation, and the roads I take to get there are big, loud, dirty, and busy. Mike is as burly and gutsy as he needs to be to get me from place to place, but he's not really conducive (as I've mentioned before) to pretty clothes. More than Mike, though, the roads aren't. You just don't see women like the one in this picture beyond the confines of the true urban. Heading out to the suburbs you see the folks in Spandex and clip-toe shoes, with the mirrors on their helmets, or you see people like me in jeans and hoodies, but you're less likely to run into a sundress and heels on the way down, say, Conroy or West Hunt Club. On the pathways, maybe: once the pathways run out, someone dressed like that starts to look a little like a Minnesota tourist family that's just wandered into the wrong part of Amsterdam.

But, for the kind of objective pleasure that flipping through magazines, or gourmet cookbooks, or watching Fashion Television affords, this post is just great. So are:

Girls and Bicycles
Copenhagen Cycle Chic
Let's Go Ride a Bike
Chic Cyclist (and I love the current post "You Don't Have to Ride Your Bike" because it states perfectly something I didn't even realize I wanted to say!)

And just to plug Clockwork Couture, because I loves me my steampunk (although watch out for their shipping department, they can be a pain in the ass): their "casual cycling capris" are want-inducing. Although they don't make them in my size I guarantees ya.
Posted by Kate (and Mike) at 9:12 AM