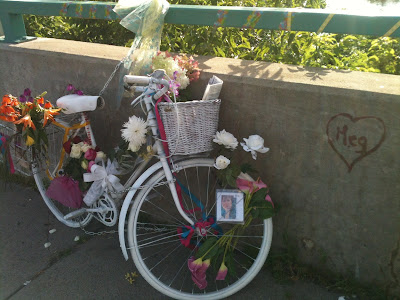 I rode right past this this afternoon. I was on my way north on Bank; cursing the lousy pavement, the large cargo trucks, the narrowness of the road. As I went across the bridge at Riverside, I remember thinking about the new sharrows that were painted on it just a couple of months ago, and how they completely fail to make me feel any safer when the dump trucks rumble past on their way to the construction site at Lansdowne, a mile down the road.

So I rode right past this. It was on the other side of Bank, at the corner of Riverside where the bike path crosses and then continues along the river. I didn't see it: I was looking ahead for potholes, checking behind for cars. I was feeling jumpier than usual because after a two-week vacation out of the country, I hadn't been on the bike in a while, and it always takes a while to get the courage back up and running.

On the way home, though, I saw it, as I pulled up at the red light. I knew it had to have happened in the last two weeks: I would have heard about a cycling death if I'd been in the city. So I stopped.

As I stopped, so did a few other people. A woman in a motorized wheechair, and a girl on a bike with white tires. "Did someone die?" the girl asked, and the woman nodded, solemnly. I didn't say anything. A couple of other bikes pulled up; they continued on when the light switched to green. I didn't, for a moment. Bikes swung by, crossing Bank on their way along the multi-user path on the river, or continuing with the traffic along Bank. I leaned Mike against the streetlight, walked up to the ghost bike, and read some of the news articles and obituaries tucked into the basket and sheathed in plastic sleeves.

The other cyclists and pedestrians moved on, and eventually so did I: what else was there to do? I kicked my leg back over my bike, and I headed back out into the rush hour traffic heading south on Bank.
Posted by Kate (and Mike) at 4:42 PM